So you probably saw the cute photo yesterday of Cinna and Ruby touching noses, right? What you didn't see was the squealing, spinning, threatening to kick, and when Cinna lunged into her stall guards and bent one of my eyehooks.... Haha. Mares, amiright?

Cinna is quite used to being top dog -- she's ruled the roost with an iron hoof since her dam left almost two years ago -- it's an attitude she came by honestly, as her mother was Queen Bee before her. The geldings mostly roll their eyes and let her buffalo them. But I have a feeling poor little Cinna is gonna get her world rocked as she adjusts to Ruby's presence on the farm.
Last night we had the last of our unseasonably warm weather -- 72 in December, what even is this? We were under a severe thunderstorm watch, and the 10 day forecast looks bleak (aka cold, which I hate). So I booked it home from work and immediately went out to grab Ruby for a quick workout. I really wanted to ride, but I didn't want to push my luck -- she hadn't worked under the lights yet, and she also isn't acclimated to the goats (which I realized when she almost dumped me riding sidesaddle during our photoshoot last month, hahaha). 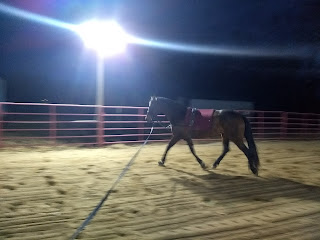 I tacked her up quickly and tossed her on the lunge line. She had a few spook-and-scoots on the side of the arena closest to the goats, and she was listening intently to them bellowing for their dinner, but she acclimated quickly. By far and away the most interesting external stimuli to work through was Cinna on the other side of the fence -- my main dry lot adjoins the arena, and Cinna apparently took great exception to the fact that I was working Ruby and not her. She was waiting with ears pinned and neck snaked, occasionally lunging over the fence and trying to take a chunk out of poor Ruby. After some stern admonishment, she finally consented to standing a few feet off the fence, looking very grumpy.
I guess I know what my next project is -- hot wire to keep her off the arena, lol. We talked about it when we first built it but the boys give no shits about me working Cinna in there, so I shelved the idea. But clearly I need to resurrect it! 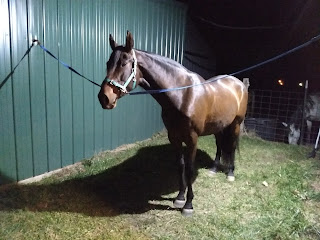 About the time I finished up it started raining, and the forecast was calling for heavy storms, so I pulled everyone in a few hours early. At that point I think Ruby had had about enough of Cinna's bluster, so she put her in her place pretty sharply over the stall guards -- #bossbitch


Clearly the pecking order thing is gonna take some time ;) and unattended stall guards will not be happening any time in the near future, lol. They sure keep me on my toes!
Posted by TrainwreckInTeal at 6:00 AM