Last night was randomly 70 and sunny when I got off work. I knew it was supposed to be nice (although not quite that nice!) so I had preemptively asked DH drag to the arena on Wednesday. Hard to believe that it's been like three weeks since my last ride with Cinna, the one where I first started playing with Equilab. Thanks weather, you suck.
Obviously, I was stupid excited to climb in the saddle! Knowing Cinna's propensity for being, errrr, excitable when it's a super nice day and she's been off for a bit, I opted to toss her out on the lunge first. Definitely did not regret that decision, when on her first canter transition she squealed as loudly as she could and porpoised through the air. Yeah. Fun times. Tracking right, she absolutely COULD. NOT. TROT. MUST. CANTER. I finally got a few good circles out of her then called it quits -- I knew she wouldn't have much stamina (soooooo unfit), so I didn't want to waste her energy on the line, I just wanted to get out any squirreliness.

About the time I climbed on, DH got home, which was reassuring -- always nice to have my 911 dialer available should things go south ;) I'm very much a plan for the worst, hope for the best kind of person.... haha. I walked her for a while and caught up on work things with him, then put Cinna to work. She was very excited for every upward transition, but was easily checked with a half halt, or when I slowed my posting. The first canter transition was equally as exciting, as she vacillated between knowing she needed to canter nicely but also really, really wanting to buck with excitement. She settled for bunny hopping a few times while I giggled at her. As I rode by DH, he commented that she looked ready to be naughty -- and I replied that she was thinking about it, but that she knew better. She did settle into her effortless canter that is so pleasant to ride, and I just grinned from ear-to-ear. 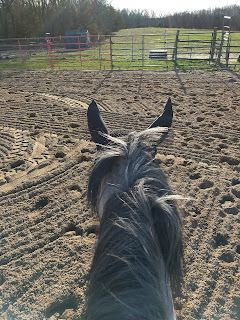 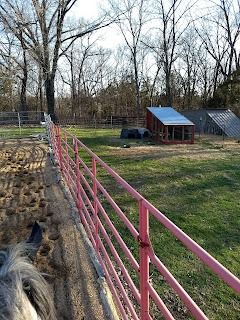 She was so excited to be out and about riding that she totally forgot to play her "I'm terrified of new things" game -- in the photo above you can see the chicken coop that we repurposed for a shelter for the young goats for the few months they have to be separated from the adults. It's "new" since the last time I rode her, but she didn't even bat an eyelash. After about 20 minutes of light work, she was puffing and sweating, so we just hacked on loose rein around in circles. She was being so good I decided to attempt the back field. We walked out alone, and although she tensed up and wanted to stop, she let me push her on every time. I picked a stopping place, then turned around and walked back. She wanted very badly to jig, but I'd stop her and talk to her for a minute, then resume walking. We walked past the arena (spooking hard at the chickens, who were fighting again -- if you missed my IG video the other day, I'll include it below, lol). I made her walk all the way down the driveway, stop, and then we walked back to the arena. It was a short ride (only about half an hour), but I'm super happy that she was able to pick up where we left off, like always. Hopefully the weather starts remember that it's spring soon so we can start riding regularly! 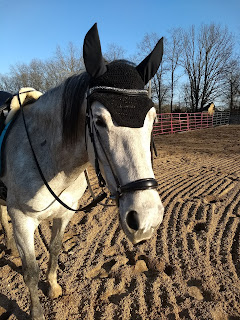 Mostly, I was just excited to soak up the beautiful weather on my best grey girl! Although it's almost worse that the weather keeps teasing us with occasional nice days before plunging us back into cold, gloomy grossness. Ughhhhh. OK I'm going to end on a positive note, enjoy this silly video of my roosters fighting earlier this week (I broke it up, don't worry). And happy Friday!