Today is officially the two year anniversary of the creation of this blog. Normally I'm one to get pretty excited about anniversaries and milestones, but my heart just isn't in it right now. That was probably pretty clear in my last post, and I'm still mentally sorting through some of the things I referenced then. The weather has continued to be nice (I guess Missouri finally decided to give us a spring!), and I've been spending lots of time outside, even if it's not necessarily riding.

I'm not sure how to even write about this, so I'll just get it over with. Blanca (one of our pregnant goats), lost twin kids last Friday. I haven't had a ton of experience with animal deliveries (not since Cinna almost 6 years ago), but both DH and I have gotten a crash course in goats over the last year. When she kidded last fall, we just came home to the babies already dry and up and nursing. This year, we were much more in tune with her normal behaviors and were able to identify when she was close. She went into labor overnight Thursday, and what started as a seemingly normal presentation (two hooves and a nose) went south very quickly -- her twins were tangled and instead of two legs from the same kid, we had a leg from each. We called the vet out, but it wasn't in time to save the kids, and things are still touch and go with Blanca (although she does seem to be trending a little better every day). The silver lining of this is knowing how many good people we have in our corner -- I had friends to call at 2 am, another Facebook friend got on the phone with me to talk me through trying to reposition the kids while I waited for help, and even more friends have been checking in with me for status updates on Blanca. In a day and age where people are opting out of social media because of data breaches and vitriol, it was nice to see it used for good. Even if it was a tough reminder that farm life is hard, and you can't always save every animal.

Yesterday we finally started to get back into the swing of normal things a little, running some errands and spending some time with the horses in the afternoon. One of the items on my "horsey to-do list" this summer was to install a post to tie the horses to for bathing -- my current system is to attempt to ground-tie them near the hydrant, which works out about as well as you can imagine (in that it doesn't, haha). I was just going to buy a post from TSC and a tie ring, but when we were picking up a telephone pole from one of DH's friends (that apparently is destined to become a ridiculously large flag pole in my front yard, hooray), the friend offered me some of the smaller sections of pole he had cut up. He also had some of the old hardware from the poles, and one of the eyebolts appears to be the perfect size to tie a lead rope through.

DH also (unprompted from me, yay!) pulled Trigger out for some light work. First he had to shed off some of the winter coat Trigger had been holding on to, so I'm sure the birds will be quite excited. I pulled Ruby out and clambered on bareback to walk around in a halter and lead while the boys worked. Ruby was her normal superstar self, which brought a smile to my face. I unclipped the lead and used it for a neck rope and we worked a little at the trot. She's such a fun horse. Once DH finished up he suggested we meander around the property a bit. 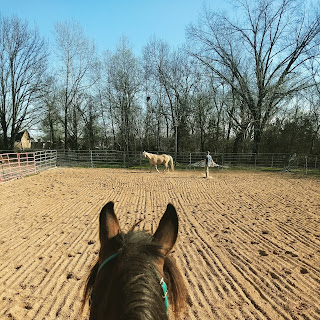 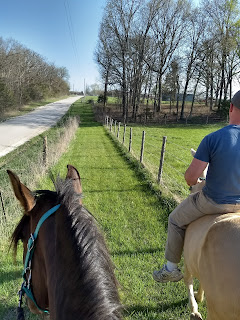