Long time no write! Mostly because I have nothing to say. The weather has been a complete and utter shit show, so the horses are basically muddy, feral wildlings. It's spring in MO, so this isn't unexpected, and I'm trying not to incessantly complain about it, but it's really wearing on me... we can't get things to dry out because a) it won't stop raining and b) the sun won't come out. And then of course yesterday it snowed -- because why not?
But I do finally have something to write about, because Friday was my annual vet day to get all the horses new Coggins, check teeth, the works. I do most of my own vaccinations, but I have to have the vets do the rabies vaccine -- and while the geldings are drunk for their teeth, I usually pay to have their sheaths cleaned too. It's one of those things that I can do myself, but I don't mind paying someone else to do it if they're already sedated anyway. Normally I have the vets out in February on one of the two state holidays (so I don't have to use vacation), but this year got away from me a bit, so I ended up having to take a Friday off. It worked out well though, because Friday was the only decent day weather-wise in basically the entire month, so I got SO MUCH done not being at work.
I left the horses in after breakfast so they would be dry and reasonably clean (perks of the temps running lower than average the last few weeks is that since the horses have been sheeted, they weren't muddy!). I couldn't do a ton about the cement-like mud they were caked with from the knees/hocks down, but I did brush out everyone's manes so they looked slightly less feral. The vets were right on time -- they had two trucks and four students, so we had a pretty full house! We started with Ruby and Cinna -- since they are in (semi) regular work, I assumed they'd need their teeth floated, and I was right. Ruby needed multiple doses of sedation to be cooperative (the starting dose didn't even make her blink), but Cinna was shockingly adult about it (which hasn't always been the case, lol). The senior vet, who has been the one doing our annual visit for a few years in a row commented about how much more "worldly" Cinna seemed -- maybe at coming 6, she's finally growing up a bit?
We left the very drunk girls in their stalls, sans hay, to sleep off the drugs, and moved on to the boys. They both got skipped for floats last year, because they didn't desperately need to be done, so I kind of assumed they'd need it. The vets started examining Jack, and I was pleasantly surprised to hear he didn't have any sharp points or hooks, so he could be skipped again. They did sedate him for his sheath cleaning, but apparently he's becoming a lightweight in his old age -- a very minor dose of sedative had him practically on the floor. He was a champ for his stuff, and then he hung out in Trigger's stall with one of the doctors to wait for the drugs to wear off -- it took forever, so she was loving on him, and actually cracked some tartar off his teeth while she waited. We had a quick discussion about his weight and how I'm managing him now, since this is possibly the best he's ever come through winter (I actually do have a post to write about that when I find the time!). 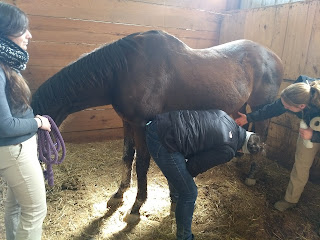 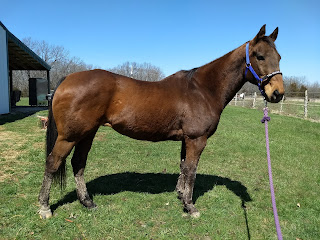 We finished up with Trigger -- this was where we had our only minor hiccup of the day. The senior vet let me know his lungs were a little louder than she'd expect, and asked if I had noticed him coughing. I actually had noticed him coughing occasionally over the last year or so, but never often or regularly enough that I was concerned. She thinks he has a very mild case of heaves, and we talked about some possible management changes. With his level of work, she didn't necessarily recommend anything drastic, but we talked about some small things I can do to increase his comfort levels. I'd like to start soaking his hay and I've checked out a few supplements, and I think he'll definitely perk up once he's on grass again. I think one of the reasons he is having issues now is that we've started cleaning stalls in the morning while the horses are eating breakfast, which does throw up a little dust. There's not a ton we can do to change that right now because of scheduling, but the horses switch to night turnout for summer (and then I'll be cleaning stalls once they're turned out), so that should help. So at least now I'm aware it's a (minor) issue, so I can keep an eye on his comfort levels. He was a bit of a turd about having his teeth cleaned (which is not super unusual), but they got it done, finished his sheath, and we were done for the day! 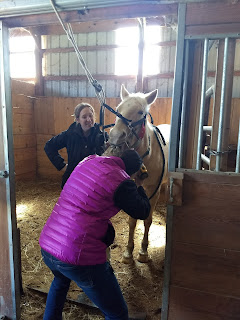 As they packed up and headed out, DH called to let me know that he was almost home. Perfect timing, as we planned to go pick up shavings in the afternoon. We were running SUUUUUPER low, but it wouldn't stop raining long enough for us to go get some! Also, with his new schedule, now he doesn't have a weekday off, which was when he used to pick them up. So scheduling our trips to get shavings now is gonna be a total PITA, but the money we save doing it this way vs. buying bagged shavings makes it worthwhile, so we'll deal I suppose. 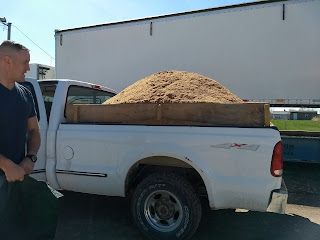 We ran some other errands, got the shavings unloaded, and then gratefully collapsed on the couch to enjoy a low-key evening grilling steaks with my mom. I spent Saturday with some family and friends for Easter, and then Sunday was a low-key day to relax with DH. Did you have a nice Easter weekend? Did you have wacky weather like we did?
Posted by TrainwreckInTeal at 6:00 AM