Whew, the week got away from me! That's okay, it was a bit on the slow side anyway, so I don't feel super behind on blogging. Monday it was still actively raining when I got up, so I let myself take a day off and have a relaxing morning before work. Tuesday it was still pretty soggy -- I made an attempt to ride Cinna, but the arena was too squishy to do anything but walk. I decided to give the Pixio another go, but I almost threw in the towel after another wildly unsuccessful attempt to get it to work. I was pretty grumpy for the start of my ride, but we ended up just walking for almost 20 minutes, which was actually really good for Cinna's brain. Her mind is usually going 1230923473248 miles a minute and she is always trying to figure out what I want next, but about halfway through our ride I could just feel her let out a deep breath and just relax. The second half of the ride was really pleasant -- I need to make a point to do some more just walking arena rides with her :)
Wednesday morning I actually didn't ride either, because DH was getting ready to leave on a work trip, so things were a little manic. So I was determined to ride yesterday! (and spoiler alert, I did).
I had done some more playing with the Pixio Wednesday (not with the horses, just messing with it in general) so I decided to give it one more go before I just chucked the whole thing in a box to ignore. I'm glad I did, because it worked like a dream, and I got some really useful video of the ride. Apparently the secret (for me) is getting the Pixio synced up with the free app, because then I could actually check the battery levels! (since half my problem has been dead batteries or batteries dying mid-ride)
Ruby and I had a nice, laid back ride, where I used not only the Pixio, but also tracked my ride via Equilab and tried out SmartPak's Ride With Me app. I still enjoy Equilab for a general sense of how long I rode and in what gaits, and I was giving Ride With Me a chance as a backup safety app. So basically Thursday's ride was ALL THE TECH haha. Unfortunately I spent most of my time this morning reviewing video and pulling a few GIFs, so I kind of ran out of time (and brainpower) to write. Having this much media is cool, but it's also too much of a good thing sometimes! I barely had time to write before, now that I'm adding in reviewing all this video and trying to pull interesting bits for you to watch, I'm too fried to write... #firstworldmediahoproblems 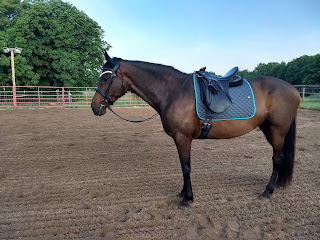 At any rate, I'm looking forward to a long weekend, and soaking up some sun! (and also trying to get rid of this AWFUL poison ivy I've got on my leg, I kind of want to cut my leg off ugh.) Any fun plans for the long weekend?
Posted by TrainwreckInTeal at 6:15 AM