We Missed a Season

So apparently Missouri just isn't doing spring this year? We jumped basically straight from winter into summer, with only a week of nice temps. Which means I'm going directly from complaining about the cold/rain to complaining about the heat/humidity. #sorrynotsorry
But at any rate, I had a shockingly productive weekend! Saturday morning DH and I ran some errands in the morning, including buying some plants for landscaping purposes. The weather was reasonably comfortable up until about 2 pm, so we knocked out some planting and general farm beautification, including planting some bushes in front of the tack shed, mowing, and weedeating. 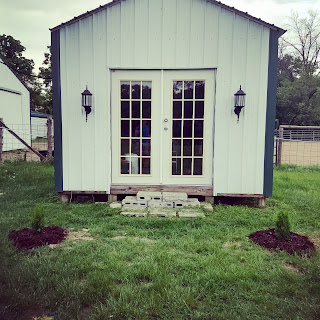 We finished up before it got sweltering, so I grabbed Cinna for a short ride. I ended up not setting up the Pixio because the sky looked vaguely threatening, but it didn't end up raining on us (which I have mixed feelings about because we REALLY need the rain!). Cinna was a superstar for our ride. I noticed in some of the previous Pixio video that my reins were consistently too long, so I focused on keeping them short and keeping my hands forward and following. 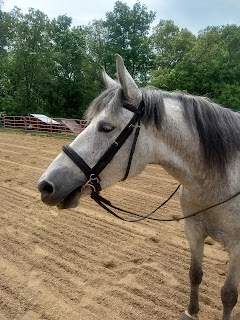 We had some really good moments! Mostly walking, but we did trot and canter a few circles as well. At the walk we did a lot of changes of bend, and practiced stopping off just my seat (which she is a rock star at, so always nice for her to practice something she's good at, haha). It was growing hotter and more humid by the moment, so I ended the ride after 20 minutes of solid good work so I could hose her off. 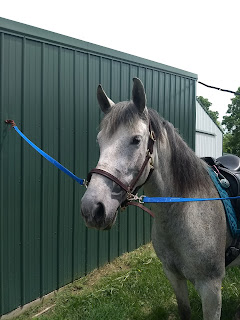 Another part of the reason I kept the ride fairly short is that once I pulled Cinna out of the pasture, Jack started running the fencelines 🙄 Ughhhh. Some of you long-time readers may remember his scary bout of anhidrosis a few summers back. Careful management and supplements have kept it pretty under control since then, but I also worry about him the first hot snap of the year, and obsessively check him for sweat.
On the plus side, he is definitely sweating. On the negative side, he ran himself into such a lather I had to pull him out to hose him off too -- he sweated through his fly mask... Gross! But he clowned around throughout his bath and obviously was having a great time. I need to work on a post about some of his management changes, but that's for another day! Saturday afternoon there was a local fun show I considered hauling Ruby over to, but I ended up staying home hiding in the A/C. No regrets on that front though, haha. 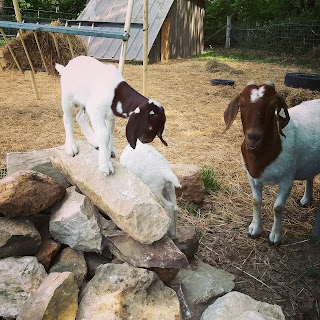 Sunday was another busy day. We started out by kicking the momma and baby goats back outside. They'd been living in a stall all week because momma goat was ambivalent about keeping an eye on her babies and feeding them, so forced interaction helped remind her of her duties, and let them bond a little. After she went back outside, I stripped and rebedded stalls, scrubbed all the stall water buckets, scrubbed and refilled all the outdoor troughs, and cleaned/hung up all the stall fans. We hadn't been stalling the horses last week (since the goat meant we were down a stall), but with the heat wave I knew that had to change. Once everything was set back up, the horses got to come back inside and hang out in front of their fans, which they love 🙂 switching to night turnout is my favorite!
We accomplished so much Sunday morning that I was pretty wiped out, which ended up working out as we had to spend a few hours doing mother's day things with both my and DH's mom. My mom came over for dinner and we had a really good time watching All the Queen's Horses. It's a super interesting documentary about a woman who embezzled 50+ million dollars from a small town in Illinois and funded a lavish livestyle showing Quarter Horses. Definitely recommend watching it, it was fascinating!
Did you have a nice mother's day weekend? Tell me something good! I switch to summer hours this week so I have good intentions (don't I always?) of getting in more consistent riding and blogging groove!
Posted by TrainwreckInTeal at 8:31 AM