Let's see, where did I leave off? Oh yes! Motivated and ready to ride! Brimming with enthusiasm! Maybe making show plans and goals again! You know where this is going, right....? Haha.
And then life happened last week.... ughhhh. Monday, adult-y errands ate up my whole evening. Tuesday and Wednesday I worked in the hayfield (cause ponies gotta eat!). Thursday I woke up hacking my lungs out, and Friday it rained most of the day (and then a family medical emergency kind of kiboshed my planned lesson, which actually probably saved me from having to cancel due to the rain?). To say I was grumpy by Saturday would have been a bit of an understatement, haha.
Despite everything still being a bit soggy, I did sneak in a brief hack on Saturday before heading down to my old barn for a Halloween shindig (roasting marshmellows and watching Hocus Pocus on the side of the barn = epic!). Ruby started off super, we had a brief stop-and-snort at the neighbors sheep, and then a minor reversion in the field to a jigging monster, but as soon as I mentioned it to DH (with annoyance, like "whyyyyy is she being like this again?"), she blew out a breath and flat walked on a loose rein again. 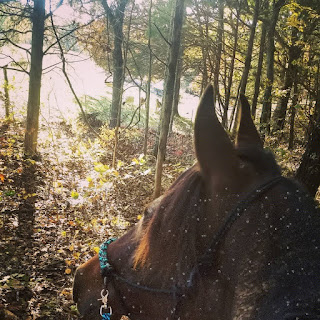 Sunday I was DETERMINED to take advantage of the gorgeous weather, so we road tripped out to our home away from home trail -- Indian Camp Creek. I debated trying another new trail, but after the clusterf*@#$& that was our last new trail adventure, we wanted tried and true. And the fall foliage did NOT disappoint! Everyone else had the same idea - we ran into several other pairs of riders, lots of bikers (some polite, some rude AF), pedestrians with dogs, and at one point when we were splashing around in the creek we watched a group of kids also playing and almost fall in, which was super funny. Ruby was entranced. 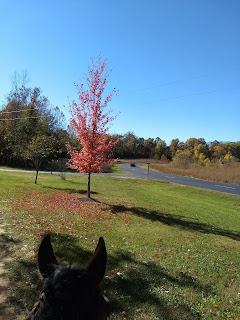 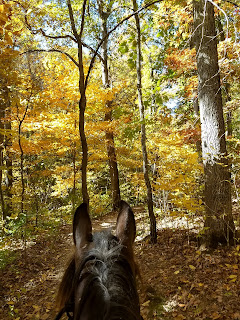 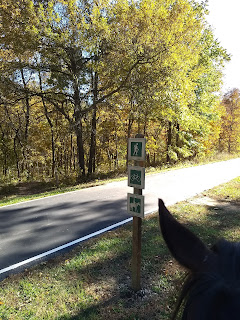 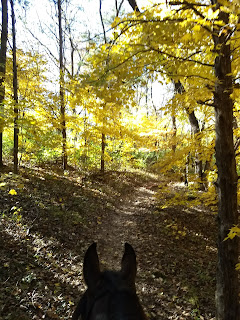 It was exactly the kind of pause, refresh day I needed to relax and feel ready for another long week at work... and bonus -- today is going to be probably our only nice day this week, and I have a lesson this evening! Hopefully all the gross, rainy, cool evenings later this week will mean I have time to write about it ;)
Posted by TrainwreckInTeal at 6:00 AM