Lesson Recap: Pushing from Behind

Monday night ended up being a LOVELY evening, and Ruby and I had another very productive lesson with DT. (side note: having DH and DT is probably confusing... hrm. Maybe I'll ask her if I can use her actual initial. I'll worry about that later). I had just enough time to get home, get changed, head out to the barn and get Ruby ready. I also had time to set up the Pixio, but the base was dead. Of course. Despite being fully charged after the LAST time I unsuccessfully tried to use it. I think T might be on to something when she claims I have some sort of faulty electromagnetic field around me that shorts out electronics...... *rolls eyes* 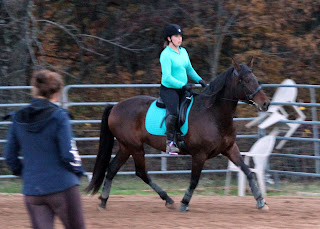 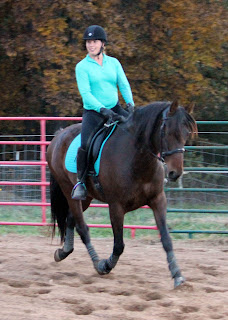 I was mildly apprehensive about the lack of structured riding between lessons (a 2.5 hour trail ride in a sidepull didn't feel like it counted), mostly because I don't want to waste DT's (or mine I guess) time. There's no point in her coming out and having to teach me the exact same lesson every time, I should be working on concepts between rides and making progress on my own. I just really wanted to squeeze in another lesson on the last night day in a gross 10-day forecast. But not to worry! Apparently the daily yoga and hip stretches did help me loosen up a tiny bit, and I made a concerted effort to sit up straighter and received kudos for that.
We started off with some really good exercises to focus on independent body control - finding my seatbones (which was central to the first lesson) and then putting each arm out to the side and following it with my gaze, but not letting my legs and seat change. Once I made a little progress with that, we moved on to rotating it completely behind me and still not letting my legs and seat change. Definitely lots of work to be done there, but it's a good exercise for those days I'm short on time but still want to be productive!
After spending some time working on my position at the walk, we moved on to the trot. The goal of the day was getting Ruby to shift more weight to her hind end - the pre-pre-pre-precursor to collection (you know, like REAL dressage riders do, lol) while I also maintained my new "building blocks". Lots of inside leg to outside rein, serpentines, and rider bobbles, but we were able to string together some nice sections. Especially towards the end, we were able to get 5-10 good strides where Ruby was super in between my aids and rocked back and motoring (as much as a training level horse can, of course! no delusions of grandeur here). 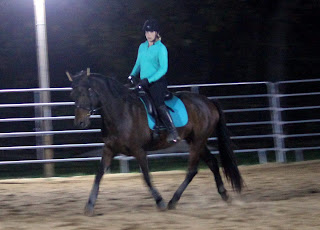 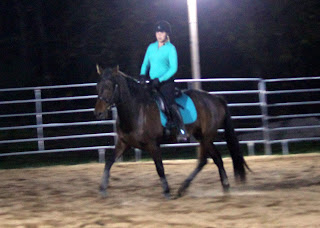 We touched on the canter lightly towards the end of the lesson -- true to form, we had no lead issues while DT was there (so clearly just her watching makes me magically ride better haha). We worked on me keeping my butt firmly in the saddle, and following with my hands (but not TOO much, because then I wasn't actually, you know, able to shape the canter at all). The up transitions felt pretty good for where we are right now, but there's lots of work to be done on the downs. Ruby wants to root really badly and hollow, and I let her get away with that enough times that it's an ugly habit we are going to spend some time working through. During one of the walk breaks, DT and I went over her tendencies to try to use dropping her head down in a fake stretch as an evasion. I had a picture of it, but of course can't find it now, but it's a thing I've let her do and now I get to undo it (horse training is fun ya'lll). 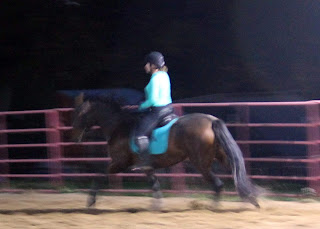 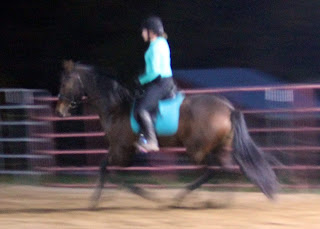 We ended on a good note -- a decent upwards transition and a downward that took me a little while to find but that I didn't let her get hollow through. After a nice bit of walking around, of course Ruby got copious amounts of peppermints and a nice rub down. It was another productive lesson and I smiled like an idiot through a good bit of it. Ruby is so fun when we can make things click like this and I'm enjoying having a bit of motivation again! And it's good we got in a few lessons while it was nice, because the rest of this week has been wet and/or cool and wet, which is basically my least favorite. Hard to stay motivated when my arena is in puddles, ugh. But it's Missouri, if you don't like the weather, wait 10 minutes, so eventually we will dry out again! And the lights mean lessons after DST are still possible - yay!
Posted by TrainwreckInTeal at 5:00 AM