Calling this a DIY might be a little bit of a stretch, but, here we are. It might surprise you to know that back in the day (like 5 years ago HAHA) I used to be a bit of a satin ho. I spent a year point chasing on two horses to win some big ass fancy year-end award ribbons and was marginally successful. Actually the point of all the showing that year was to overcome my crippling show anxiety, but nobody gives you ribbons for that... lol.
In my previous job, I had a boring windowless beige office (which I referred to as the beige coffin), so I strung fishing line from thumbtacks and created an epic ribbon border around most of my office. 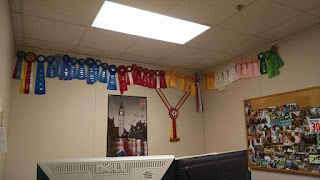 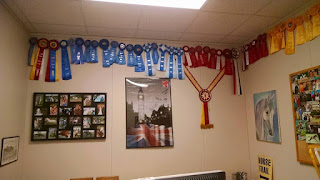 I have no idea where the photos are from the week I moved out, I was definitely mostly done with the 3rd wall at that point. When I boxed them up, I knew I was going to have to figure out a new display at some point -- my new job started in an open office, so work was no longer an option. And even once I got promoted and back into a private office again, I didn't want to drag all those ribbons back in, so they just sat boxed up in the tack shed for a while. I had been idly browsing display options, including vases, shadowboxes, glass-topped coffee tables (that was actually what I was most interested in but it seemed complicated lol), and finally, lattice.
We had to make a run to the hardware store for some ant killer (after a carpenter ant bit Cici on the nose, poor noodle), so I grabbed a 2x8 piece of lattice while we were there, then conned DH into hanging it in the guest bedroom once we got home. Next, I had to iron the ribbons, which were a little worse for the wear after being boxed for 2 years and moved several times. I used my iron on the lowest setting and mostly ironed the backs of the ribbons (so if I scorched it, you wouldn't be able to see it). I also had a pillowcase on hand for some of the more stubborn ones that needed multiple passes. 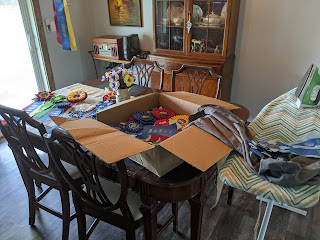 Then it was just a matter of hanging them all up! I got a little OCD and realized there were 7 rows, which was perfect for ribbons from 1-6 with the bottom row for the BIG guys (champions, reserve champion, top 5, my single lonely neck sash, etc). So I started filling it up!
At any rate, for under $20, that's how you can hang boxes of ribbons in a relatively compact space.


Posted by TrainwreckInTeal at 4:00 AM