A few weeks ago, the vet came out for our annual Coggins/rabies/FEC/dental day, and I get some less than great news about the state of the boy's teeth (refresher, for if you forgot), specifically Jack and his EOTRH. I immediately called up to schedule both Jack and Trigger into the vet hospital for the necessary x-rays and extractions, and due to how booked up they were, that appointment wasn't until last Friday.
And because if I didn't have bad luck I wouldn't have any luck at all, the prior Sunday my truck had to go to the mechanic for some basic maintenance that very quickly spiraled into a clusterfuck of epic proportions (as in it's still there and we have no timeline on when it might be done UGH). Thankfully, my neighbor was more than willing to jump in and give us a ride up to the hospital. Due to covid concerns, they aren't allowing clients to accompany horses for procedures. Also I guess they don't usually WANT clients to watch teeth extractions of this nature, so we made a handoff in the parking lot in the pouring rain, and I told my boys to make good choices. My mom recently transferred from the small animal hospital to the equine department, and I was hoping to get some pictures of the process. Trigger had one cracked molar removed, and Jack had all of his top incisors removed. 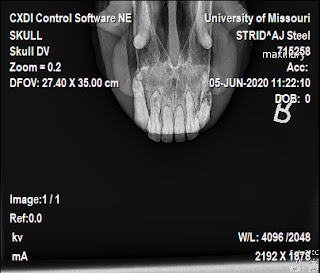 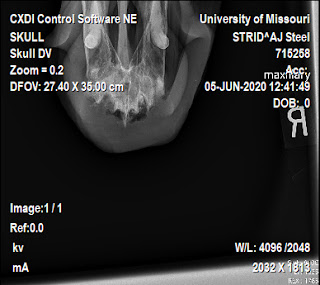 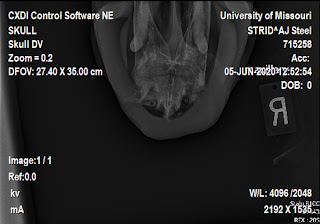 I won't lie, I was kind of a walking bundle of nerves waiting to hear some news about them that morning - neither of them are spring chickens (Trigger is 23 and Jack is 25), but the vet called me at noon to tell me that everything was done and both procedures went well. We were able to pick them up (again, my neighbor is a hero) in the afternoon once the sedation wore off a bit. I got a goodie bag full of teeth and meds and lengthy discharge instructions. Both horses were perky and happy loading in the trailer, and when we got home, Jack immediately dragged me over to the grass to start trying to gum it. He also kept doing this weird licking thing, I imagine his mouth felt pretty different without all of those teeth!
I was under strict instructions to soak their food, rinse Jack's teeth holes daily, and also make sure they got their painkillers (both of them) and antibiotics (just Jack). Of course, despite eating soaked food for the last 5+ years (Jack has been on supplemental beet pulp and alfalfa pellets for ages, and we started Trigger on them this winter when he seemed to be struggling with his weight a little), they've both decided that soaking their (expensive) senior feed is UNACCEPTABLE so I've been scraping a lot of slop back out of their corner feeders and tossing it in the manure pile... assholes. In the beginning I was crushing the pills up and sprinkling them on their feed, but I was worried they weren't getting all of it. Yesterday I just dropped the whole pills into Jack's feed and he ate all but one of them. Today I tried crushing up the pills and dissolving them and attempting to syringe the pills (mixed with a bit of syrup) into him, but I ended up wearing quite a bit of it. So I guess it's back to sprinkling the pills on top and praying.
The vet who pulled the teeth will be out Friday to check him, so we'll talk about it then I'm sure. I'm getting most of the pills into him, I think, and he's certainly happy and perky and appears to be feeling much better. Every morning when I bring him in from the pasture he DIVES into his alfalfa, which is something he's never done before. And he's definitely grazing at night, based on how much grass I flush out of the holes. 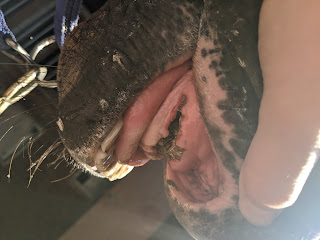 The vet said his bottom incisors will probably need to come out next, but they weren't nearly as bad as the top incisors so we can hold off a bit to make sure he's fully recovered from this round before we worry too much about them. We discussed his weight and my concerns about some of that, and we're hopeful that without those painful teeth, he'll eat more and put some pounds back on (he has free choice third cutting alfalfa in his stall all day but usually only eats a flake or so). Since the extraction he's regularly going through about 3+ flakes now, yay!
Trigger will have a follow up appointment in a month to remove the packing from the molar hole, and they noted he also lost a molar on his own on the other side, so they want to check on that root in about 6 months and make sure it's still not causing any issues.
At any rate, despite the cost and the PITA factor of meds and flushing mouth holes, it was obviously completely worth it to keep my old men healthy and happy! And I got to learn more about a medical condition I've never heard of, so you better believe I'll be watching everyone else's teeth like a hawk from now on.