Yeah sorry I kind of slacked off on this. I ran out of trim board and also a little out of steam after our first big organizational push a few weeks ago, lol. I like to make fun of my husband for starting and then only completing like 85% of a project before moving on to something else, but apparently that's a trait we share! The tack room had been done enough that it was relatively easy for me to get in and out of it for riding (which I've been doing a lot of, yay!), so it got a lot less urgent on my impossibly long to-do list. But then Liz shared an awesome post about her completed tack room earlier this week and it gave me the much-needed kick in the pants to push through this last 15% and get mine DONE (well, closer to done, if not actually done lol).
At any rate, a few weeks ago I picked up some more board, so this week we got back to the next stage of organization. First up, super easy. Helmet hangers. Four screws into the stud, voila. I didn't put them on the teal trim pieces because it seemed like overkill. I actually own more helmets than this, so I'm casually considering picking up a few more hangers down the line, but for now, this will suffice. 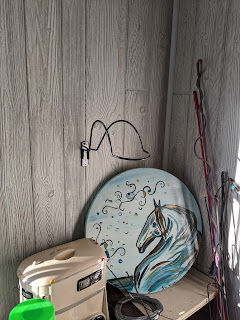 Next came something I'd been putting off that was a smidge more complicated -- building auxiliary saddle racks. I currently own enough racks for all my saddles, but they're all freestanding saddle racks as opposed to wall-mount, and they take up A LOT of space. So much space. Seriously the entire back wall of the shed.
I really love all the saddle racks I have, but it was time to look at a different solution. After looking at a ton of different wall-mount ones, and discussing options with DH, I decided to do a mix of two of my existing freestanding ones (matched pair of two-tier ones on wheels), and then do two wall mount racks over them (to better utilize the vertical space, instead of taking up so much valuable floor space). While I do own eight saddles (which I'm aware some of you consider excessive HA), I really only primarily use four, so my priority was easy access to those four (my two dressage and two western), and then I would use the upper racks that are slightly less accessible for the less-used saddles (my Spanish saddles, hunt saddle, and endurance saddle). Due to *blah blah blah* construction logistics, I can't have ALL eight saddle racks be wall-mounted, but this was a doable compromise. I don't really love most of the wall-mount style racks, because they can have weird pressure points on the bottom of saddles, so I decided to DIY some.
We left them to dry overnight, and then put them up yesterday. The extra board length is to run the entire stud, for stability (screwed into the stud at multiple points). The pool noodles were a good idea in theory, but a bit of a pain in execution. They would probably fit perfectly around the round metal of most saddle racks, but trying to get them to stay curled around the landscape timbers was a bitch lol. We finally stapled them down.
I am so ridiculously excited about these. Even just folding up the single rack and moving it out of the way helped immensely, so I can't imagine how much better the space is going to be once that three-tier rack is also out of the way (already had someone interested in buying it so hopefully it's out of there by this weekend). Now that I have a better idea of what the remaining available wall space looks like, we can start working on the last few pieces -- more girth hooks, whip holder, the last few bridle hooks, a tack cleaning station... and I need to get some sort of storage cabinet or cubby system to neatly organize all my bottles and first aid supplies and all that miscellaneous junk that accumulates in tack rooms :)
Posted by TrainwreckInTeal at 5:30 AM