Part of trying to rebuild all the stamina that covid sapped from me includes tacking up and getting on these hooligans every day I can muster the energy, even if we don't "work". Yesterday was Cinna's turn (well, technically the day before SHOULD have been her turn, but I picked Ruby because I like living lol). That actually worked out perfectly, because yesterday morning I read Megan's really informative post on her Mounted Police clinic and I was able to internalize the information about how horses see in a whole new way -- specifically, her first bullet point:

"Horses eyes not only see two completely different pictures on each side of their head, but that image is processed by the respective half of the brain. A horse's corpus callosum is not as developed as a human's, so the two halves of the brain don't talk to each other very much. That's why you can pass a bucket 8 times to the right but the first time you pass it to the left he's never seen it before and going to die. Because the left eye (and the left side of his brain) hasn't seen it before!"

The ongoing joke with Cinna (usually made to some poor cyclist trying to pass us on a trail) is that she is only scared of two things: things that move, and things that don't move. While as a general rule I'm able to maintain my patience with her as she spooks EVERY RIDE at the same things, usually by the time I change direction I'm ready to be done with her acting like she's never seen the plastic chairs in the corner of the arena (you know the ones that have been there for FOUR FREAKING YEARS). But last night on my ride, I was ready for it, because I knew she HADN'T seen all the things from that eye with that side of her brain yet -- and we were able to move past it much quicker than usual. Definitely some food for thought on how I react to her spooking.

Despite me not having the stamina to do much work, we did trot for a little bit -- she started off in her normal staccato Iberian sewing machine fashion, but quickly settled in and gave me some really nice soft trot circles and figure 8s. I'm impressed all over again at her continued maturity -- particularly about the bitting situation -- she is always the best and softest in her nathe, but since I live to play musical bridles with my fun collection, she's learning that no matter which (dressage legal, very soft) bit is in her mouth, the expectations remain the same. I don't always end up with the same quality of work in the same timeframe, but I'm glad we seem to have outgrown the angry gnashing of teeth or gnawing like a beaver, and she's starting to understand that the expectation every time is to come out and work, regardless of what I put in her mouth. I was also super proud of her that yesterday was a not great day for a spooky horse: serious temperature fluctuations, SO MUCH WIND, the goats playing around, a not-insignificant amount of time off. She had every excuse to come out like a lunatic, but she didn't. People are right when they say 8 is the magic age for Iberian horses, when they finally get their ish together and start being REALLY FUN :) 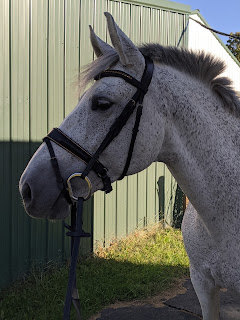 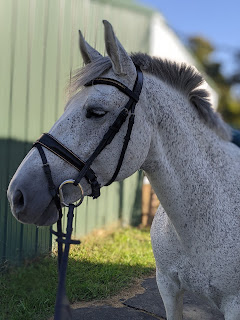 Posted by TrainwreckInTeal at 9:30 AM