Monday ended up being a good trail day too! DH ended up having to go into work Sunday night (let's not talk about I'm still annoyed) and he got home around 4 am -- so he grabbed a few hours of sleep while I did all the chores in the morning, and then in the afternoon we set off to check out a new trail -- Little Lost Creek CA. It was under an hour away, and based on the Mo Trailblazing page, it sounded doable. 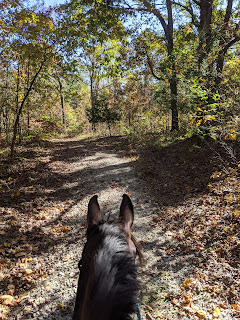 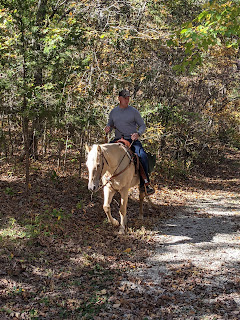 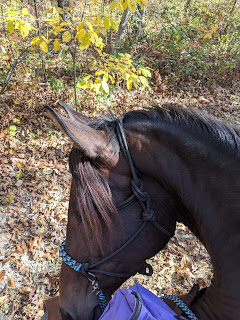 You never know until you try, right? The drive to get there wasn't too hard, although we followed my GPS and not the directions on MoTB. I'm not sure that was a great idea in retrospect, because I think the parking lot the MoTB site was trying to take us to led to some easier trail. At any rate, the parking lot was plenty big for trailers, but there were several tents set up at the trail head billowing in the strong wind, which led to some bug eyes from the horses as we walked past it (the yapping chihuahua and kind of weird campers didn't help). The trail was mostly old logging roads, so it was plenty wide... but there was way more gravel than I expected. And it wasn't the nice all-weather small gravel like at the Katy or at Ruudolf Bennitt, it was like road gravel. And the reason I don't ride my horses much on the gravel roads by my house is they get ouchy on the big gravel. We managed to skirt the edges for a while and keep the horses comfortable, but then the trail went down a pretty significant incline with a huge drop-off on the far side. By this point, DH was starting to grumble. 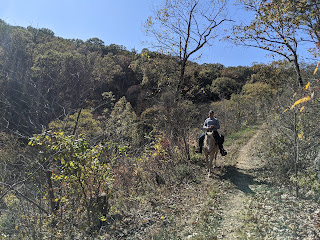 We got to the bottom finally, crossed a (dry) creekbed, and then made it to a wide grassy lane where we stopped to let the horses snack for a moment. Down in the valley the wind had stopped, the sun was shining, and it started feeling like the perfect fall day! 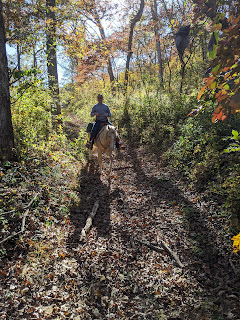 Unfortunately that was pretty much the most enjoyable part of the trail... lol. We came to an even wider dry creek bed (presumably Little Lost Creek?), which I'm sure would be actually lovely to cross during a time we weren't in a borderline drought. I wanted to walk down around the bend where I could see some water, but DH was grumbling about the rocks again so we forged ahead. We came to some trail splits indicating one direction went to another parking lot, so we took the other one that we assumed led to a trail loop. It ended up taking us up some winding less than singletrack (I joked that it was 1/4 track) and up a steep, steep rocky grade. Ruby was pretty game, but DH felt like his weight was too much for Trigger about halfway up so he ended up getting off and hand walking him up the rest of the way. At the top, we had nice trail briefly again before we came upon... logging? There was large machinery and STACKS AND STACKS of logs. And it wasn't thoughtful logging, it was straight up strip logging. That was about the time I thought "huh maybe we wandered off conservation land, because I can't imagine them doing this?" GPS still showed we were in the CA for part of it, but then we definitely left the boundaries and had to backtrack -- I wasn't interested in wandering around on someone's private property! 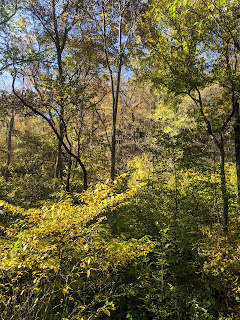 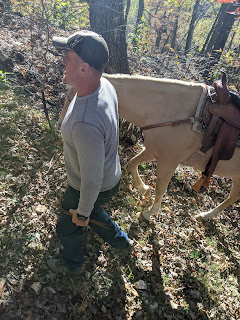 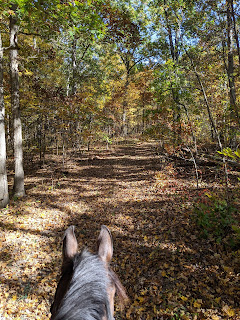 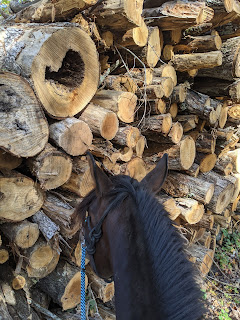 Since what goes up must come down, we got to tackle the singletrack the other way -- DH hand walked part of it out of concern for Trigger (I do think he was being a bit melodramatic about it, the horses were fine), but I rode the whole thing. Ruby was very methodical about where she placed her feet so I let her have her head and stayed out of her way. The angle of the sun meant the fall leaves looked even more glorious this way -- sorry not sorry for the spam! 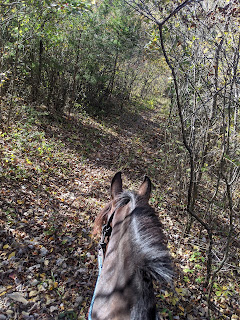 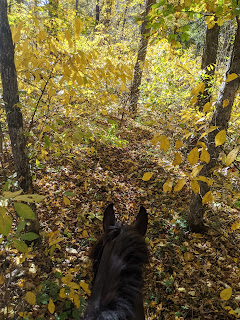 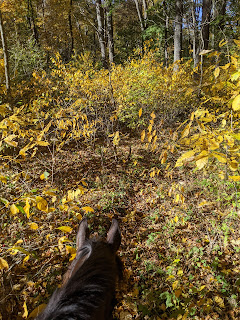 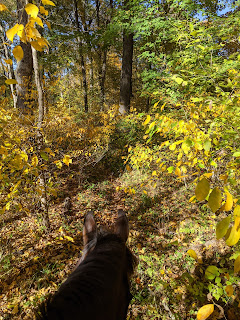 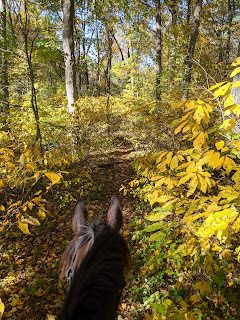 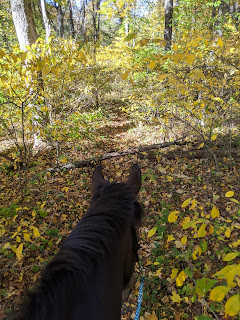 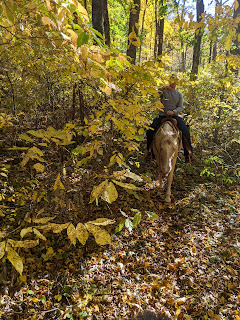 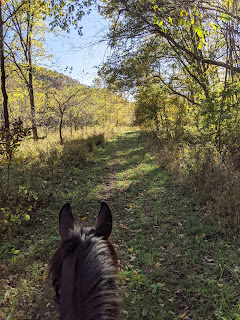 We carefully continued to backtrack, stopping for a while in the grassy lane to let the horses graze for a while and rest before we prepared to head back up the steep ascent to get back to the trailer. 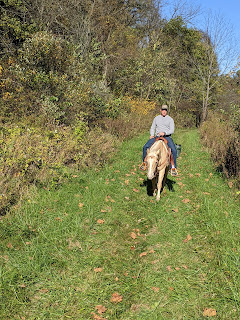 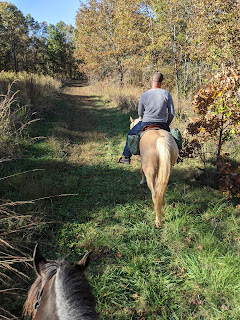 Ultimately, I think I would have felt a lot better about taking the horses on this trail if they were shod or if they had boots (which is on my to do list actually, and just got moved further up). I think the steep climbs and descents were probably a little more than I would want to ask Trigger to do on a regular basis -- particularly if it was at all warm (it was only about 65/70 Monday so they didn't work up much of a sweat). The pro of this trail though was no bikers or pedestrians (I guess you might occasionally run into a hiker, but aside from the weirdos at the trailhead, we didn't see another soul). However, I think I would definitely come back here if the horses had boots, and if I could cajole DH into riding Ruby while I rode Cinna -- they're both young and fit enough that the trail wouldn't be an issue for them if they had good footwear. So not writing this off our list for the future, just probably won't be back right away :) also might try parking at a different trailhead next time!
Posted by TrainwreckInTeal at 6:00 AM