Sunday dawned a perfect, if cool, autumn day. I thought we had arrangements to go trail riding. DH thought he had arrangements with some friends to cut wood with his new log splitter. I grumped around a little in the morning, but figured I'd end up just schooling at home instead of enjoying the beautiful trails. But both the people he made plans with bailed on him, so he hooked the trailer in a snit and declared we were going riding... haha. I wasn't going to look a gift horse in the mouth, so I tossed everything in the trailer and we headed out! 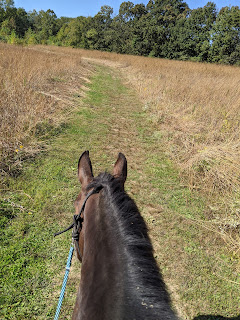 We'd been riding for about half an hour when on one of my "pause and wait for DH and Trigger to catch up" breaks, he called out to me. "Have you been feeding my horse some kind of new supplement? He's being weird... but like a good weird?" I asked him what he meant, so he elaborated. We've had Trigger a long time -- 11+ years at this point. On the trail, he has AWAYS done the following: walked at the speed of a turtle stampeding through peanut butter (unless a return to the trailer is imminent), intentionally scraped your leg into trees or bushes as frequently as possible, and voraciously attempted to grab snacks any time you're not paying 100% attention to steering him. These aren't my favorite behaviors, but he is SO SO bombproof and good for everyone else to ride that I have kind of let those slide (although when I trail ride him I don't let him get away with ANY of that). On this ride, he was doing NONE of those things. He was pleasantly ambling along (still not at Ruby's pace, but with enough forward for DH to comment on it), not obsessively snacking, and not smashing legs into trees.
Interestingly enough, although I hadn't mentioned it to DH, I had started Trigger (and the rest of my horses) on Purina Outlast. Nobody has ulcer symptoms that would lead me to believe it was necessary to scope/treat with actual prescription drugs, but I do think that the way we (general overarching we) keep horses is not as nature intended and can cause them some stress. While I make every effort to keep forage in front of them 24/7 (while also balancing that 3 out of 4 of my horses are complete air ferns) and minimize the concentrates I feed, I still think gastric support is a good thing to do. Previously I had successfully used Ulc-R-Aid as a supplement, but I ran out when we were building the house and since I wasn't riding anyway, I just kind of let it slide. A few bloggers I know are very pleased with Outlast (I thought there were some posts I could link to but of course now I can't find any lol), so the last time I was at TSC I grabbed a bag. That ended up being the last shopping trip before we came down with covid, so the first week or so they weren't getting it regularly, but for the last 10ish days each horse had been getting some top dressed on their daily rations -- I am super bad about remembering to give them a handful before work though. It was super interesting to me that even DH, not the most astute horseman (although he does okay) had noticed enough of a difference to ask me about it. 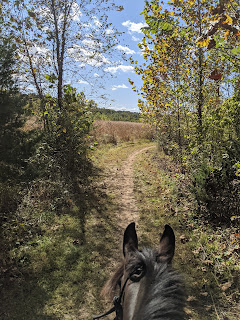 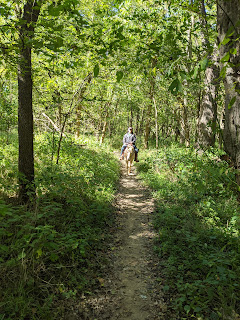 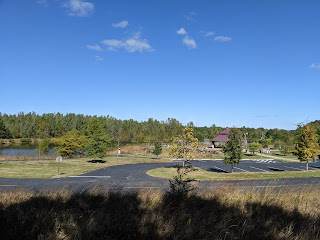 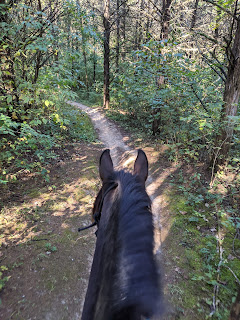 Because of some inexpert navigating on my part, we ended up riding for over three hours -- which was actually fine by me! Since we primarily walked, and took several breaks, the horses were also fine -- they barely broke a sweat! It was a truly lovely day.
Posted by TrainwreckInTeal at 6:00 AM