Last week was the emotional equivalent of being punched in the face, repeatedly. All state workers were given a date to return to working in the physical office - despite months of work being poured into an official remote work policy, and essentially being told that we could continue working remotely permanently, as long as it made sense from a business standpoint (aka, your job could be done remotely, there was no interruption in services, etc.). We have been told this is just a "reset", and they still plan to move forward with remote work options, but I'm not feeling super optimistic about that right now. I have a lot of thoughts about that whole situation, none of which can be currently talked through ad nauseum here, since it's not complicated to connect my blog to my real life... sigh. And regardless of this current speed bump, I *DO* love my job. It's just frustrating to have worked so hard to make this shift to remote, spending tons of money on a remote work set up, figuring out a way to offer even BETTER service and working longer hours than I did in the office, and then basically being told to flip a switch and go back to my 10+ hour a week commute. My dogs will also be horrified, as they've been living their best lives for the last 14 months... I guess the only tiny silver lining to this situation is that we had decided on an addition so that I could have a real dedicated office (instead of working out of our guest bedroom), but the INSANE price of lumber meant we were holding off on getting started -- so at least I didn't start a VERY EXPENSIVE addition to make space for the remote job that I... you know... apparently don't have. Oy vey. Also don't even get me started on the irony of announcing this during Public Service Recognition Week... 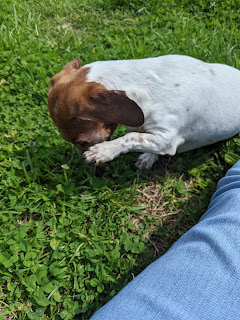 Anyway. Horses. You're probably here for the horses. And shockingly enough, I do have some horse content for last week!

Cinna had a reasonably good ride where she did finally relax and let us get some work done. Then when I had her cross tied to untack she went absolutely beserk, broke the cross ties, and rampaged around the back area in front of the pasture until she had herself so tangled up in the broken cross ties that she literally couldn't move anymore.... so. One step forward, 15 steps back? It was a good reminder to replace those crappy nylon cross-ties, so I'm planning on buying some nice biothane ones from the place I got all my buckle nose halters -- at least they won't get so brittle from the weather! Also a good reminder that I have a telephone post for DH to set so that Cinna can spend some time tied to something she can't break, so that maybe we can move past this stage of tying nicely 95% of the time but then sometimes just setting back and breaking the ties just because she can, which I find SUPER ANNOYING.
Last week we had a 3-day weekend (yay, random state holiday!) so I was able to schedule our annual vet visit on that day, so I didn't have to waste PTO. Spoiler alert -- not nearly as much bad news as last year! :)
Posted by TrainwreckInTeal at 6:00 AM