We enjoyed an unseasonably warm day yesterday (and today, whaddup 70 degrees?), which meant riding! It's been a rough week for me emotionally, one of my dogs is sick and I'm hardcore riding the roller coaster of "she's getting better! No she's on death's door! No wait, better again!"
Tuesday I was so worried about her that I didn't think to ask DH to drag the arena until 9 pm, which he cheerfully did (God bless him). But when I left work last night and it was sunny and 65, I knew I needed to saddle up and spend some time with the horses.
After sorting out the dogs and changing into breeches, I waded out into the muck to catch Ruby. Thankfully she was relatively clean, so we got tacked up and headed over to the arena quickly. Because of the warm weather, the goats were in the paddock adjacent to the arena, and they were also pretty sure it was dinnertime. Which meant they were "talking" to us, which Ruby seemed pretty intrigued by. About the time I swung on, DH showed up (with animal crackers) to play with the goats. It gave us an excellent chance to work on Ruby's ability to focus on me even when there were interesting distractions.

She was really good, even when Cinna and Jack started playing bitey face and zooming around their dry lot (and when the baby goats were actually climbing DH like a jungle gym lol). We did a lot of easy work on figures and lateral work in the walk and trot, and lightly touched on the canter. We're still having trouble picking up that right lead consistently, which is frustrating. She's been a little touchy about having her poll handled this winter so I'm wondering if a chiropractic adjustment might be in order, just to rule out any potential physical discomfort. 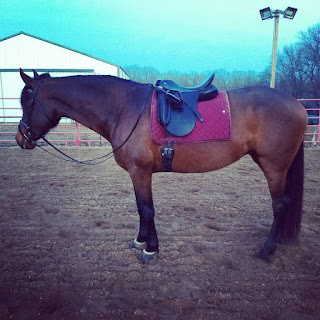 I kept things pretty short with the ride, because I knew we had to move round bales when I finished, but there was actually still daylight when I was done -- spring is coming guys!! DH was too busy playing with goats to take any media (also i looked like a slob so I didn't want photos of me lol) but maybe we'll try again tonight!

Posted by TrainwreckInTeal at 6:26 AM