Hard to contain my excitement to be back with a lesson recap! My trainer's new barn is FUCKING AMAZING, and significantly closer to me (about an hour on the nose with a trailer in tow). Which is perfect, because I am more than ready to resume our regular lessons! I knew this first one would be more about knocking the rust off and acclimating to a new place, and not be terribly productive, but I was still ecstatic to be going. 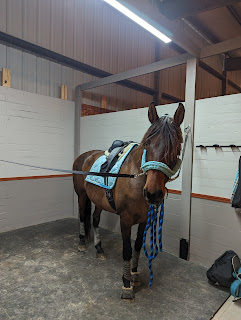 I had low expectations for much actual work being done (particularly since two days before the lesson Ruby spent the majority of our ride dolphining around and cross cantering and making up her own version of gaits), but as always, she surprised me by bringing her A game and being pretty workmanlike! She had some FEELINGS about one of the long sides, which, to be fair, I don't blame her, because there was a significant commotion on that wall with someone in the wash rack on the other side of it, so Ruby could hear but not see what was happening. The canter transitions were not as dramatic as I expected, but she also wasn't really on board with me having any influence over the canter aside from steering, haha. But we did end with some nice serpentines and her really letting me bend and access various parts of her body, and we did get one reasonable transition into the canter each way, so we called it good!

TrainerB asked what my plans were for 2023, so for the moment it's weekly (or as close to weekly as the weather allows) lessons, some schooling shows and more recognized shows (maybe some travel this year, since I now have a functional weekender?), and setting up my Gifted grant week (assuming TDF doesn't mind how long we ended up having to delay it between her moving barns, me breaking my ankle, and then her new facility not being done lol). Let's go 2023!