I did have a fun "tack shed exploration" post drafted, but I have to postpone that for this news flash instead!

I trotted the baby horse tonight!!!! Squee!!!!!
So less than 36 hours after receiving almost 6 inches of rain, the arena was dry enough to ride in. DH raked it twice today, and while there were some wet spots, the whole thing was workable. I'm really pleased with how well the arena is holding up so far! Obviously it's been less than a year, so long-term we may still have issues, but it's looking good to date. 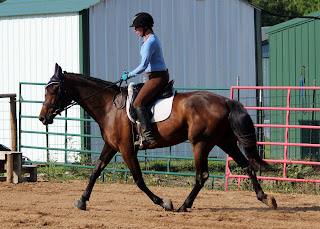 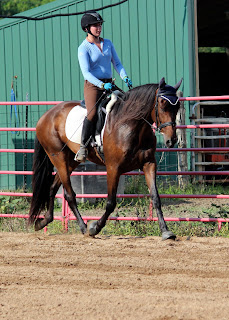 Tuesdays are the designated day I ride with Jacki -- either we trailer up and take a lesson, or we trailer to my place and ride. Always good to get the horses away from "home base" and work in new places. The last few non-lesson Tuesdays have been rainy, or other stuff was going on, so this was the first one we've done in a while. And honestly it was touch and go until I got home from work today and saw how great the arena was looking. Today was already an exciting day because I got my first Kastel sunshirt in the mail, and since the heat index was 100+ today it seemed like the perfect time to break it in. 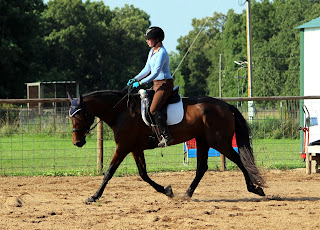 After I got home from work and checked the footing, DH and I headed over to the barn, loaded up the horses and tack (and Jacki), then headed back to the house. The horses have had minimal turnout with all the rain, so they both had some excess energy to burn. Luckily that manifested more in expressive gait changes than actual naughtiness, because both Mort and Ruby are classy like that. And honestly Ruby was pretty lazy. 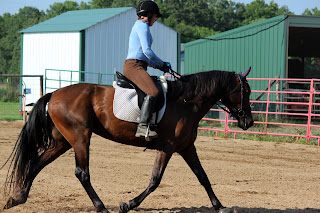 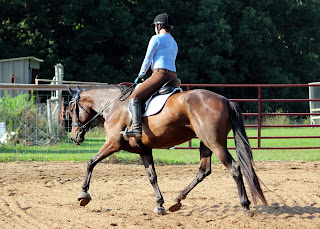 Since she's had a pretty light workload lately, and the sand is deeper than she is used to, I didn't ask for too much. But I was thrilled with some of the canter work she gave me -- in our lessons we've had some struggles with breaking back down to the trot, so tonight I really focused on keeping her in the canter and working to see how much she would let me adjust the canter without breaking gait. 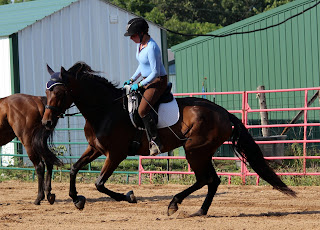 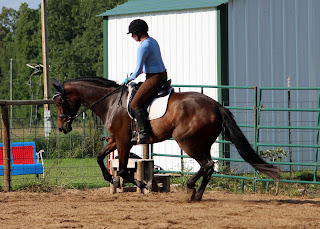 After getting her completely soaked, she got hosed and parked in front of a fan and it was the Cinna-monster's turn. She has only been backed twice, and that was late last fall (like October?). Since then, she's been mostly a pasture puff, but I have worked her a handful of times in the last month. I decided to go for broke and climb on tonight, and she didn't disappoint. DH and Jacki were outside watching, but I mounted unassisted and she walked right off. She also gave me a little trot in both directions. I mostly have photos of the walk, because the trot was all on the side of the arena closest to DH (so not much room for pictures), but I was ecstatic at how she did. Hoping to have some more witnesses for even more work in the near future, and hopefully more photos! 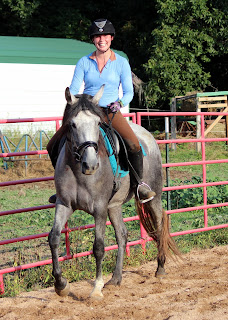 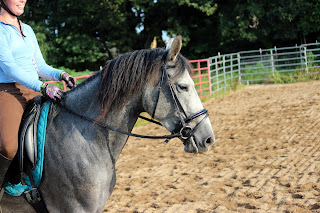 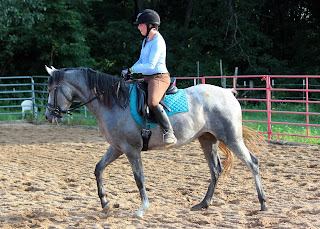 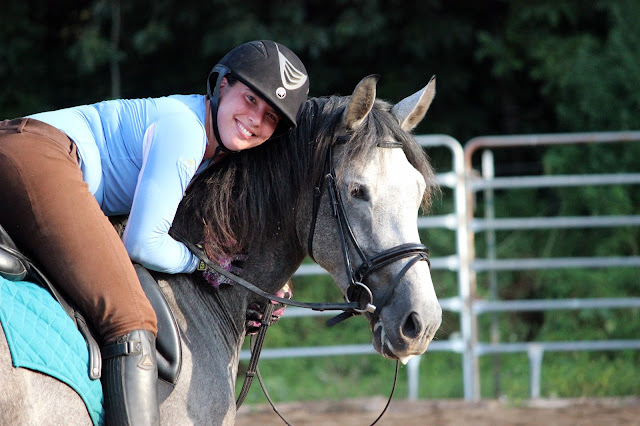 Posted by TrainwreckInTeal at 6:45 AM