**some of these pictures are repeats of pictures from earlier this week, but I love them so I don't care, haha ;) sorry if they bore you!**

Now that it’s cooled back off into the high 80s (perspective is a wonderful thing, haha), I’m trying to get back in groove and ride more. Our Tuesday lesson was canceled due to an emergency, so I decided to work both horses. DH wasn’t home yet so I headed out to ride Ruby first. Tuesday was also a banner mail day and I wanted to test out one of my new sunshirts (more about those in a future post).

I headed over and tacked Ruby fairly quickly, then headed to the indoor. I started with a little in-hand work on our TOtF and she was much better than the last time I tried, so after a few good responses I moved on. She also schooled at the walk and trot in an acceptable fashion (especially considering how little actual work she’s had in the two weeks), but the canter was dismal. I’m starting to think it’s just the size of the arena -- she really struggles to make the tight turns and out of frustration she speeds up. I don’t have nearly the same adjustability as I do out in the open fields, or even in my arena at home (which is both wider and a touch longer).

After accepting that nice canter in the arena was not happening, I decided to hack out so I could at least end on a good note. We did a short loop on the trail, cantering up the big hill and in a few of my other favorite flat grassy places, and then just a nice marching walk through the woods. Despite fly spray, she was being hounded by some bugs so we booked it through the woods pretty quickly to get back into the fields. Apparently I must send out some sort of siren call to the area’s wildlife, because I flushed a flock of wild turkeys (last week it was a deer). Thankfully it was right after I had stopped cantering (I can only imagine what she would have done if I had been cantering past all these turkeys when they exploded out of the brush and flew away), and while she was understandably a little concerned, I was able to halt her so she could watch them for a minute. After that we headed back to the barn -- she barely broke a sweat so I didn’t have to hose her down, which got her back to her hay pile in turnout faster (which she considers a win!). 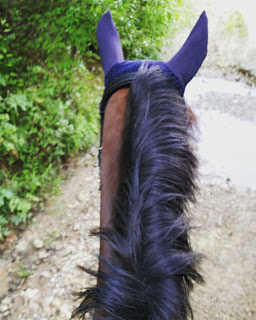 By the time I finished up with Ruby, DH was home and had the arena dragged and waiting for me to work Cinna. I decided since he was around to take media, this warranted unpackaging one of my previously unused High Point saddle pads in pink! Master level matchy matchy ya’ll. Well, not quite perfect, since the pad and the sun shirt weren’t identical shades, but whatever, I was having fun with it. 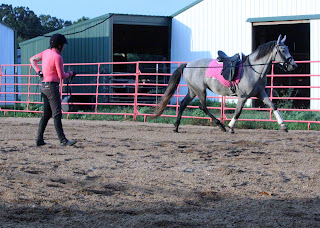 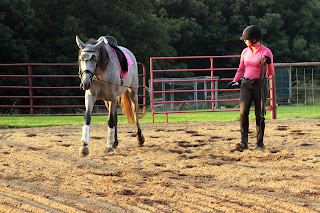 Cinna tacked up like a champ and headed out to the arena. DH settled in a shady corner to take photos -- Cinna already has a problem with that particular corner, so the first few circles were a little dicey until she figured out that he wasn’t going to jump out and get her. On the lunge she was more spooky than she’s been lately, which I found a little frustrating. I love almost every single aspect of her goofy personality, but I do not appreciate spookiness. To be clear, I don’t mind spooking at things that are legitimately new or scary, but when she spooks and blows up over a bench she walks past on a daily basis, I really struggle not to get annoyed (yet another reason I am a terrible baby trainer). I was ready to stop lunging and climb on when for no discernible reason she launched through the air in her biggest spook of the day (leaving giant divots in the arena footing) and took off at a dead run. I asked DH if he saw whatever was bothering her, but he was as baffled as I was. Whatever. Baby horses. 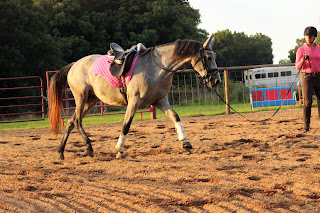 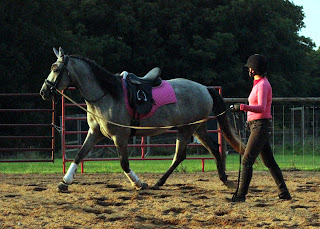 After a few more laps and a slightly more settled demeanor, I headed over to the mounting block.
The last few times she’s stood like a rock for me to mount, but Tuesday it took a few tries. She kept walking off so I had to circle her on the ground several times for her to calm down enough for me to climb on while she stood quietly. She marched right off when I asked (go forward button only gets sticky when she's tired) and the first few laps were... interesting. I’m sure from the ground it looked normal-ish, but my years with Topaz taught me that while bystanders might not be aware, there is a definite “feeling” when you are sitting on a powder keg that is just waiting to be lit. That’s how Cinna started our last ride, and it got better quickly, so I decided to stick it out. She reverted back to being concerned about DH in his corner, so every time we passed him I had him give her a cookie -- he was much less scary three cookies in. 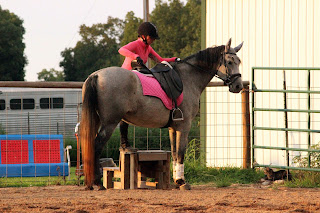 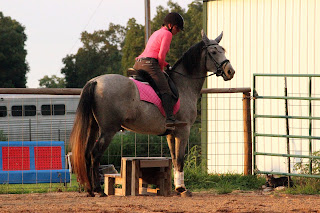 Finally I felt like I had her undivided attention (as undivided as her four year old brain could give me) and she felt less explosive, so we got to work. She is not a fan of working in every part of the arena, so we focused on that, as well as moving off my leg both forward and a little laterally (when she would scoot off the rail I would push her back out with leg, not rein). We were able to get some nice trot moments, including our first few attempts at figure eights, and some tempo regulation with my body (not the reins). Overall I was absolutely thrilled with her effort, and I was grinning like a loon most of the ride. 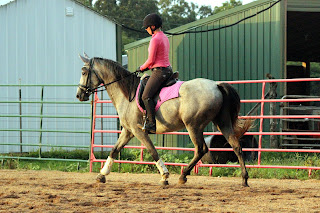 One thing that she still needs a lot of work on is her response to contact with her mouth -- she is fine with a soft, following hand (or my best attempt at one anyway), but if I use the rein at all to back up my requests (usually asking her to halt, and only if she is ignoring my seat and verbal cue), she would violently shake her head. The first few times caught me off guard and she either yanked the reins out of my hand or unbalanced me, but by the end of the ride I was ready for her. We did several walk - halt - walk - halt transitions where I firmly let her know that wasn’t an option -- making sure to use my core to keep her from unbalancing me, and holding the reins with enough pressure that she couldn’t pull them from my grasp, but releasing the pressure as soon as she was halted. Didn’t take long for a lightbulb to come on, so after a final quiet halt, I climbed off! 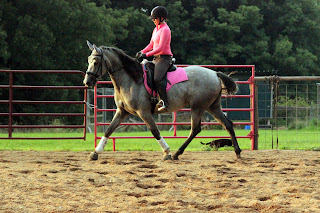 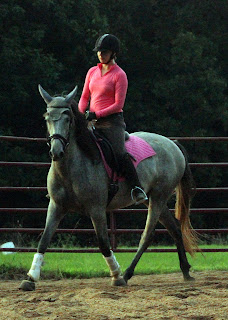 I do have some video as well as the photos (DH is the best), but I’m hesitant to share. SprinklerBandit had a really good blog earlier this week on Riding vs. Training that really resonated with me, because I can identify with a lot of it -- not the part where she took an OTTB and turned him into a super sexy 1st Level horse (because that is badass), but the part where she talks about how riding a greenie will wreck your position, and how she’s glad that she didn’t necessarily start with an ideal position (so she doesn’t have to bemoan losing it). It’s no secret I am not a pretty rider. Lots of that is lack of formal instruction and just winging it. Some of it is functional -- I spent years riding horses where I was forced to be defensive or risk breaking limbs on the regular. I’ve never in my life owned a “trained” horse of any variety (with the exception of Jasper, but I bought him to rescue him, not because I particularly needed a riding horse).

Before I sold her, Topaz was well on her way to being the best horse for me to work on my OWN position on. Ruby is getting there, but now I’m starting from scratch again with Cinna. I’m trying not to beat myself up too much about the feeling like I’m taking one step forward, two steps back as far as my own position goes, and just focusing on the journey. Am I going to get there as quickly as someone who is a better rider than me? Nope. Am I still going to learn, have fun, and train my mares and turn them into decent, solid citizens? Yes. Tres and Topaz taught me I could do this, and helped me refine my methods. Cinna and Ruby will continue teaching me things about both riding and training. And someday I’ll be able to watch video of myself without cringing. Someday. Not today. But someday.

However... because I need to get over this hang up of obsessing how badly I ride, I AM going to share some video clips. This was towards the end of the ride -- two feature a little bit of canter. Please excuse the tail swishing, I forgot to fly spray and she was a little annoyed by the flies. Also please excuse all of my deficiencies, but enjoy my baby horse just figuring out this whole work thing.
Some fairly generic trot.
In which we forget how to steer to the right.
Better steering to the right.
I shared these privately with a friend earlier this week (after apologizing profusely and making excuses for some of the more glaring faults), and I wanted to record her responses back to me just so I can read them whenever I’m frustrated. I have great friends :)

That was a fantastic canter! Great support by her trainer too! (I responded that I looked like a drunken monkey) Nah. Too hard on yourself. Supportive leg, driving seat, balanced keeping her upright, hands out of her way, guiding reins.... You're doing a great job! It does always feel like crap on babies, but your doing exactly what you should be. I've seen way too many "trainers" fuck up with babies. BTW. I'm more than a little jealous of your elbows. Mine don't think they need to move. Wow, the pictures show it even better. You're staying basically the same & letting her silly baby antics happen. You're guiding, supporting, but not overreacting or forcing her. 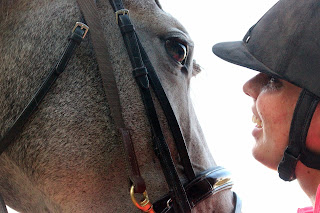 Hanna, thanks for always being there for my training mishaps and offering support on those days where I feel completely useless. I can't wait to hit the trails with you soon!