Can I Ride Your Horse?

After nearly 3 straight days of rain last weekend and isolated storms almost every day this week (and the accompanying humidity), so not much interesting going on with the riding side of things. Ruby had yesterday off and a light lunge tonight. On the plus side, that’s given me some time to search out new equestrian blogs to follow, and keep working on my list of topics I want to write about eventually -- “eventually” being a nebulous term that could mean tomorrow or could mean in two years, if I manage to stick with this. I have a notebook I'm jotting ideas in so when I have no riding/training content, at least I'll have fallback topics! 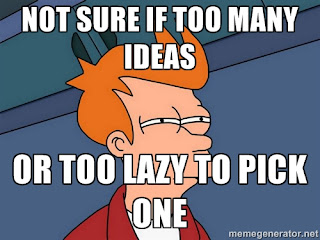 I’m kind of excited to have successfully passed the two month mark, with close to 4K views, which is way more than I managed last time I started (and then quit) blogging. So far I’m mostly recapping my mundane life, and not asking enough questions! So I’m going to try to be better about writing posts with more questions, because I honestly am curious to learn all about how my horsey life differs from the horsey lives of a lot of the bloggers I follow (or the horsey lives of my friends!). 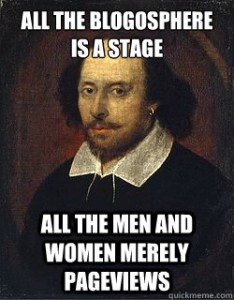 So here’s a fun topic that was suggested to me and the more I thought about it the more I realized that this is probably a widespread problem -- what do you say when non-horsey friends, acquaintances, or even total strangers ask if they can ride your horse? 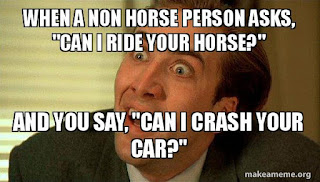 I’m not talking about a barn buddy asking to swap rides just to see how each other’s horses feel, or even someone you know who rides, I’m talking about those people who you KNOW are not horse people who think that just because you have horses you are running some sort of pony ride service?
For a long time it was easy for me to duck out on this question, because I had very “hot” (and usually also green) horses, so I would just say “Oh I don’t have anything suitable for beginners” or “I’m the only one who can ride her/him, s/he’s not very trained”.
But now that DH’s horse Trigger is home again, that’s not really the case, as he is the definition of a packer. And obviously it depends on my relationship with the person -- if it’s a total stranger the answer is a blanket “No”, no further explanation necessary (No is a complete sentence!). But sometimes it gets trickier if it’s someone I have more than a passing acquaintance with.
Sometimes I will saddle up Trigger and do the pony ride thing (especially since we have an arena now, which makes me happier than just leading people around in the grass). Sometimes I duck out by using the insurance excuse -- it’s a liability, and my insurance doesn’t cover that. HorseNation had an article with excuses ranging from useful to just plain funny (number 7 was my personal favorite!).
But then on the flip side, I feel guilty. I didn’t have horses growing up, so if it wasn’t for the charity of horse-owning friends, I wouldn’t ever have gotten to ride. Sometimes this makes me feel like I should “pay it forward” so to speak, and help keep enabling the next generation of horse crazy kids who will hopefully fall in love with the equestrian experience like I have.
What do you tell people if they ask to ride your horse? Do you have a blanket response, or do you go on a case-by-case basis? 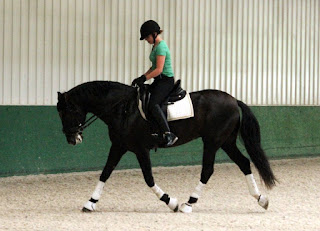