Sooooo super quick update from the weekend! Friday was a wash -- needed to catch up on house stuff.
Saturday morning DH and I decided to rinse and clip up Cinna and Trigger, just in case we made the show on Sunday. I also took the opportunity to fit my Spanish presentation halter to Cinna's head, and practice a little in hand with her. We've been working on the idea that I can run next to her and that isn't a signal to race off at the canter bucking.... haha. She stood like a rock to have her bridle path clipped, for only the second time in her life -- and the first time she was heavily drugged post-float! She wasn't as thrilled about lightly clipping her whiskers on her face, but since she isn't really a "show horse" I didn't push it. I also ran the clippers down her legs, just to get her used to them. She was a little bit of a shit in hand, but DH walked her down to the pond and back and she settled in. The sky was a little ominous looking, so the pictures turned out fun, even if they were only cell phone shots. 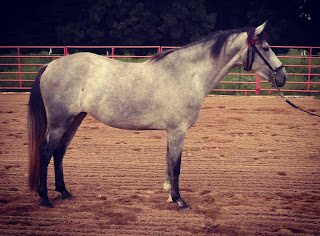 Sunday was a jam packed day. Up early to move some hay for my mom, then we sped back to pick up Cinna and Trigger to head to the horse show. She loaded without any fuss, so I was hoping that would be a good omen for the rest of the day. She unloaded okay, and was reasonable for the first half hour -- I walked her around, let her check out the arena, other horses, graze a little, etc. I thought having Trigger there would be a calming influence on her, but instead they just mostly screamed back and forth to each other -- mental note, next time, take her alone. 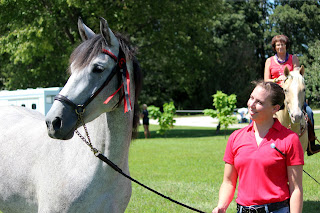 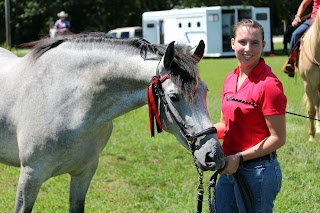 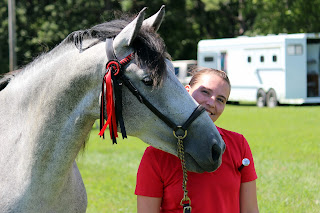 As long as she was moving or grazing, she was pretty good. The trouble came when I asked her to just stand still and wait -- that's something that we haven't practiced nearly enough, and it showed today. In our halter class, she walked and trotted fine with me, but line up was an absolute disaster. She was 100% checked out and not going to stand still. Mostly it was just baby impatience and lack of training on my part, but she was also getting bitten up pretty good by greenhead flies (who are apparently impervious to any and all fly sprays, great). The other two horses in our class were Arabians (it was a non-stock type halter class). One is an older show horse with bagillions of shows under his belt, and the other was a 10 year old stallion owned by a friend of mine -- while not an experienced show horse, he still had a lot more life experience and shows under his belt than Cinna. I didn't feel ashamed at all to get our butts kicked by them, since she was a tasmanian devil of activity, making it very difficult for the judge to get a look at her! 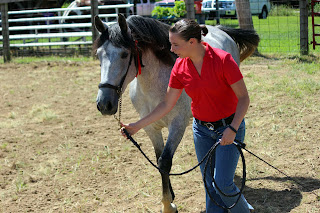 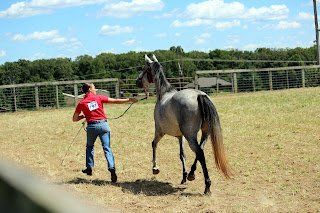 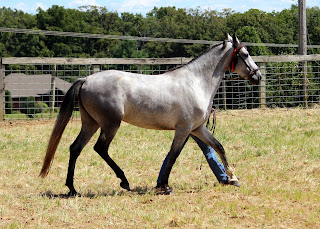 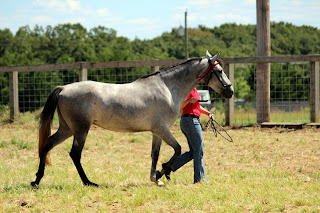 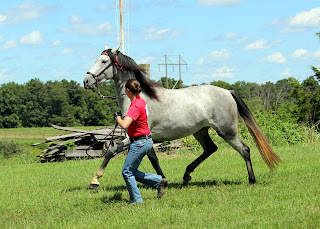 I didn't bother picking up her 3rd place ribbon, but she did spend another half hour tied up to the trailer sharing a hay bag with Trigger. After determining that was probably enough life experience for one day, we loaded up and took them home. 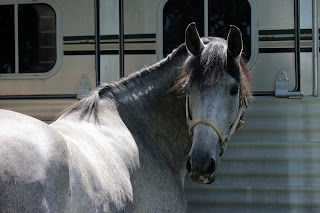 (the formatting for the above photo won't cooperate AT ALL, so my OCD is just going to have to deal that it's left aligned instead of centered)
Wins for the day -- she loaded twice without any fuss, stood tied to the trailer, and tried really hard to listen to me in the halter class. She also did relax enough to graze, so yay!

Verdict -- she needs more miles! Hopefully I can get her out to a few more fun shows, and then perhaps a dressage show this fall (or more realistically, maybe next spring haha). 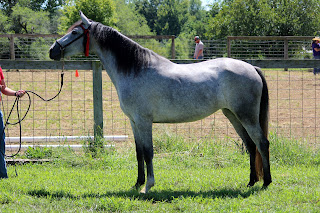 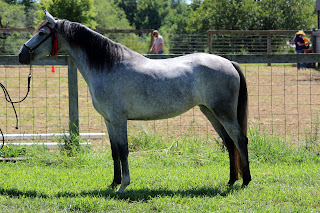 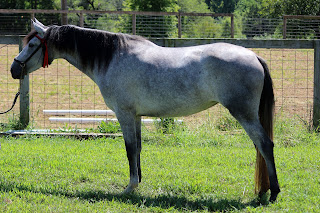