I wish that saying this week had been manic was unusual, but honestly my life is pretty manic on a regular basis -- I guess I should just get used to it?
Monday and Tuesday nights were both a wash as far as horse things (which I kind of mentioned in my brief Wednesday post). Wednesday night I did manage to sneak out to the barn to give Ruby a brief lunge. It was humid and miserable, and she was fairly unhappy. Don't get me wrong, still fairly obedient, but pretty irritated in general. I did learn a fun thing -- apparently the secret to trot lengthenings is a horsefly on her butt ;) haha. I'm not saying it was a particularly nice trot lengthening, but hey, beggars can't be choosers! 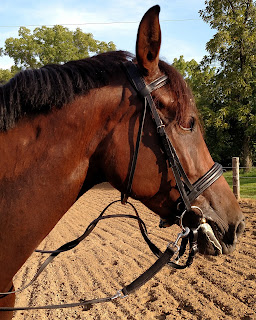 Thursday was similarly muggy, but I needed to work the baby horse. I didn't want to use the arena, because rain was in the forecast (DH likes to drag the arena before rain, and since he is in charge of arena maintenance, I try not argue with him -- his way is working so far, so until it stops, he can be the boss). I was uncertain of my ability to A. start the antique Ford 8N he uses to drag the arena and B. my ability to not hit the fence with the rake while dragging, so I opted for working outside of the arena.
As the Sunday show highlighted, Cinna is very herd-bound. Honestly there isn't really a good way to prevent this considering I have three horses at the house and they live together. So I decided she just needs to work on being separated from the boys for increasing amounts of time. Wednesday and Thursday night I left her in the stall after dinner for several hours while they went to turnout (we're on a night turnout/daylight stalled schedule right now). Wednesday she was very agitated about this, but by Thursday she was more chill.
Thursday was also a big night in baby horse world as we decided to explore more of our property, including the trail. First we walked back to the fence of the back pasture -- this walk was immediately interrupted by a flight of turkeys, and after a fairly spectacular baby temper tantrum, I added a stud chain to our tack. I looped it through the noseband so it wasn't quite as harsh, and carried on -- I had her normal lead rope in my left hand, and the stud chain lead in my right, which allowed me to lead her like normal as long as she was behaving, but apply correction if she was naughty. After the first few corrections, she was markedly better. I really don't particularly care for using the stud chain on a regular basis, but she knows exactly how big she is and how to appropriately use her weight to make my life difficult. This is the part that sucks about training very smart horses! And of course, most of this stems from my lack of working with her as a foal/weanling/young horse, so 100% my fault, and I'm the one who needs to deal with her shenanigans. Even if that means being the tether for 1000+ lbs of baby horse kite.
After adding the stud chain to the mix, she walked nicely out to the back fence, and we hung out grazing for a bit. Then we meandered back to the barn, and I decided we would try to loop through the other section of the trail. We own an abandoned church in a separate fenced lot adjacent to our property, and there are a few ways to get there. One is a grassy lane between our front paddock (5 strand electric fence) and the front property line (3 strands of barbed wire). I didn't really want to deal with a possible meltdown in that small of a space (at it's narrowest it is about 5 feet, but mostly it's about 10 feet), so I opted to walked down to the road. Our gravel road is fairly well traveled, but I only had to make it like 150 feet -- I timed it pretty well, but of course when I was about 10 feet from where I planned to cross, a car came around the corner behind me. I was able to get her across the small ditch without any issues, and she was more obsessed with glaring at the church than the car -- I honestly don't think she noticed it at all. So, progress? The neighbor on the other side of the church has goats and cows (and possibly some sheep?) but thankfully none of them were in the field next to us. We made it unscathed back to the beginning of our woods trail, and made it about 100 feet in before I decided to stop her and end on a good note. We headed back to the barn, had a nice hose off, and then she hung out in her stall for an hour or two after I turned the boys out.
Pending the weather forecast this weekend (they're calling for more rain, of course), there are more fun shows I'd like to get her out to for some more halter practice (or maybe just trailer-tying, hanging out practice!). At this point I don't trust her to tie to the trailer unattended, so the only way she can come with me to some dressage shows this fall will be if I have a friend accompany me whose sole job is to babysit her -- any takers? Didn't think so.... lol. Oh well. Hopefully the weather will be nice enough for me to get out to the shows and get some more fun media (because all these cell phone shots suck), and hopefully I can also squeeze in another ride on Ruby tonight!