Well after yesterday's advice, I think I have the situation sorted out. The seller finally responded to me and I should get a tracking number today (if I don't get it by the end of the day, PayPal claim will be filed).
After the riding plans for the beginning of my week were disrupted due to my local GMO meeting and then finalizing DH's car purchase, I was thrilled to get back in the saddle Wednesday evening and last night. Wednesday, I took a long conditioning hack with one of the other boarders at the barn. There are several good hills and open fields on our trails, so we took advantage of those and did lots of trotting and some canter work -- we even circled around to do the biggest hill four or five times! Ruby was fresh but very obedient. I don't think I've really been on the trails since some of our really big rainstorms (or at least only a few of the loops, not all of them), and one of the creek crossing was substantially changed, which Ruby was unhappy about. It had a very deep spot, and a very inconvenient tree stump protruding into the only good way across. We made it over, but it wasn't pretty. I'm planning on taking that loop again in the future and trying to drag some of the stuff out of the way. I use the trails more than most of the other boarders, so I always try to make sure I keep them nice when I can! 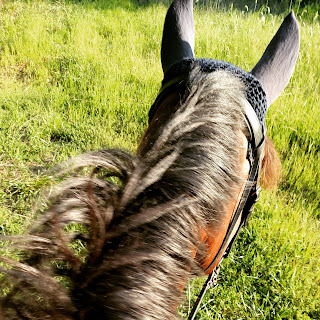 Last night I decided to split my ride into arena time and trail time (the trail is my reward for actually schooling, haha). Jacki was letting Mort dry off after their ride and subsequent bath, so she offered to come watch me ride and give me pointers! (something I always find helpful). After taking her suggestion to really work on varying my walk warm-up with lots of changes of directions, circles, and serpentines, Ruby and I were able to pick up a much nicer trot than we usually begin with -- and it got steadily better throughout the ride (better being subjective of course, but she felt better to me). I was having some trouble maintaining a steady tempo, so Jacki had me send her forward and bring her back, adjusting the speed of her trot with my seat, which was very helpful in eventually getting her to listen and maintain a good tempo. I did notice that while she is getting much better about maintaining correct (or more correct, for us) bend to the right, now I seem to have broken the left -- isn't that always how it goes? 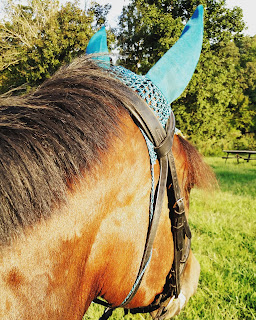 After finding a happy stopping point, we headed out to the trail. I wanted to work on our walk-canter departs on the hill, focusing on making sure she picked up the correct lead. That might not sound complicated, but riding so much in small arenas makes it very easy to depend on the wall/small circles to help pick up the correct lead. She managed three out of the four times I asked, and the one incorrect was to the right, which is her sticky lead anyway, so I was pleased with that! The horseflies were out in full force, so we didn't stay out too long, but I really had a good time. The weather looks to be staying in the 70s and 80s for a bit, so hopefully I will be able to get in some good rides and decide what (if anything) we'll be showing at the fall schooling show!
Cinna bonked her nose during last week's trailer session and so I've been giving her a little time off, didn't want to irritate it with a cavesson. Hopefully she'll get worked some this weekend!
Posted by TrainwreckInTeal at 5:00 AM