Today’s entry is mostly going to be about baby training and baby training annoys me, so potentially annoying post ahead? Haha. It's all I have to write about, so sorry ya'll. Last week Wednesday and Thursday were grossly hot and humid, so I skipped the barn. Friday I went over and just played tag with Ruby in the indoor to let her stretch her legs -- she really gets a kick out of that, and will hunker down like a cow horse trying to “cut” me, wheel and race away. She’s so agile!
Saturday morning was consumed with car-shopping for DH and evening was mostly full of chores, but I did pull the trailer out to give Cinna some practice tying. I want to start taking her to some fun shows (before I mess with dressage shows) and give her some experience just hanging out tied to the trailer, because patience isn’t really her thing (like owner like horse, right?). Saturday after dinner I tied her and Trigger to the trailer, assuming that he would be a good influence on her. I thought wrong, he was kind of a dick. But despite that she had a good session, mostly just hanging out and eating hay. She pawed a few times, but immediately stopped when I yelled at her (I was sitting under the lean-to supervising). 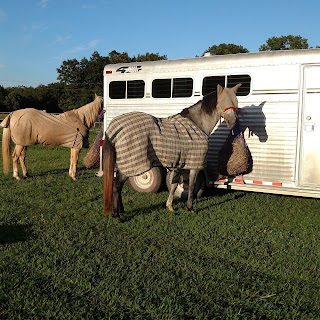 Because I don’t know how to quit when I’m ahead, I decided we should practice loading too. I incorrectly assumed that loading Trigger first would help, because with most horses, having another horse on the trailer is a comforting thing. I threw him on, then walked her around to the back of the trailer. No dice. Baby explosion. Total and utter meltdown. After fighting with her for close to 20 minutes while poor Trigger stood on the trailer, bored out of his mind, I finally gave up and tied her back to the trailer so I could unload Trigger and turn him out. Of course this fried her brain even more, and in the less than 2 minutes I left her alone she broke free and then took off around the property. The things I was muttering under my breath don’t bear repeating in polite company, but I finally caught her and cross-tied her in the barn in front of a fan to cool out (because of course by the time I caught her she’d worked up a sweat).
Giving her time to cool down also gave me some time to cool down mentally (also physically because chasing her around the property almost gave me a heart attack, but I digress) and I knew we couldn’t end on her temper tantrum and then subsequent escape from tying. So once we were both slightly more calm, I tried again. Before I even got near the trailer, I walked into some open space and worked on a technique I learned when I got Tres and Topaz -- Cindy, who I bought them from, was a big follower of Linda Tellington-Jones, and when we were loading the girls up in Ohio, she explained this method to me. (Disclaimer -- any mistakes in explaining this concept are obviously mine). Basically you use a dressage whip and teach the horse that lightly tapping a particular leg means moving it forward. So standing at her shoulder I could tap any of her legs and she would move that particular leg forward. So I worked on it from both sides getting her to move her front and rear legs as I tapped each one individually. While it initially took a tap or two for her to understand what I wanted, less than 10 minutes later she had it down pat so a single tap resulted in moving the leg I wanted.
We moved back over to the trailer and tried, and she got agitated again. I feel like the tapping the leg method would work better with two people, as what kept happening was that when I stepped a half step back to reach her hind legs, I had to move enough to her an opening to escape left around me instead of going into the trailer (probably not explaining this well). If I had someone keeping her lined up and straight to the trailer and a second person to tap, I feel like it would have been more successful, so perhaps I can try again with DH sometime. I didn’t get stressed out about it, just put the whip away and grabbed some cookies instead. Her halter currently has a pretty long lead rope on the end, so I just let her chill at the end of the trailer and climbed in and leaned against the far wall and waited her out -- it’s definitely what I should have done the FIRST time I tried to load her, instead of giving her what she wanted (a fight), but hindsight is always 20-20 and it’s been a long time since I actually had to work this hard to load any of my horses. Of course, after about five minutes she climbed on, so then we worked on backing out quietly, re-loading, tying in the trailer, moving the divider, etc. She climbed on and off quietly about five times, so I called it a successful day and quit.
It was a good reminder to me about how spoiled I’ve gotten with all the older horses. Every single one of my horses came to me as difficult loaders -- whether it was just lack of practice (Tres and Topaz) or some sort of traumatic event (Jack, Jasper), or just getting away with being a jerk for a long time (Trigger, haha), I had to work very hard with each of them to teach them that loading wasn’t a big deal. It’s easy for me to get impatient with Cinna and forget that she doesn’t have much experience on the trailer -- which is 100% my fault. So getting her out to some low-key fun shows should give me a chance to work on trailer loading in a less structured way, which will be good for both of us mentally.
Last night was my GMO meeting, so no horse time, but this week is supposed to stay in the 80s, so hopefully I can squeeze in some riding! I did manage a brief ride Sunday evening, sans stirrups, but no media. I also think we're going to finalize DH's car purchase tonight or later this week, so that's been taking up an inordinate amount of time -- adulting isn't my favorite thing, so really hoping we get that wrapped up so I can move on with my life!