Monday blogging is probably always just going to be a wash -- unless we have a monsoon on Sunday or something... haha. 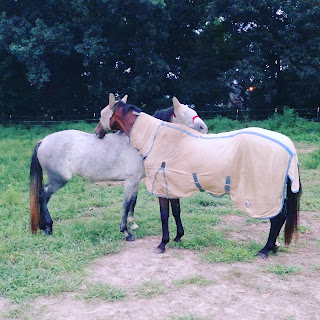 Friday the tack auction was a bit of a bust -- for me anyway! A few friends from the barn went. One scored a really awesome Schneider's sleezy and a brand new Air Ride Orthopedic pad. The only thing I was really tempted to bid on was a brand new full set of blue plaid shipping boots -- but I managed to resist. I already own several sets of serviceable shipping boots, although these were much more fun. It was still a good time -- we all hung out, talked, laughed at some of the local wildlife, the works. 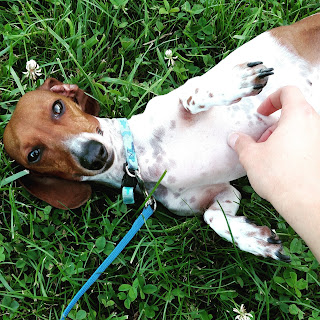 Saturday was blessedly cool and lovely but I was a bum (one of the dachshunds is under the weather so I was coddling her). Sunday was the same -- and by cool I mean 80, haha. The incessant rain has led to ridiculous amounts of mowing, but Sunday I revolted and demanded that DH take me trail riding. We loaded up the trailer (picking up another friend of mine) and headed out for 6.5 miles on the trail. Even though I decided to ride in my western saddle (which pretty much negated the use of half halts.... oops) Ruby was still really good. We worked some leg yields back and forth across the trail, and also worked a little trot/canter. As always, seeing people, dogs, bikes, boats, bridges, and more, was great for everyone's brains. I also really love the rhythmic clip clop on the gravel that you don't really get in the arena! 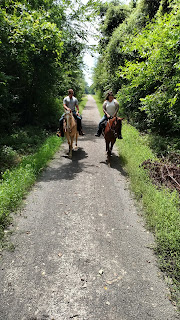 Monday we drew some blood from Ruby for some tests -- her weird udder thing is still going on and a vet has suggested the possibility of a metabolic condition. I'll write more about that when I know more, but I decided to give her the evening off since it took my mom like 8 attempts to hit a vein. Ruby was a saint!
Giving Ruby the evening off gave me more time to devote to the Cinna-monster! She had last week off because of the weather, and it was still cool Monday night (low 80s, cool is relative, haha). DH worked Trigger while I was riding, which was a new experience for Cinna. She didn't seem to mind having another horse in the arena, and she still kept about 90% of her attention on me, so yay! And having him there made the "scary" parts of the arena less scary -- with Trigger giving her a lead, she happily worked in pretty much every section of the arena. Since DH was riding, I don't have "good" media (aka pics from my DSLR), but he did snap some cell phone shots and a quick video! 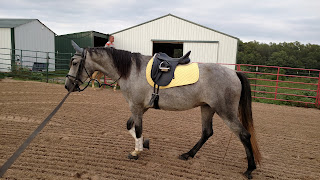 We also got very brave and took a spin around the field -- I really want to start taking her on our trail but sounds still make her very jumpy (I almost took a swim when some frogs jumped into the pond as we strolled by), so she needs to be a little quieter about that before I venture into the very noisy woods. After brave baby adventures, I gave her a nice long hose off. She is about four years overdue for a good spa day -- hopefully soon I can tackle her rats nest of a mane with some conditioner, and maybe start braiding it so it all lays on the same side (she got her mom's mane, lol). 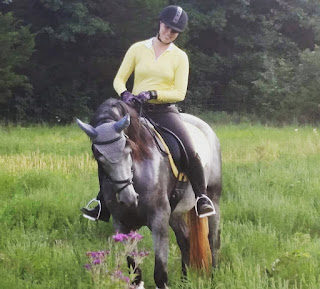 The nice cool weather is supposed to hang around for a bit, so hopefully I will get lots of riding done this week and actually have things to post!
Posted by TrainwreckInTeal at 5:00 AM