As always, when I'm lacking content (between both the cold weather and the plague I'm suffering from, absolutely NO barn time is going on), L. Williams saves the day with her 10 questions!

Does your horse need shoes?
At the current moment with their levels of work, none of my horses need shoes. That might change in the future, I don’t know.

What do you think of the barefoot vs shoes debate?
I think it’s dumb. Some horses do fine barefoot. Some don’t. That doesn’t make anybody right or wrong, it just makes each horse individual. If your horse need shoes, use them. If your horse doesn’t, don’t. It’s not rocket science. There are so many variables (genetics, environment, level of work, etc) that one blanket method isn't going to work for everyone.

Favorite season for riding?
I really love spring! Winter makes me miserable, so as soon as it starts warming up I get so energized to ride! I don’t necessarily like the mud that frequently accompanies it, but still.

How many shows do you think you’ve gone to?
I really have no idea. I could probably work out how many dressage shows I’ve competed in if I counted backwards using all my ribbons, but then before that there was a hunter show, and tons of fun shows. And that’s just ones I’ve competed in, I’ve attended WAY more as a spectator. The mind boggles….

Do you consider yourself a good rider?
Not particularly. In terms of equitation, absolutely not. In terms of being able to stick with a horse while they’re doing something stupid, then yes, on a good day I’m okay-ish. But I’m not certainly not going to be short listed for the Olympics… ever… haha.

How experienced do you think someone needs to be to own a horse?
I’m so torn on questions like this… because I’m a big believer in personal freedom, but I’ve also had to watch horses suffer first hand because they’re owned by idiots. I guess in the grand scheme of things, my opinion on this really doesn’t matter because I don’t actually have the power to change things… but in a utopian paradise, I’d love to see people have to be licensed (like a driver’s license) to own animals, or even friggin’ reproduce. Do you know how many idiots out there spawn??

Have you ever gotten into a fight with your trainer?
Since I’ve never really had a long term trainer, no. The longest span of time I took lessons from a single person was around a year, and I can’t recall ever fighting with her.

Describe your dream horse.
Cinna with Topaz’s brain only black, not grey… haha. In all honesty, all of my Andalusians have been dream horses in their own way.

Does anyone in your family ride?
My mom is where I inherited my love for horses. She doesn’t really ride competitively any more, just trails and the occasional fun show. My husband likes to trail ride with me, and has competed at the local level in some fun shows in western pleasure.

If you could ride any horse in the world, which one would it be? Why?
Not that I’m in any way skilled enough for this, but wouldn’t it be fun to breeze a racehorse like Rachel Alexandra, or ride a dressage test on Valegro?? Realistically though, at this point I’d love to sit on a patient schoolmaster who would give me the chance to work on just ME for a change, not perpetually me and the horse at the same time. 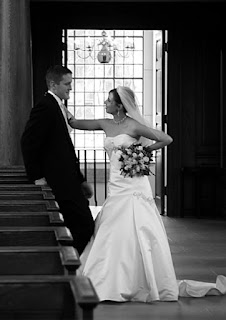 Also, although I'm typing this up on the weekend, it will be posting on Monday, so happy 7th wedding anniversary DH!
Posted by TrainwreckInTeal at 5:30 AM