At some point I really am going to try to write about the trails at VHR, but at this point its been 2 weeks so I should probably try to keep up with that's going on currently, and come back when I have more free time. I mean, historically free time is nonexistent, but whatever, lol. So after the eclipse last week, things continued to be manic at DH's job, which always spills over into my life, so horse time was limited. Over the weekend, we had a lot of things on the to do list -- move some hay for my mom, fix some water lines at both her house and our house (WHY IS THIS THE YEAR OF DIGGING UP WATER LINES). Unfortunately hers proved to be a lot trickier than anticipated, so we didn't get to ours (so guess what I'll be doing tonight? Blech).

Sunday I put my foot down that we weren't doing chores all day -- I wanted to ride! So my mom headed over and we loaded up the trailer. Initially I kind of wanted to check out a new (to us) trail called Cuivre River, but we got a bit of a later start than I wanted (because DH did insist on trying to start digging up the water line and had to be forcibly dragged away), so we decided to stick with our standby of Indian Camp Creek. The horses loaded like champs and we hit the road -- it was muggy and marginally hot when we got on the road, but I was super impressed that 2/3 of the horses unloaded without a drop of sweat on them -- the Kensington screens we installed really help with the airflow! Shockingly, there was only one other trailer in the parking lot, so plenty of space to park and get tacked up. 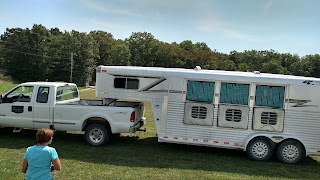 We headed out and decided to do our normal loop backwards -- normally all the fun creek access and sandy trails are at the beginning, and then it gets sort of rocky towards the end. Doing the loop "backwards" meant we got all the rocky bits out of the way at the beginning and then had plenty of time to play in the creek once the horses were hot and sweaty. Everyone handled the rocks well, and since it's been fairly dry lately most of the low crossings didn't have water in them. The one that did turned into a bit of a shit show -- Cinna really wanted to leap over it, and I am not about horses that fling themselves over creeks, so I wouldn't let her. She got herself fairly worked up, so DH came back over to give us a lead/buffer (assuming she couldn't rush it if Trigger was moseying across). And that might have worked, except the terrain was not terribly conducive to making that easy, and after Cinna got across, she got kind of panicked and rushy. She tried to pass Trigger in a very narrow space, wedging all four of us between two trees. DH was on the side with a small sapling, that bent out of the way, so he and Trigger escaped unscathed (although I think it really offended poor Trigger, haha). Of course on my side, there was a HUGE tree, and Cinna wedged my foot into it, then bent it around basically backwards when she panicked and bolted through. Thanks mare. I could still feel all my toes and move things around (gingerly), so I kicked that foot out of my stirrup and we kept going. 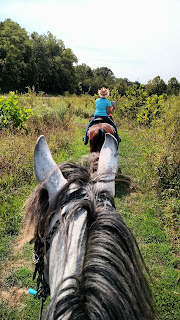 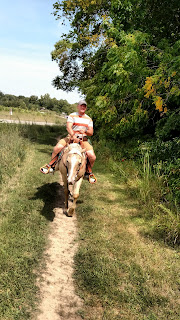 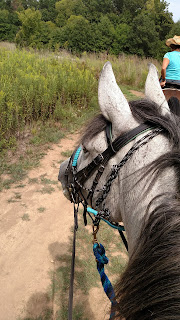 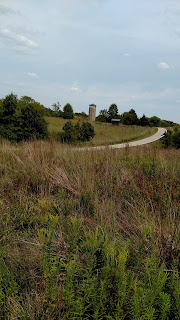 We also ran into quite a few pedestrians yesterday (more than usual!). We passed 4 groups of bikers, and thankfully all were polite. We met most of them in areas where it was easy to move off the trail and pass safely, and they were all very considerate about moving slowly. Hooray for people who understand trail rules! We stopped for "lunch" about halfway (DH and my mom had a sandwich, I had some cold pizza, lol). There was a convenient hitching post next to the table, and since I make it a point to leave a halter with lead on Cinna during most trail rides, I tied her up -- yay for life experience ;) she was super good (minus the 5 seconds she spent trying to rub her bridle off). While we were eating, a group of people parked nearby and asked if they could come see the horses. I was a little leery, but agreed (I figured they could pet Trigger, he's very solid). They ended up spending the most time with Cinna, and she ate the attention up. She had them braiding her forelock and hugging her face. They just could not get enough of her, it was adorable. 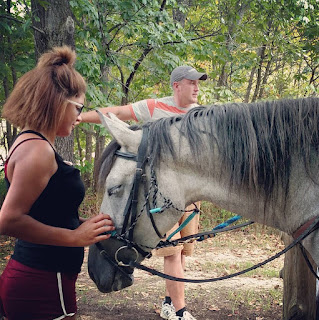 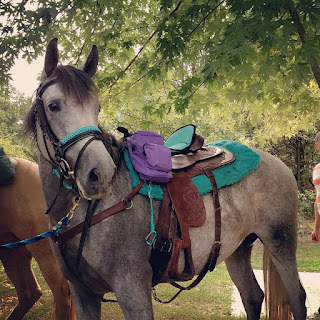 After our break, we hopped backed on for the remainder of our ride, including the best part -- the creek! Before the creek, we rode through some open fields, and I let Cinna trot (and it actually took some work to kick her up into the canter!). I was super proud at how well she listened -- IDK about any of you, but I always find it a little intimidating the first time I let a green horse "go fast" out in an open area, but she was foot perfect. I also had her lead most of the second half of the ride -- she'd been doing okay in the middle, but she walks WAY faster than either of the QHs on the ride, so it was a constantly give-and-take of not letting her jam her nose up anybody's butt without aggravating her by constantly "checking" her. We finally ended up down in the creek, and all the horses had fun splashing around. Trigger actually basically dragged DH off the trail down to the water, which was hysterical, because he's the most chill ploddy horse ever -- but apparently he really wanted to cool down his legs! Cinna wanted to splash and paw in the water, and kept thinking about rolling, so I kept her walking constantly. That didn't end up doing me any good, as she figured out that if she dropped mid-stride, I couldn't do much besides yell at her, haha. Thankfully I was wearing my waterproof(ish) fauxbarrys, and I don't care if she gets my western saddle wet. I really wish I could find somewhere local to take her and ride her in bareback and let her swim! Although with summer winding down, that might need to be a future project for next summer. 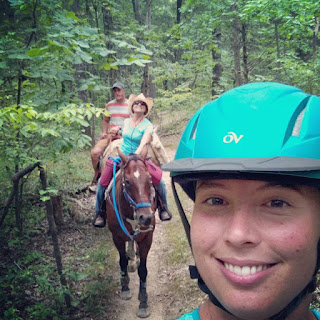 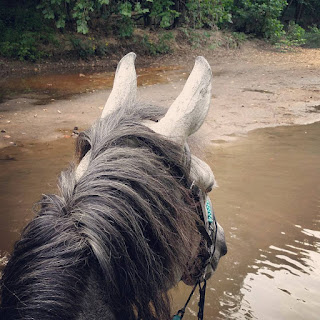 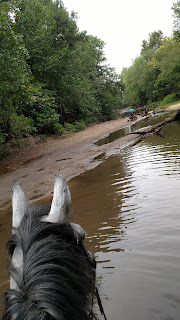 By the time we made it back to the trailer, everyone was pooped. We stripped tack, and headed home! Unfortunately we couldn't hose them when we got back (water line problems, ugh), but it did drizzle on them when we were turning out, and they did plenty of rolling in the grass. We rode over 7.5 miles in about 2.5 hours (I "paused" the app during our lunch break, so that time didn't count). 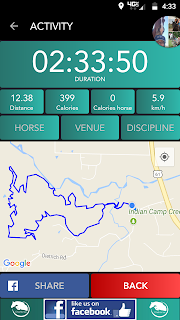 Definitely a much needed break in what has been a rather hectic month! Unfortunately I don't see things getting much better any time soon :-/ but I'll keep plugging along. All of the horses are happy and healthy (if under-ridden), so I'll try to focus on that and stop beating myself up about my lack of time to ride. And at least we'll have little goat babies to look forward to in the near future -- I need to post pictures of my very pregnant goats!
Posted by TrainwreckInTeal at 6:05 AM