As yesterday's spoiler photos post indicated, I finally got to ride a little last week! :) The weather didn't look super great heading into our three-day weekend (although it cleared up and ended up being nicer than expected) so when Thursday dawned sunny and beautiful, I decided to work a half day and play with the horses all afternoon. It was just what the doctor ordered.
I turned the geldings and Cinna out in the back pasture and grabbed Ruby for my first ride. Initially she was a bit put out that everyone else was racing around like lunatics, carrying on and having fun without her. But she got over it quickly and was all business for the first few minutes on the lunge line. Just to be safe.
She carried on the all business attitude under saddle, until she got a bit excited about the prospect of cantering -- so we spent a while doing infinite walk-trot transitions to remind her that gait changes happen when I ask and not when she feels like being a dolphin and leaping through the air, haha. 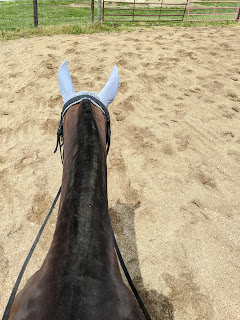 After we finished up, she enjoyed a quick rinse off before it was her turn to run and cavort in the pasture with the geldings. Cinna was NOT THRILLED to be ceding her spot in the herd while Ruby got to play with her boyfriends, but once she was cross tied and tacked up she seemed to remember that being a riding horse is actually a thing she still has to do. It's a rough life! She also got tossed out on the lunge briefly, and while she started out with her signature neck snaking move and pretending she didn't understand downward gait transitions, the fact that she'd spent the previous hour running the geldings around meant she didn't really have energy to by naughty (which was precisely why I rode them in that order lol). 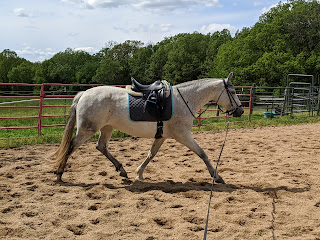 She was a really good egg for our ride. I was prepared for some theatrics in the canter departs, since it's been so long since she's actually been ridden, but she was surprisingly prompt and unsassy about them. I think at 8, she's really FINALLY starting to grow up. Every time I think that she ends up starting to act even more mature and then I'm like "no wait, she's really grown up this time!" haha. She did spend the first half of the ride wanting to motor around in her Iberian sewing machine trot, but I just ignored her and focused on myself, and eventually she heaved a big sigh and relaxed enough to stretch down a bit. After getting cooled out, she also enjoyed a quick rinse, then back into the pasture to terrorize everyone and make sure they hadn't forgotten who was boss in the 60 minutes she was gone.

All of us are unfit, so we kept things short and sweet -- even so, my legs were SCREAMING by the end of the weekend. But it's a good pain, right? Finally getting back in the saddle to get the horses legged up again for... well, it's not like we have any competition or clinic plans in the near future, what with the complete chaos going on in the world right now, but it still felt good to be back in the saddle and making incremental progress towards improvement! Tune in tomorrow to hear about tack shed shenanigans ;)
Posted by TrainwreckInTeal at 6:00 AM