You guys I legitimately am not sure I could be more excited about the work we did Sunday. The space looks COMPLETELY DIFFERENT now. I keep going in there to just sit on the floor in awe and stare around, boggled by all the possibilities. But I guess I'm getting ahead of myself. So let's start at the beginning. We got an early start on the walls Sunday morning. The panels were 8'x4', which was convenient, as the walls were 8' tall. Of course, because we needed the panels to break over the studs every time, we did need to do some cutting. 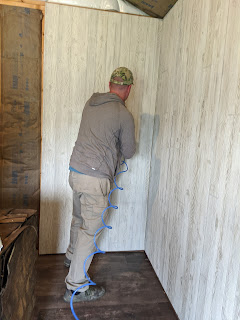 The first two walls were pretty easy. I had already planned to trim out the floor and around the doors, but the way the panels met in the corner made it pretty abundantly clear I would have to do some sort of small trim piece in the corners as well - to make sure the wall panels met cleanly with factory edges, any cuts went into the corners, which mean they're a titch messier than the rest. But overall, the first few walls went up like gangbusters and I was feeling pretty goodt. 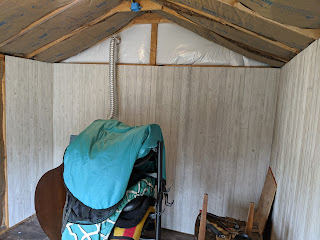 Then came to the "hell panel" -- it had a light switch, an outlet, and a junction box where some of the wiring split so we needed to keep access to it. 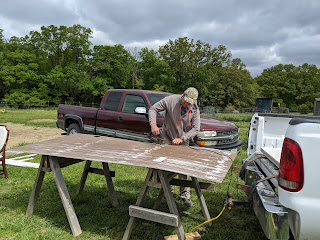 By the time we got to the last wall, it was a breeze -- the french doors take up most of the wall, and since I planned to put a shelf over the door, I didn't mind using some of the scraps up there (so it looks less "pretty" but it's in the least noticeable place). I really wanted to use as much of the scraps as possible so we didn't have to go buy additional panels. We were on a roll, so we went ahead and slapped up the center vault pieces that needed to be cut around the light boxes before lunch. 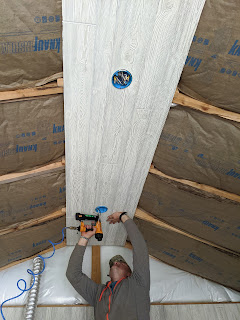 At that point, I needed to pop into town for more supplies, because in order to hang the chandelier, we needed to have the medallion ready to install -- and I wanted to paint it, but didn't have the right paint at the house. While I was in town I grabbed some white caulk (I thought it might help smooth out some of the gappy edges), and buzzed back to paint my medallion.
The remainder of the ceiling panels were ROUGH. While the panels were lighter than plywood, or some of the other stuff we've worked with in the past, we returned all of the walkboards and most of the ladders we used for the garage, so it was just me on a tiny stepstool and DH on the ladder. There was.. a lot of creative use of language, to be sure. But we got it done! 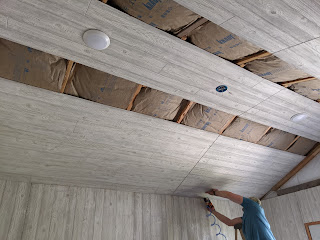 At that point I could tell DH was ready to quit. We had one full sheet left, a ton of scraps, and both gable ends to do. Those gable ends still weren't insulated (well, they had the original insulation in, but hadn't received the extra insulation like the rest of the walls). And the original framing of those ends meant there was nothing to staple the panels into. So, he dug through our lumber pile (plenty left over from the garage) and built the necessary framing to tack up the last few pieces.
I know at this point he was 100% done with all of it but I realllllllllly wanted to see my chandelier hung. So. My poor browbeaten husband hung the medallion (which snapped right into place on the light box, easy as pie), and then tried to assemble the chandelier. I had already hung all the crystals, but you needed to thread a screw through the top dome, then through the apparatus that held all the crystals, and to get it done you needed like... four hands and also for gravity to not be a thing. Finally out of concern he was going to drop kick it into the wall, I climbed up there and got everything positioned and then he helped me screw on the final piece that held it all together. 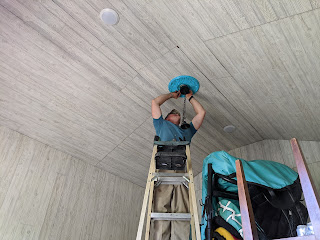 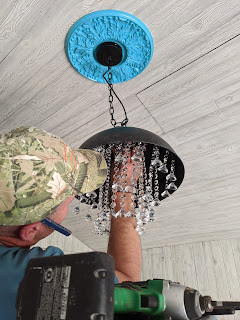 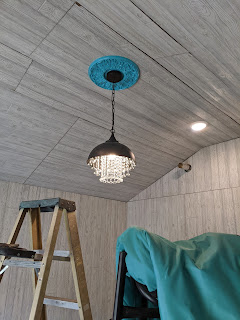 He wasn't really happy with how the ceiling turned out (a lot of non-factory edges were joined up so there were noticeable gaps), so he climbed back up one more time with a caulk gun to fill in the worst of the holes. He's a pretty impatient caulker (finish work is NOT his jam), but overall it did help make the ceiling look more cohesive - definitely has some rustic charm.
So! That completes the utter TRANSFORMATION of my tack shed! From utilitarian catch all storage space, to.... DRUMROLL PLEASE..... the Taj MahTeal! ;) (or tack palace, if you prefer). Keep following along for my art projects to decorate it, and getting everything organized!
Posted by TrainwreckInTeal at 5:30 AM