So... Did a thing this weekend!

We've been truck shopping for a while -- when the diesel went in this June for some minor maintenance that turned into some MAJOR work, I started window shopping. At the time, we decided to fix it over buying something newer, but I kept the idea in the back of my mind. I've never been a huge fan of hauling with the diesel (it's mostly the manual thing but also it's a BITCH to start in the winter), but I dealt with it because it was supposed to be the holy grail of engines to haul with. But after the breakdown two weekends ago, I just couldn't anymore. It already stressed me out pulling up to stop signs on hills or people creeping up too close when I had to try to take off without letting it roll backwards at all, but now the idea that the DRIVESHAFT might just... FALL OFF and strand me. Nope. I was done. 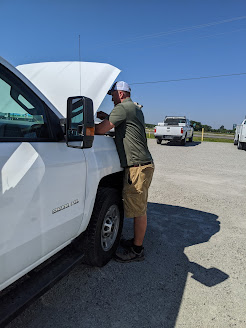 It worked out that DH was making his last car payment this month, and he banks at a credit union that gives you better perks if you have a loan with them. We had been kicking around the idea of buying a bigger boat, but couldn't seem to find any that we agreed on (I wanted something more ski/comfort and he wanted something more fish/utilitarian lol). Soooo we decided a newer truck it was!

Let me tell you, what people want for used trucks is INSANE. Like, $30k for something with THREE HUNDRED THOUSAND MILES. What in the fuck? No! We were aiming for something 2012 or newer, under 100k miles, extended or crew cab, 3/4 ton, and less than $30k (preferably A LOT less). Locally there weren't a ton of options - I widened my search parameters and came across a promising dealership in Kansas - he buys commercial fleet vehicles off lease down south. They're typically low-frills work-type trucks, so it's kind of a niche market and not everyone's cup of tea, but it was one we could live with. Everything locally in our parameters sold within about half an hour of being listed (or wasn't actually listed at all, just sold to a previous dealership customer), so when I found something I wanted at the Kansas dealership early in the week, I assumed it would be sold by the time we could get out there...but miracle of miracles, it was still there when I touched base with the salesman on Friday night. And since he does a lot of out of state sales, the extensive photos (70+ of every conceivable angle lol) and discussion we had prior to making the 4-hour trip meant zero surprises when we showed up. The truck was just as advertised - maybe even nicer! It did have some dings and flaws, you could tell it had been a work truck, but mechanically it was sound as a dollar and as a 2015 with 70,000 miles, it was perfect for our purposes. The Carfax showed all the expected maintenance (done regularly by dealerships, because commercial vehicle). Icing on the cake? The extensive aftermarket add ons of a massive brush guard, a "headache rack" to protect the back glass wired with lights, super heavy duty rear bumper/hitch, almost brand new tires all the way around, and best part? A top quality gooseneck hitch! Literally ready to hook my trailer up and go! Even before you factored in all the extras, we still paid significantly less than the Blue Book/NADA estimated value, and I couldn't be happier 🤗 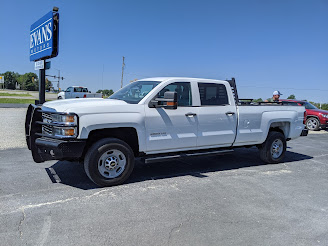 Super excited to feel like I can haul out again with less worries about my truck 😁 of course we have to wait for the title in the mail and then hassle with paying sales tax/registering an out of state truck, so I'm sure it'll take a while to get the license plate situation sorted out, but I can't wait to hit the road!

Posted by TrainwreckInTeal at 5:15 AM