Don't worry, the graphic photos aren't until further down in the post, so you can read the first few paragraphs even if you're squeamish! I'll give you a warning and a bunch of dead space before the icky stuff. On Wednesday, Jack had his second rounds of extractions for his EOTRH (first round in June). A few weeks ago, I noticed that he had broken off one of his bottom incisors. When I emailed his vet a photo of the broken tooth, she was on vacation (bless her), but she scheduled us an appointment for when she was back in the office. The date she had open also happened to be the day of my virtual kickoff for my charitable campaign at work (aka THE BUSIEST/MOST STRESSFUL DAY OF MY YEAR), so I had DH take off work to run Jack up to the hospital in the morning.

He is not always a reliable trailer loader (when I got him the sight of a trailer would send him into fits of rearing and striking at anyone within reach, he's definitely come a long way since then but I never expect him to load first time), so I headed out to help DH load him up before I left for work. He climbed right on without a fuss, and I hoped that was a good omen for the day. That hope was dashed an hour later, when I found out that despite the vet emailing me about the appointment and confirming it earlier in the month, apparently it wasn't actually on the hospital's calendar and they were not expecting him. My mom (who works in equine now) called me to ask me to forward the confirmation email because he wasn't on the schedule, and I might have loudly yelled "ARE YOU F#$%ING KIDDING ME" at the phone before she told me I was on speakerphone.... Sorry vet hospital reception area, I have been a little overwrought this week! 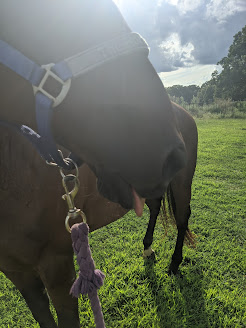 At any rate, they figured things out, and fit him in for rads right before lunch, then the vet called to discuss them with me. Aside from the broken tooth, the two next to it were also very affected by the EOTRH, and the tooth on the other side of them was fractured as well. In order to get to it, she'd have to take the affected teeth too, and at that point she might as well just take all of them so I don't have to come back in 3 more months for the rest. I was totally fine with that, as it was pretty much what I had expected from previous rads/conversations with her. 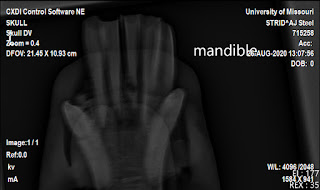 Last time he had extractions, they did him first thing in the morning, so he was ready to go early in the afternoon. This time, since they did it later in the day, he wasn't ready until about closing time, which actually worked fine for me -- I had to take less time off work and DH got to be productive and run a ton of errands. But I was so frazzled from my work day that we were halfway there before I realized we forgot to throw Trigger on the trailer as an incentive for Jack to load. Another oops! Thankfully, he loaded like a champ again (although somewhat groggier and drooling blood all over me). I got another very expensive goody bag full of drugs and teeth, and we brought him home. Based on how his aftercare went last time, I modified how I was feeding him (still doing the soaked food, but starting on a smaller amount and working back up to his usual amount). The first few days I am syringing the meds into him, to make sure he gets all of them (or most of them at least), and then based on how he's eating I may go back to crushing them up/sprinkling them on his food. I mixed up more of the clorahex rinse and am syringing out the holes as instructed, and he's got his follow up scheduled for next week. Same as last time, he immediately dug back into grass/hay/food, so I think he feels much better without those icky teeth in his mouth. The tongue droop is definitely permanent now. Poor old king droopy tongue :)

I hassled my mom unmercifully about her lack of photos last time, so she did a MUCH better job this time. So much gore. Are you ready?

No seriously, they're gross.

I posted them on IG and apparently they got censored for being graphic and you had to click to uncover them (EVEN THOUGH I WARNED PEOPLE IN THE CAPTION THEY WERE GROSS).

OK surely if blood freaks you out you've stopped reading by now, so here are the gnarly pics! 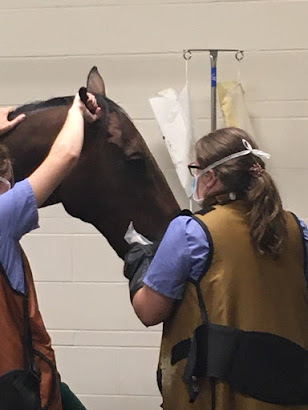 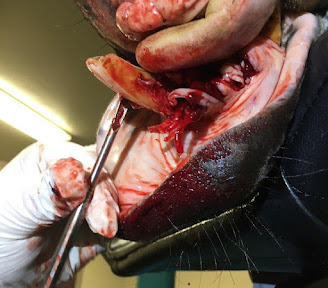 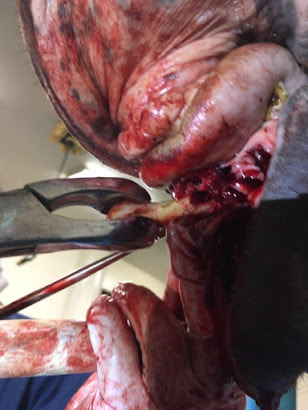 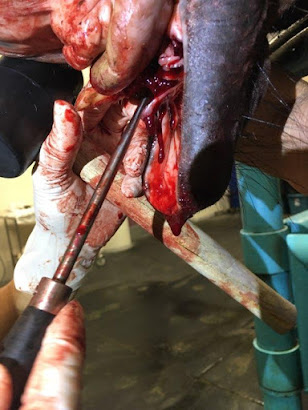 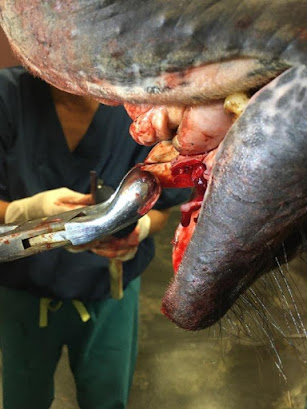 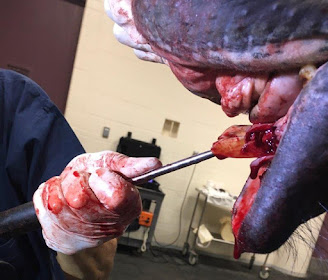 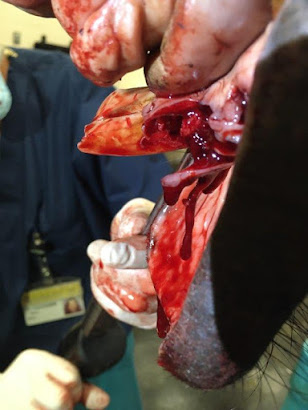 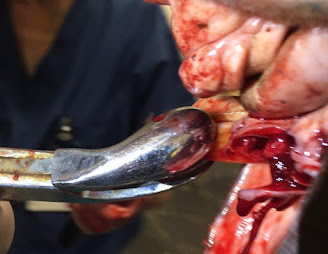 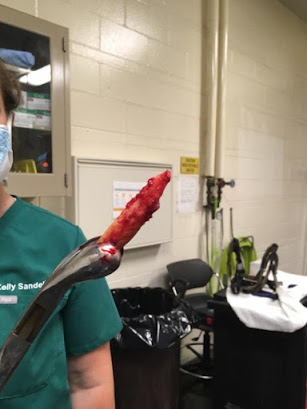 For all those who really like the squicky pictures, I hope you enjoyed the gore! I again understand why they don't really encourage owners to come watch these sorts of extractions, lol.