Why We Can't Have Nice Things

Saturday, I noticed Jack was hanging his tongue more than usual. Since his extractions, he always kind of pokes it out of his mouth, but this looked... Different.

I have no way to tell when he actually broke that tooth off. He didn't seem to be in any discomfort, was still eating and drinking as normal, but naturally I shot off an email with some photos to our vet. Just my luck, I got an auto-reply because she was out of the office on vacation, so initially I planned to call up on Monday and see what they wanted me to do. But bless the vet, she was still checking her email, so she had the office pull his rads from the last visit and she reviewed them. The tooth that broke off is one we had planned to extract later this year, but we were trying to give him a little recovery time (also let my wallet recover).
As is frequently the case with horses, they're really good at messing up our plans ;) so instead of waiting until later this fall for another round of tooth-pulling, Jack has an appointment later this month to pull the root of the broken tooth, and anything else that looks suspect based on new radiographs. Based on the way he bounced back from losing all the tops, I'm not super worried, but it is always in the back of my mind that he's no spring chicken. I'm just going to focus on getting as much alfalfa into him as possible between now and then, because I'd like him to go in with a little weight cushion, knowing that adapting to losing even more teeth might be rough on him. 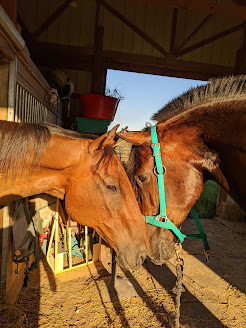 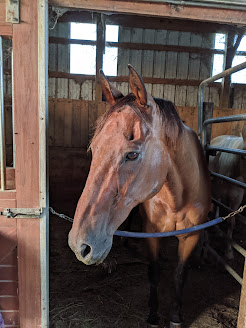 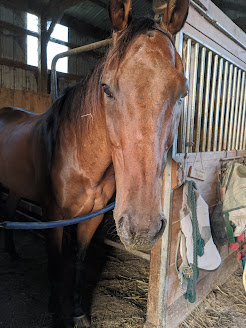 Horses, man. This is why we can't have nice things!
Posted by TrainwreckInTeal at 5:00 AM