*I pushed my blog rebrand live without realizing the links wouldn't update, so if you were previously following dressagebarbie.com you'll need to update to trainwreckinteal.com - sorry about that!*

So in my prep for POSSIBLY entering a schooling show at 1st, I reacquainted myself with the current tests. And remembered that many moons ago when I DIY'd my existing arena letters, I only did ones for a short court (because at the time I was happily bopping around intro/training on the first of several green horses I started from scratch, sigh). And I wanted them easy to move and store, because at the time I didn't have an arena at home, and then boarded somewhere where I couldn't leave a court set up all the time.

A few years ago (hahaha I did the math I mean like 6 years ago Christ) when I was schooling a lot of the pieces of 1st with Topaz, I did buy more of the trash cans I used to make my original letters, but never got around to painting them, and they gradually got absorbed into my life for other functions/misplaced. No matter, I thought to myself, my Walmart has carried that $1.97 white plastic trash can for YEARS, I'll just go grab more. Jokes on me. Our Walmart recently underwent a massive renovation and apparently is now too bougie to carry things like cheap plastic trash cans 😭😭😭
So. I improvised! I bought all of the plastic plates they had in that color, and a can of heavy duty spray paint/primer/all in one. A few minutes on Amazon Prime produced a set of plastic letter stencils. And I explained my weird idea to DH (who is more than used to them at this point), so he'll sort out some way to permanently hang them in the arena. Considering I've had the arena for....5? 6? years?... At this point, it's probably time for a permanent solution lol. 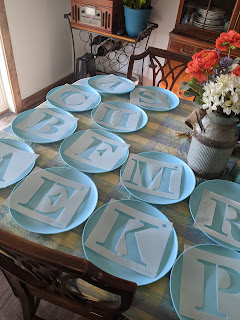 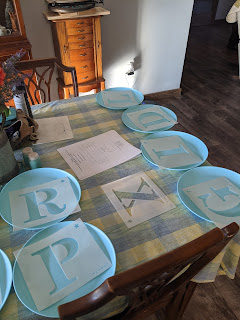 I was hoping this update would include photos of them painted and actually HUNG but DH and I are both struggling to get back in the work groove after a nice vacay (#firstworldproblems, amirite?), so it's been everything I can do to fit in a ride before I collapse on the couch in the evenings. No matter, three day weekend kicks off tonight and Mondays weather looks garbage so maybe we'll have a painting party! 😁