....it is not a brilliant plan to schedule a lesson the morning after you get back from a weeklong vacation where not only did you not ride at all, but also you did basically ZERO physical activity. Oh and your horse had a week off and spent it stuffing her face in a round bale the whole time. Yeah. I make poor life choices, haha. However, there's a local schooling show at the end of the month I'm considering sending off an entry for, and I didn't want to let the weekend pass without scheduling a lesson -- and new trainer was going to be gone at a clinic Saturday/Sunday, so a Friday lesson it was! I had already taken the day off work (wanted to give myself a travel buffer in case we had any issues), so off we went!

DH came with, so I do have some media! He took like 650 photos and several video clips, and I DO NOT have the energy to go through all of those carefully, so I just grabbed a few that jumped out at me. Ruby came out like she'd had no time off (bless her and her wonderful brain), and I did okay for the first half of the lesson, but SERIOUSLY ran out of steam for the second half. Which, naturally, was when we were working on the canter, and when I really needed the energy, haha. 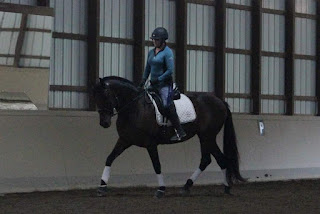 We're slowly chipping away at getting the same suppleness on both reins, and working on stringing together the nice moments for longer periods of time - like new trainer said, if she can do it for 5 strides, she can do it for 25 :) we had some really nice serpentines, although the leg yields were definitely questionable, haha. I'm also getting better about remembering to ride every stride, and to constantly be checking in with her to make sure I have the access that I need to influence everything. There are so many body parts to try to keep straight (both mine and hers!) but it's coming along.

I'm starting to get the same adjustability in the left lead canter that I seem to have an easier time accessing in the right lead, although the right lead depart is still hella sketch when we're tired, but I hope that by this weekend with some good rides in between lessons that it will be more accessible. New trainer had plenty of good things to say again about our progress, and that she can see how hard we're working and that at each lesson there are definite improvements :) and she still loooooooves Ruby <3 heart eyes. More nice comments on her topline and her neck and just her general willingness.
Watch the videos at your own risk, DH took them with the DSLR and they're not super steady and it sort of goes in and out of focus... I told him next time do videos with his cell and stills with the DSLR, but I doubt he'll remember, lol. Media is media I guess!

Today I'm going to print out the latest tests and an entry for that show and start thinking on if/what we should enter!