With the tack sale taking up most of my Saturday, I ended up snagging a Sunday afternoon lesson time, hoping to sleep in a bit with the time change :) and then my original time got bumped back a little further, because my trainer had a lesson of her own scheduled. That didn't bother me a bit, because I'm so appreciative of riding with someone who also keeps pursuing their own education! DH was helping a neighbor with some electrical repairs, so I was solo this day (leading to a severe lack of media, sorry lol).


Trainer's lesson had gotten started a little late so while she was putting up her horse, Ruby and I had a leisurely warm up, then when she came back I had her look at all my scoresheets from the show. We had texted over the weekend during the show so she knew approximately how I felt about things (and then she saw the show photos, including the outtakes lol), but it was still nice to be able to go over each individual test with her. All the areas that needed improvements were areas we were already knew needed work and are actively working on, and the 8s on some of the movements we hadn't put much effort into yet (trot/canter lengthenings), was definitely a nice bonus! She got a chuckle out of some of the same comments I did, including the one about me giving the horse confidence even if the horse chose not to listen, lol. That actually got us off on a rabbit trail about how confident Ruby is and how she and cinna are polar opposites, but that's a train of thought for another day. Ultimately she seemed pretty pleased with the feedback, and we had a good chat about how something I originally thought was a total flyer that might go poorly ended up being a really good experience and showed me we ARE ready for the level, imposter syndrome be damned. 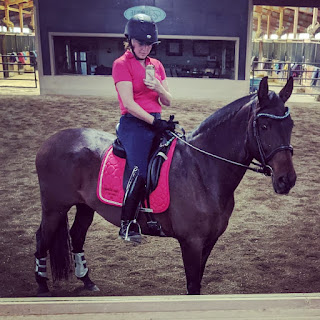 I also had her look at my boots, since I had a sort of meltdown about them show weekend thinking maybe they didn't fit and I'd wasted my money, but she loved the fit (and actually I've worn them quite a bit since the show with minimal issues). She also had me drop my stirrups a hole, which helped with some of the rubbing I'd originally experienced. With all the chit chat out of the way, we spent a good portion of the lesson working on the canter. Clearly that was an issue in our disaster test, but even in our "good" tests, we weren't showing a clear enough difference between the working and lengthened canters, and the transitions in and out can still be dicey occasionally. So we worked on changing the bend a lot at the canter to unlock the base of Ruby's neck so she stopped flinging herself around. It was hard, but by the end of the lesson we'd gotten some REALLY quality canter, so I was excited to see if I could replicate that on my own at home. New trainer (and some of the barn ladies) are at Finals this weekend, so no lesson for me, but hopefully we can pick back up the following weekend. Between all the shows and clinics she attends and my work schedule/the distance, I'm averaging about 3 lessons a month, which seems to be a pretty comfortable amount. Obviously I'd love to do more if time and money allowed, but I'm still seeing her regularly enough that we can catch and fix issues before they get out of hand, but I'm also having plenty of time to work on homework between lessons (well, when the weather cooperates!).

Today is a holiday so I've had a leisurely morning (I typed this from my phone drinking coffee on my couch covered in dachshunds lol), but the weather looks decent so after some chores around the house I think we're gonna hit the trails!