I'm trying to get a little better about tentatively planning trail rides a few days in advance, so I can meet up with friends :) last Wednesday the weather forecast for Black Friday looked promising, so I tossed up an open invitation to meet up on Facebook. Had some interest, so when Friday dawned and looked even better than expected, I was thrilled! I checked in with a few folks, and ended up making plans with a local friend (who made a few appearances on the blog in the past when she came out to give me lessons). DH had other plans, so it was easy to offer her the ride on literally any of mine, and naturally she picked Ruby ;) that was perfect, because I knew I needed to get Cinna out, and I knew my friend wouldn't be phased by any baby brain moments we had, while providing Ruby as a steadying influence. I threw a variety of tack in the trailer, grabbed a few water bottles, and then when she showed up around noon we tossed the horses on the trailer and hit the road! I had originally planned to go to Three Creeks because it's more local for my friends in that area, so we stuck to the plan even though no one else was meeting us. The drive passed quickly, as we gabbed and gabbed about all things horses! (Man it's times like that I miss boarding because I LIVE for conversations like that!) 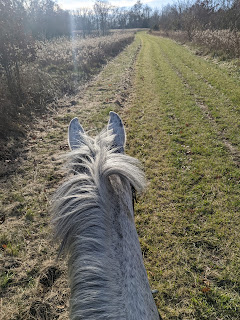 We tacked up quickly (both in western saddles for the true Missouri experience, lol), and hit the trails! There had been a little rain earlier in the week, so there were a few slick and muddy spots, but we were in no hurry and just let the horses navigate them carefully. Cinna realllllly wanted to lead but she also wanted to slam on the brakes anytime she saw anything mildly concerning (aka very frequently), so we ended up riding the majority of the trail side by side, which worked out well - doubly well for ease of conversation, as we kept gabbing the whole way 🤣 seriously my voice was tired Saturday, lol. 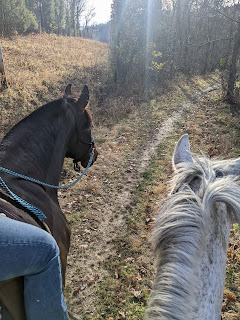 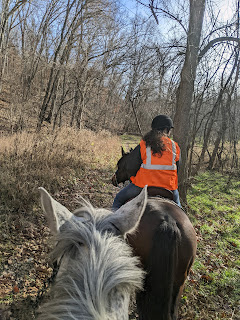 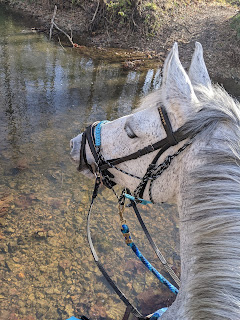 We stopped to let the horses play in the creeks, since they both love it. Ruby loves to just hang out, Cinna want to splash around - I tried to keep the splashing to a minimum because even though it was lovely November weather (sunny and 50), I did NOT want to go swimming! Haha 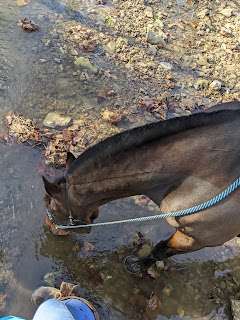 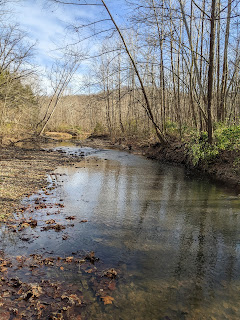 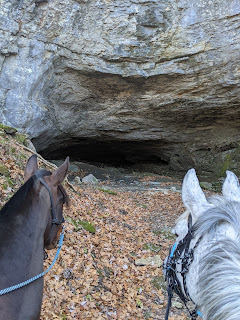 One of my goals for this ride was to go check out the cave! I have seen SO MANY photos of it, but somehow managed to miss it on all my previous rides, haha (#talent). Lucky my friend was amenable to this plan, and not only did we find it, but we took the horses right up to the mouth of it - cinna was ENTRANCED. She's so funny about the things that do/don't scare her. She was totally fine when Ruby was up with her, but when I asked her to stand while my friend backtracked a bit to get a good photo of us, she got antsy for a minute. She did settle again, and that was really the extent of her sassiness on the entire ride - that, and a desire to be plastered on Ruby's butt any time we rode single file lol. 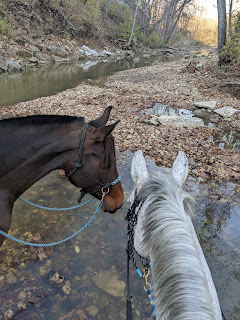 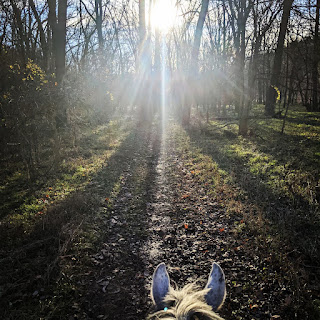 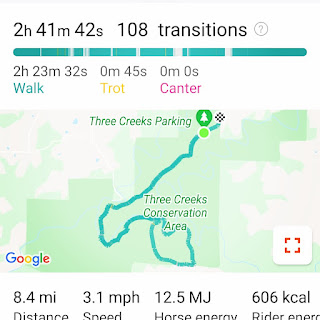 We ended up riding for a little under 3 hours, and covered almost 8.5 miles (according to equilab). We definitely spent a lot of time just stopped hanging out (in the creek, at the cave, and then when we were trying to pass a group of people in the woods doing god knows what (when we started to walk up there was a guy carrying a huge log that he then THREW into the creek, which the horses were not amused by). My Garmin thought I climbed 42 flights of stairs, if that gives you any indication of some of the elevation we (the horses lol) covered. The girls were still perky with pep in their step when we returned to the trailer, even if they were a smidge sweaty (Cinna more so than Ruby, since Ruby is at least partially clipped). They loaded back up like champs and dug into their hay for the ride home - my friend was super helpful getting them turned back out until dinner and getting the trailer cleaned up (leaving it hooked since I had a lesson the following morning). Hopefully we'll get to do it again soon! She has a super busy schedule, but doesn't mind me periodically bugging her even when she can't go, which is perfect, haha. And it was particularly nice to get both the girls out! When push comes to shove I normally pick Ruby for trail rides, because she LOVES the trails and is just so easy to ride out there, but Cinna is the one who needs the miles more. So this was the best of both worlds :) and I got to have great conversation the whole time! Much as I love DH he doesn't want to talk the entire ride dissecting riding theory and talking about trainers and dressage and horse things 🤣 all in all, a blissful way to opt outside on a gorgeous fall day!