Over the weekend, I went to a tack sale at a local farm - this was the second annual event, but it doesn't look like I wrote about it last year. Ah well. Last year I took some stuff I had lying around and made it a game of only spending money I made off the tack I sold that day, so I ended up about breaking even - that's where I picked up Trigger's hoof boots, and I think I got a fly veil and a few pairs of breeches. Nothing extravagant, but it was fun (particularly since last year we'd all been cooped up so much because of Covid, so this outdoor event with lots of social distancing was a great chance to see everyone!). This year, I made sure to mark my calendar as soon as it was announced - I didn't NEED anything, but I figured it would be a fun, low-stress way to catch up with everyone! As I left the house in the morning, DH called after me "don't spend any money, you don't need anything" -- famous last words lol. 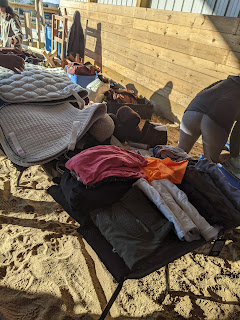 I did a walk through when I got there and didn't see anything I NEEDED, but I definitely spotted some things I WANTED.

That table was someone unloading like 20 years worth of pony club stuff, and I did pick up three pairs of black reins super cheap - since Cinna has broken more than one pair, it's always nice to have spares! I had money in my venmo account so I didn't "spend" anything, and was feeling pretty good. Then I spotted that teal ring back, and actually had to *gasp* spend money... and it was all downhill from there, lol. I got talked into trying on a ROMFH show shirt, and it fit so well that clearly I had to buy that too. Then I found two pairs of full seat tights with belt loops, and the seller was willing to make a deal for both. Had been considering adding magnesium to Ruby's diet, and there were two unopened bags of MAGrestore, so those came home with me too, sigh. Biggest impulse purchase of the day was definitely a cob-sized PS of Sweden Paladin noseband on a headstall - I figured it might fit Cinna, and if not, I could easily resell it for what I paid. Someone gave me a wheelbarrow water carrier (thought it might be good for shows?) and at that point I had to cut myself off, lol. I did expend considerable effort helping friends sell their things, because that was fun for me!


So the moral of the story is, I spent entirely too much money, but boy did I have a fun day!