As the second ride of the show Saturday, I was up and at 'em bright and early. Actually, I woke up well before my alarm with a pit in my stomach, and stared at the ceiling for an hour trying not to focus on all the ways the day could go terribly wrong (I know, such a chipper optimistic sort I am, lol). I already had everything in the trailer loaded, so all I had to do was feed horses, feed the dogs, get dressed, kick everyone else out, and throw Ruby on the trailer. We arrived in plenty of time, and I just went straight to the competition arena to school - they were letting us ride in there before the show started, so I figured the more ride time in that arena, the better. I was back in my old show boots, and Ruby warmed up great.

I was feeling about as ready as I could ever be when I headed down centerline for our first 1-1. It rode pretty well - I definitely rode it conservatively, particularly on the trot lengthenings (since Ruby has a tendency to run away vs actually lengthen). Our stretchy trot circle is sort of non-existent at the moment (or rather, it exists, but is there is no bend and ZERO regulation of her running away with me), but I felt pretty good about the rest of it! I ended up having quite a bit of time between my two tests, so Ruby got to go back to the trailer and chill with a bucket of water and hay bag, and I had plenty of time to pick up my test and read all the comments and see what I needed to work on for 1-2. I was the only one in my class, so the blue ribbon wasn't unexpected, but the 64%+ that I scored definitely was... I cried happy tears sitting on the wheel well of my trailer, leaning against Ruby's shoulder (she was really uninterested in my hysterics, lol). 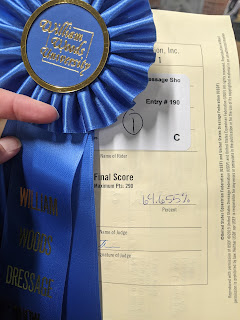 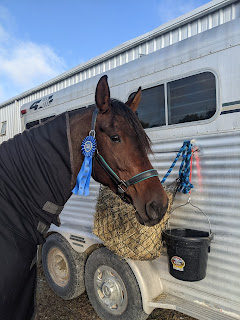 Some highlights from the first test include an 8 on her free walk (which is pretty normal for her, her walk is killer), 8s on both canter lengthenings (joke's on me, that was the only canter I could get out of her in the ring that test so my working canter got dinged because there wasn't much difference lol), and then a 7.5 on our final centerline. The judge 100% had my number on our tracking left being fine/tracking right being stiffer, but overall, I wasn't mad at all about any of the scores (nothing below a 5, which I sort of expected our first time out at the level lol). 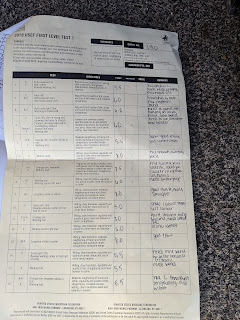 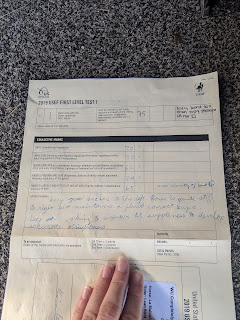 Having that under my belt and knowing the scores indicated we belonged at the level (aka it wasn't the TOTAL reach I sort of freaked out it might be in bad moments before the show), I felt way less pressure for our next test. She warmed up for 1-2 well again, and it felt pretty similar to the first test. Again, literally zero recognizable stretchy circle (especially since this one was to the right, aka our bad direction), and Ruby actually decided one of the trot lengthenings was intended to be a leg yield so that diagonal rode a little banana-shaped, but I managed to keep the hamsters on the wheel in my head and keep riding through the entire test (historically sort of hard for me - and just wait, it gets better on day two LOL). That test was good enough for another first (in a one-horse class, har dee har har) with a 63.8%+! 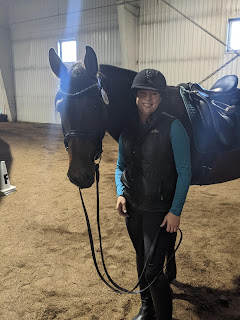 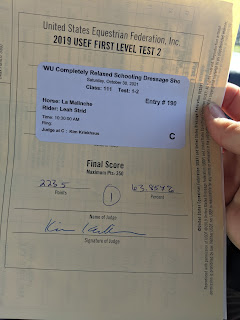 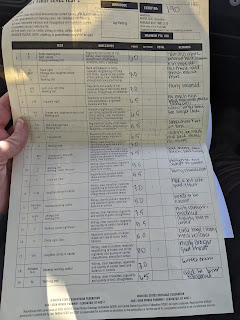 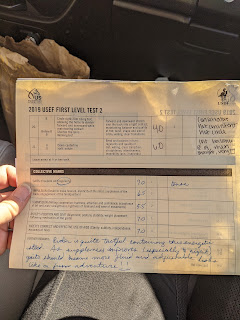 Highlights include another 8 for a canter lengthening, some improvements in the transition between our lengthening/working canter, and I'll take those 7s on rider's position/use of aids... and then a super well-deserved 4 on our shitty stretchy circle lol. I did take heart at the "rider is quite tactful in containing this energetic steed" lol. After picking up my second test, I tossed Ruby back on the trailer and was home before noon! She enjoyed a little turnout time in the back pasture (because I wanted her to stay clean), and then DH and I actually headed off on an adventure to pick up the winter's worth of alfalfa for our old men!

I was so exhausted I actually napped on the way to/from picking up hay, and then rallied in time to edit and post some photos on FB from day one! Enjoy some show photos from DH below, and a video my mom took of 1-1 :) 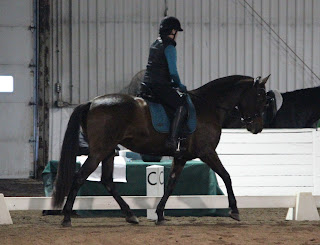 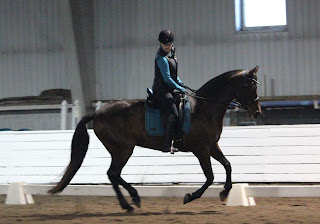 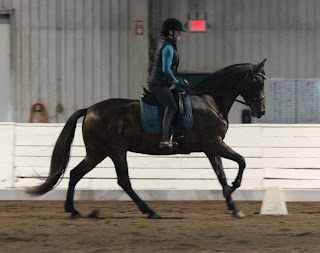 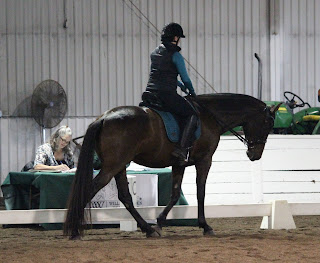 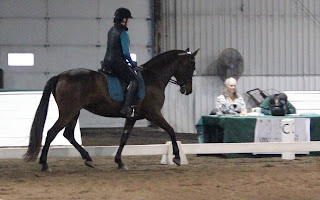 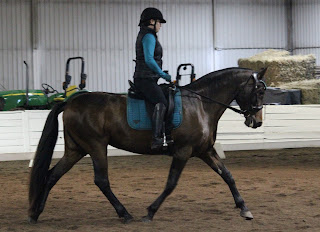 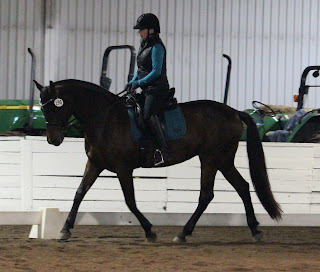 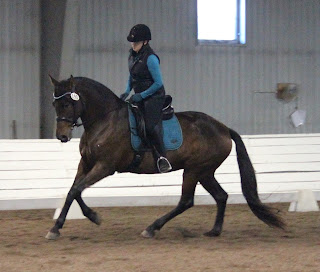 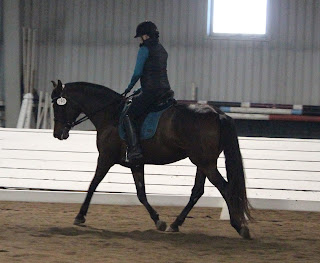 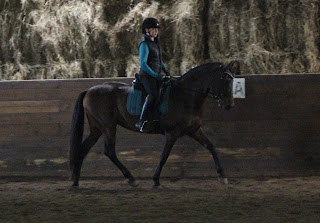 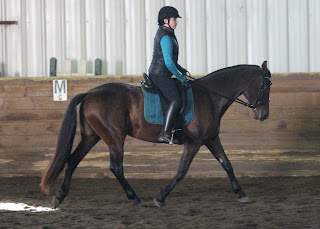 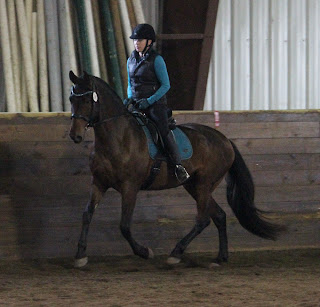 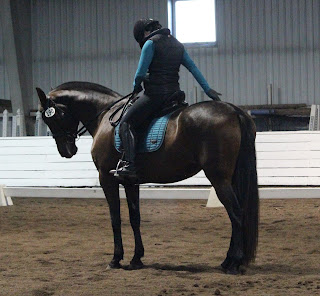 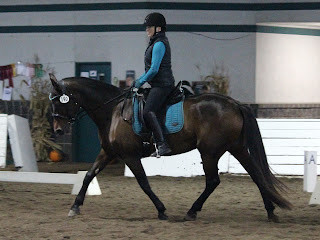 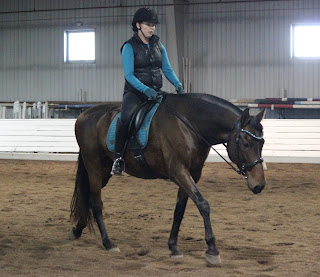 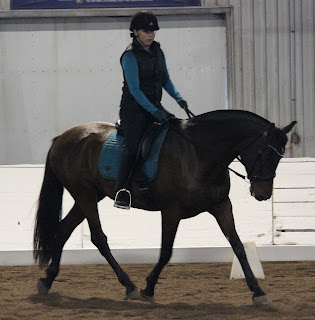 Stay tuned for day two! Much more drama, much less zen hahahaha.
Posted by TrainwreckInTeal at 5:00 AM