After things going so swimmingly on Saturday, I felt really good about Sunday! Ha. Famous last words 🙃 I had later rides (10:30/11:30ish), so I had a leisurely morning before we headed up to the show. Probably should have planned on getting there a little earlier, Sunday was the day with more haul ins, so we had to squish the trailer into the last available space.

Ruby was uncharacteristically "up", and decided she was IN LOVE with the (admittedly super handsome) gelding at the trailer next to us, and needed to scream at him repeatedly. Super unusual behavior for her, when when she and Topaz showed together every other weekend, Ruby never seemed concerned if they were apart. And she gives zero shits about Trigger when I pull her out of turnout to ride at home. Unfortunately, said handsome gelding was in both of our classes 🥴 meaning he was in the warm up at the same time as us, and then we took turns "babysitting" each other (show management made sure there was always a horse outside the arena so the horse in the competition ring didn't feel alone). So... That went... Well 🤣

The first test was an absolute shit show - a trainwreck in teal, if you will 🤷‍♀️ when we walked in, the show manager (who is the lovely instructor who came out to teach us a few years back) commented about how "up" Ruby was, and it definitely went downhill from there. I managed to sort of keep a lid on things until it was time to canter, and then all hell broke loose. Like super literally. She just BOINGED off down the long side and was disinclined to acquiesce to any requests I made concerning tempo or direction... Flying changes everywhere, bolting off the rail a good 6m before we were supposed to ride a circle... I just sort of went with it and tried to keep her in the arena and not fall off 🥴 the right lead canter was equally a production - she picked up the wrong lead multiple times before I finally got her to pick it up correctly. I'm sure you can imagine what that did to alllllll our scores for the canter movements ⬇️⬇️⬇️ here's where I *am* proud - I shook off the bad movements and focused on each new one as they came, and managed to pick up a few more points for the post-canter work. This was the test where the halt is at G, and instead of crying down centerline, knowing how poorly things went (which is ABSOLUTELY something I have done before, in front of this judge even), I was giggling riding into my final salute... Promptly apologizing to the judge for the shenanigans-filled test! Enjoy the outtakes 🤣🤣 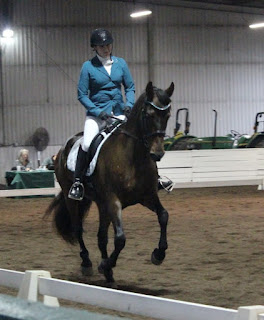 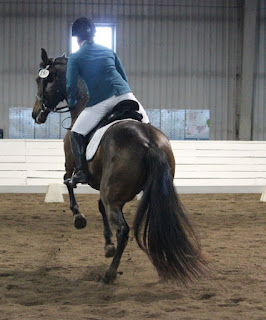 Despite the multiple canter meltdowns, she did also have some nice warm up moments and even a handful in the test, so I'll show you those before regaling you with the story of test two, lol. 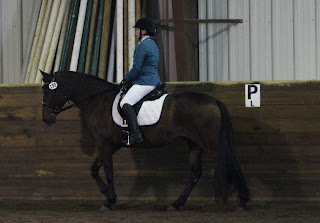 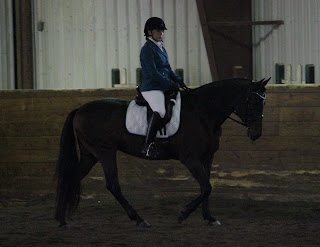 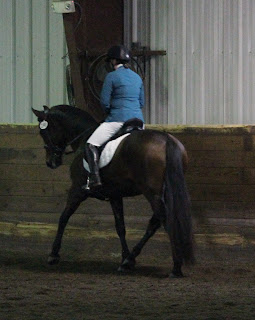 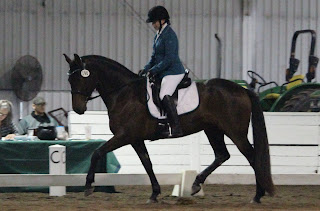 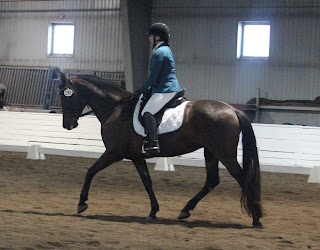 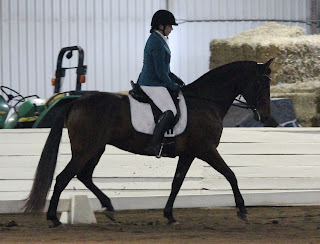 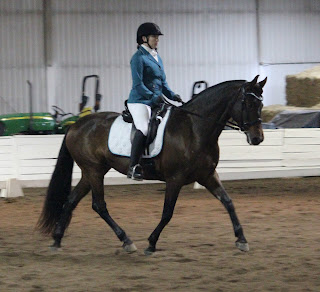 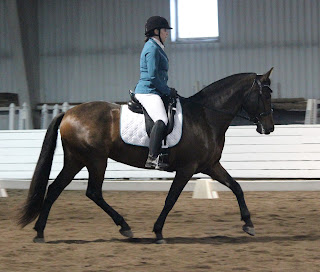 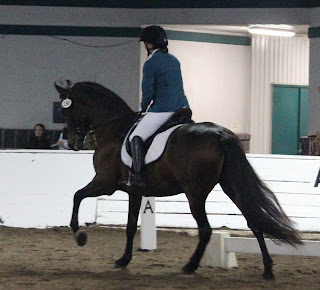 After the disastrous first test, we went back to the warmup, I dismounted and adjusted Ruby's saddle (thinking maybe possibly something was pinching her?) and then she proceeded to school 10+ lovely, NORMAL canter departs. I debated scratching our second test (particularly since the show was running behind and I had a time-sensitive appointment I needed to leave for pretty much the minute my second class was over), but decided it was more important to try again and see if we could replicate some of those great feelings from day one. 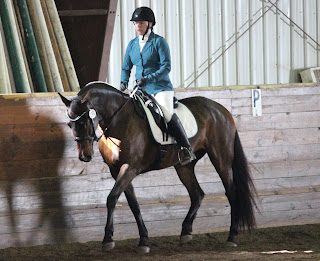 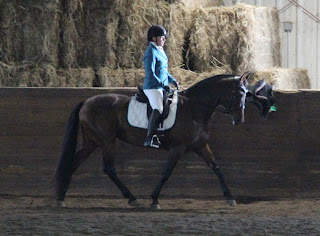 So we headed back down centerline for 1-2, me with a probably super fake grin plastered on my face until I figured out what horse I had... And it was like the switch flipped back to normal in her brain. She wasn't perfect, but she also didn't YEEHAW off into the canter. I am normally the person who is most down on myself with the most ridiculous case of imposter syndrome, but I RODE THE SHIT out of that test, and Ruby was with me every step of the way. It was perfect (for us) - similar to day one our stretch circle was an absolute joke, but I felt really good about the rest of it. 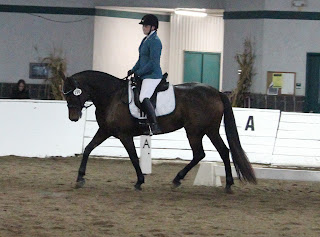 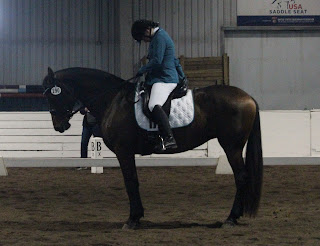 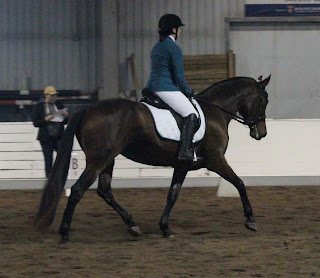 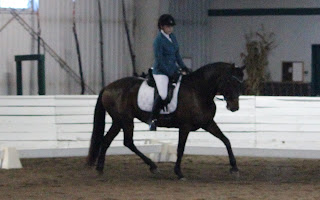 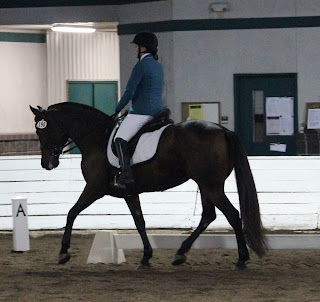 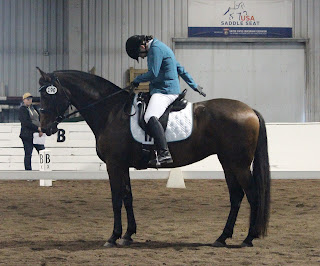 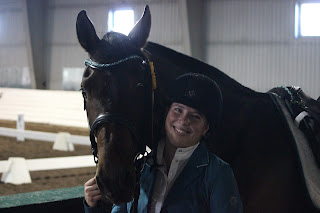 After my second test and us babysitting for the other rider in our class (on aforementioned handsome gelding), the show went on lunch break, so I hurried back to the trailer to strip Ruby's tack and send her home with DH - I drove separately so I could make it to that appointment. I got them on the road relatively quickly and swung by the show office on my way off the grounds to see if the test had been scored, and was absolutely floored to see we won our class with a score nearly 10 points higher than the disastrous 1-1 (for which we placed 3rd of 3). The judge was actually sitting nearby having lunch and overheard me say "no fucking way" (🤣🤣) so I went over to thank her so much for the useful feedback from all four tests, and apologize again for that uncharacteristic 1-1. She was so kind and encouraging ❤️ I honestly didn't read any of the test comments until later but once I did I cackled like a witch for a good 5 minutes.

And because I have ALL THE MEDIA from this show (bless both my husband and local horse friends!), enjoy the videos below!
Massive thanks to Lauren for the video proof of both this shit show test, and our redemption 🤣😍
Trying again, but better!

It was a really, really good return to the show ring for us. No, things didn't go perfectly, but having things go sideways reminded me that I can handle whatever Ruby throws at me and that we're both capable of this level. It was so nice to see so many local friends again this weekend - huge thank you to the friends who had encouraging words for us, grabbed media, and even read for us! My goals were to get back in the ring, have fun, and WEAR MY DAMN SHOW COAT - and I accomplished all three ❤️