Soooo far behind on posts, wow. Bad blogger! I already wrote my lesson recap from the weekend before last, but what I neglected to write about was a really fun trail ride the day before! I met up with some local(ish lol) friends at Rudolph Bennitt for a laid back ride. One of the ladies didn't have a horse to ride, so I used that as an excuse to get Cinna out - I let her ride Ruby and forced myself to ride Cinna lol. I also picked up one of the ladies who lives near me (trailerpooling FTW, no need for both of us to drive trailers up there with empty slots), so lots of driving that day! 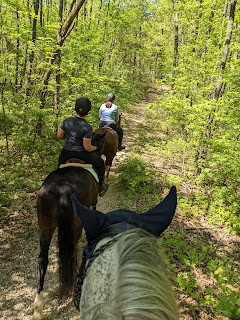 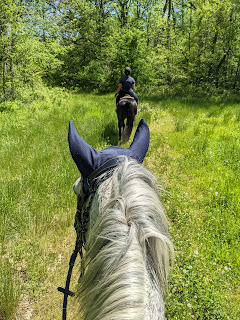 Predictably, Cinna started off a bit hyped up, and wanted to jig/put her nose up everyone's butt..... sigh. She also pulled her patented "spook and come to a dead stop and refuse to move", which of course caused a few traffic jams. About halfway through the ride she finally settled in and I was actually really proud of her! ........ annnnnnd then with no warning and for no reason whatsoever, she kicked the gelding behind us. Luckily for everyone she caught him in the meaty part of the chest, and isn't shod, so aside from being very wary of her for the rest of the ride (poor guy), he didn't seem to have any ill effects. He was following at a completely appropriate distance and was not in any way crowding her (plus he had literally run into her butt earlier on the trail when she stopped abruptly and wouldn't walk on and she didn't bat an eyelash), and she didn't even pin her ears or anything so still no idea what on earth set her off. I was MORTIFIED, because she's never offered to kick before, much less done it with no warning. Although in retrospect, I'm not actually sure she's been out on a ride with strange horses, its always just been with my other horses? Not that that's an excuse, just a data point to consider. I will be getting a red ribbon for any group trail rides and warning people to give her space, because I don't want anyone to get hurt :( I'm just thankful she didn't catch the rider in the leg, or anything on the poor gelding to do more serious damage. 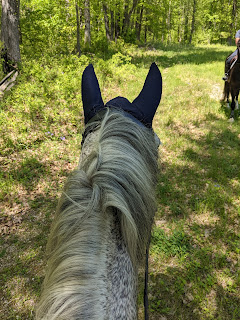 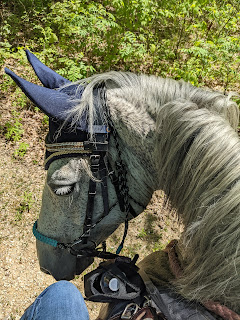 It was an otherwise laid-back ride -- mostly walking, but then one one of the wider grassy sections (I think its the carriage path) we let them trot/canter a little. Cinna pleasantly surprised me by being a complete adult about this and trotting reasonably without losing her marbles. Ruby of course was perfect - I think her rider might have answered a facetime call while trotting down the trail hahah. The day was warm so I think the horses appreciated getting sponged off back at the trailers and then hanging out at the trailers munching hay while we all socialized a bit. It was an excellent day!