Wow I've also been like, super bad at keeping up with my daily rides at home lately, lol. Looks like the last one I wrote about was when the saddle got delivered, which was two weeks ago at this point! Whoops. I just scrolled through Google photos and grabbed some shots and I'll try to recap anything I remember.

Missouri wasn't playing around and jumped right up into the mid-90s for an oppressive, hot week mid-May. It happened to coincide with my office getting renovated and being sent to work from home, which was perfect! I was able to ride a lot in the mornings, when it was still really muggy, but at least not also blistering hot. On nice(r) days, I am also able to fit in a ride on whichever mare I didn't ride in the morning -- had quite a few days where I managed to get both ridden, which always feels like an accomplishment! 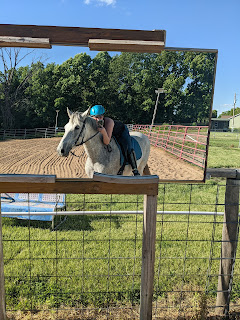 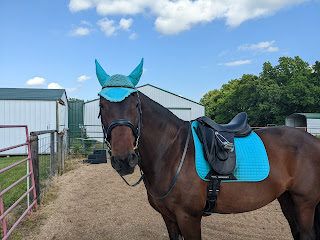 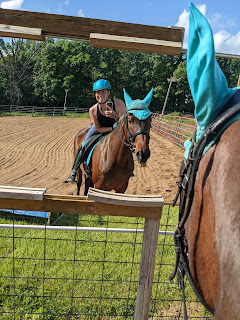 Oh and in other fun (but expensive) news, the Taj MahTeal is finally fully climate controlled! When we renovated it in 2020, I budgeted for a small portable a/c unit that also could do heat, but ended up not buying it at the time for... reasons I can't actually remember. I probably spent the money on something silly like a chandelier or something haha. Actually I think by the time we got to the end the unit I wanted was out of stock? Unfortunately the power situation in the shed wouldn't handle a mini split (which was my first choice), but this little unit gets great reviews, so fingers crossed. Previously I ran a dehumidifier during the summer, which kept things from getting moldy but Christ on a cracker it would be HOT in there from the exhaust, and then in the winter all my bottles and sprays and whatnot would freeze, which was a bummer. I was still nursing along the dehumidifier I bought in 2015 (yeah I more than got my money's worth haha), but it kicked the bucket the same day my new saddle arrived and even DH couldn't fix it. So my saddle got to live in the guest room while I waited for the new unit to come in. 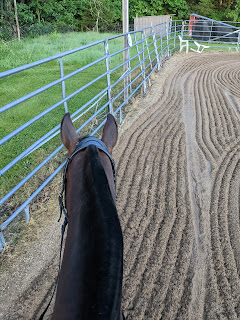 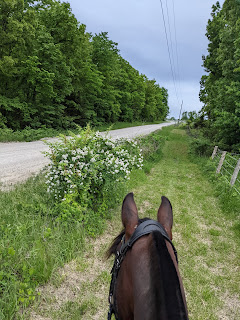 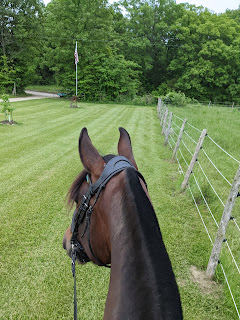 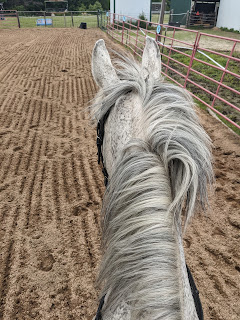 My hallway of the office renovation was completed at the end of last week, so I expected to return to the office full time, but I guess some more slots opened up in the pilot program of remote work (I cannot express how dumb I think it is that they're calling it a "pilot program" after like 60% of us worked remotely for 15 months with minimal issues during the pandemic but whatever no one asked for my opinion), so last week my boss squared away the paperwork so I can WFH three days a week and be in the office the other two, which is a really nice balance that I'm happy with. I do enjoy in person meetings and collaboration, and there are some things where it truly is simpler to poke my head in someone's office to ask them vs having an actual scheduled meeting about it, but this will still free up an extra 6 hours in my week that I won't have to commute (or buy gas, whew). I will work on shifting all my in person meetings to those two days a week and then all my virtual ones the rest of the time. I got my workspace in the guest bedroom all squared away again (although I need some sort of adapter to make my second monitor work), and we'll revisit the house addition for a dedicated office sometime down the line I guess - no sense in jumping the gun when materials are so insane right now. Yay!
Posted by TrainwreckInTeal at 5:30 AM