Fair warning: this post is lacking in media and text heavy -- sorry! :) but I did throw in a question at the end if you read that far!

I feel like most of the people I’ve talked to about chiropractic (not just equine, human as well!) fall into one of two camps -- either they love chiropractic or they think it’s an idiotic, expensive “junk science”.

Personally, I was exposed to chiropractic at a young age. In high school, after playing soccer for 10+ consecutive years (year-round some years as I played both indoor and outdoor) and waiting tables, I started having knee and ankle issues. After astounding my local chiropractor with my lack of mobility (he said he typically only saw joints so locked up on octogenarians), he called in another chiropractor who specialized in ankles and I underwent a series of lengthy visits and rehab using shock therapy and other rehab exercises/tools. Things improved enough for me to continue to play -- and play well! I led my varsity team in goals three out of four of the years I played, and was all-state as both a junior and senior. During college, I moved on from soccer to riding, which put strain on some of the same joints, as well as some new ones.

I did stop regular adjustments for a while in college and then post-college, when I wasn’t really riding. When I got back in the saddle a few years ago, one of the first things I did was figure out which chiropractors my health insurance covered and start going again. The first few months I went a LOT -- but now I’m down to just maintenance adjustments every few months. And while obviously it hasn’t fixed all my poor riding habits (wonder if I should have him look at my demon left hand next time!), I do know that it has helped me become more balanced in general, and specifically in my riding. I understand that anecdotal evidence is NOT the same as scientific evidence, and I’m certainly not suggesting that everyone and their brother run out and start getting chiropractic adjustments. But since it works for me, I’ll keep doing it.

Along those same lines, I do have my show horses seen by an equine chiropractor. If I’m expecting them to work reasonably hard and make progress, I think it’s only fair that I do whatever I can on my end to make sure they stay comfortable. I incorporate both massage (more on that in a future blog I suppose) and chiropractic into my show horses’ schedules on an as-needed basis. Because I got both Topaz and Ruby at a young age and have been involved every aspect of their training, they don’t see the chiropractor too often -- Ruby actually just had her first visit earlier this month at the age of 5. I imagine if I were seriously trying to ride and compete my OTTB Jack (especially in dressage!), he would need frequent adjustments to stay comfortable, just from his history. Topaz had normal maintenance adjustments when she was in regular work, and then after she recovered from a lengthy lameness, I made sure she was adjusted before she went back to heavy work. 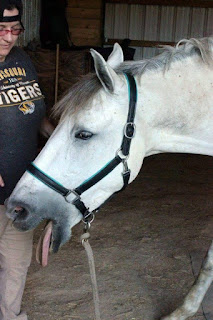 Ruby had a massage earlier this winter and her masseuse pointed out a few potential problem areas she recommended I have the chiropractor check out (isn’t it nice when professionals can work in tandem without having a pissing contest?). And of course, when Ruby was adjusted, those were the biggest areas that needed attention. She was out in her poll, low neck, and right hip. A few other areas needed adjustment, but nothing major. She’ll probably skip his next few visits (he comes once a month or every other month to see some lesson horses in my barn), but she’ll be seeing him again at some point I’m sure! We did have some much nicer work to the right the lesson after she was adjusted, but that could also just be me riding better with someone supervising me.... haha.
Again, in case I didn’t make my point clear enough -- I understand the lack of scientific evidence supporting things like chiropractic. And believe me, I’m a HUGE fan of science. But I’m also a huge fan of personal experiences, so if something works for me, I’m going to do it, science be damned. And since it’s my money being spent on my horses, anyone who doesn't like it can mind their own business.
And obviously, this post has shown me the importance of good media not just with riding, but with all things I want to blog about! I will have to take good pics next massage before I can write about it.


So what do you think? Do you have your horses adjusted or massaged? Why or why not?

Posted by TrainwreckInTeal at 4:09 PM