There are definitely some pros and cons to living in a small town in the Midwest. I grew up in the suburbs of Saint Louis, so the initial transition was a little rough. It took me about a year to remember that the closest gas station to my house (which is also a general store) is closed on Sundays. Even stores in town close at what I consider ridiculously early times. However, the slower pace and friendly people more than make up for some of the downsides.

One of my favorite aspects of living in the country is the local tack/livestock auction. It's actually in the next county over, so about a 40 minute drive, but totally worth it! The first Friday of every month they have tack and then horses. Sometimes we take a big group from the barn, sometimes it's just me and one or two friends. Frequently, I tote along a dachshund. 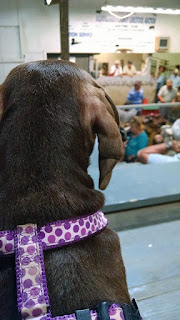 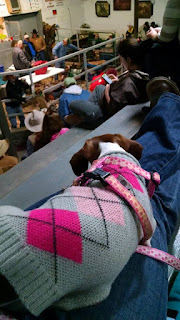 It's mostly cheap dealer tack (Weaver, Tough 1, etc.) and mediocre western tack. However, I've managed to score some really fun deals there! And even when I come home empty handed, I've usually had a fun evening with friends. Tonight, I scored a teal/black/white western saddle pad for $2 (which will come in handy when I trail ride in my Circle Y!), and a 75" fly sheet for $16 (brand new, in the package -- looks like this particular sheet retails for about $55 on Amazon), so I was pretty excited! Not pictured, the Aussie saddle and some other fun stuff my friend Hanna also bought tonight. 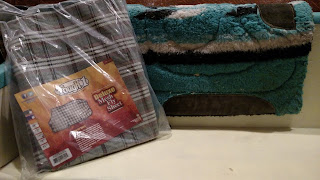 Some of the past awesome deals include: a pair of Double K clippers (needed minor repair, total investment about $50 -- although now I do need to replace the cord... but still, they're $430 clippers!), a vaulting suricingle, so many teal things (halters, lead ropes, buckets, hind shipping boots), a bucket full of rusty clipper blades (I had a plan to clean them up and sharpen them -- they're still in a bucket in my shed, oops?), a Health E-Z Hay Feeder, and more! 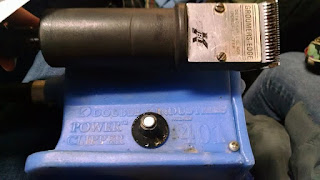 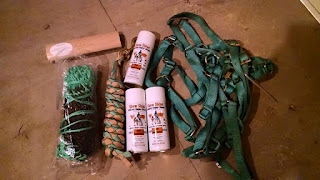 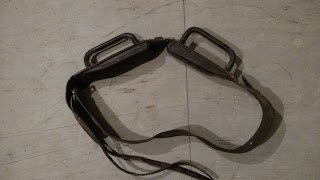 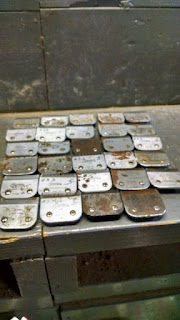 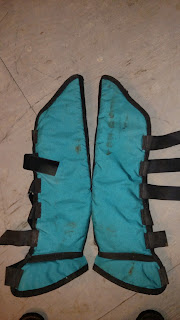 After the tack is horses -- to date, I've managed to not come home with anything alive. I've had 2 close calls: once, a half-Andalusian weanling filly ran through, but they didn't have any paperwork for her (so not registerable). Another time, a cute little Arabian stud ran through. He ended up being purchased by a friend of mine for less than $100, and if she hadn't bought him, I probably wouldn't have been able to resist. Gelded and with some training, he would have been a cute kids horse!

I usually leave after the first few horses run through. Most of the stock is in bad shape (thin, overweight/foundered, long hooves, lame, etc.) and a lot of them go to the kill buyer. It gets pretty depressing to watch. I can't take DH at all -- he has a weird obsession with mules and I'm pretty sure I wouldn't be able to keep him from bidding if they run one through while he's there.

Posted by TrainwreckInTeal at 10:40 PM