It was a nice, cool 90 degrees today :) and sadly, I'm not joking at all, haha. After work I made a quick pit stop at the gym for a brief workout then came home to start the real part of my day -- horses! 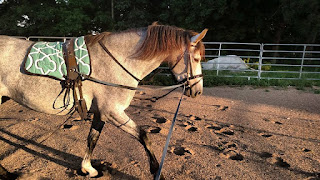 I headed out to ride Ruby first -- with the heat advisory yesterday, I gave her the day off, but we did put in a brief arena workout on Wednesday evening (I experimented with riding later in the evening instead of right after I get home from work). It had been a bit since we'd done any field work (waiting for it to be baled), but since that got done last weekend, I decided to head that direction. One side of the field is bordered by some trees/brush, so in the evening there's a nice long shady strip to ride on. We did lots of baby leg yielding at the walk (we had reasonably nice zig-zags, I was pleased!), trotwork focusing on various degrees of bend, and even a few canter passes. In our last lesson she had trouble picking up her right lead (that's always the sticky one with my horses, so clearly I'm teaching my canter departs wonky) but she nailed it every time in the field -- of course, she also picked it up twice when I asked for the left, so that was less exciting. 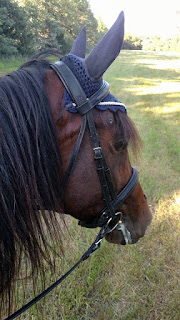 To cool off, we did a partial loop of one of the trails that branches off from the field. I cut that pretty short because the bugs are starting to come out in full force, and miss prissy princess does NOT like bugs on her legs. If she thinks she has a bug on her, she'll stomp her front legs as hard as she can while she walks -- very entertaining. We got back and I hosed her and turned her out to graze (and dry off) in the grazing paddock while I put everything away. There's a picnic table out behind the barn so I hung out and just watched her for a bit. It's always very calming after a long work week!
After I got home, there was just enough light to give Cinna a brief workout. She cross-tied and tacked up like a champ, even though she's had a few weeks off. We worked through the scary parts of the arena, and I actually had to kick myself for not bringing a lunge whip -- when she first started work last fall it was very easy to "go", not so easy to "whoa". Now that she is getting the hang of it, she wants to be lazy. I won't complain about that, I'd rather have a push ride than a horse I'm constantly trying to slow down. After her workout we took a hike out to the back pasture to the entrance of the trail. I'm trying to get her used to hand-walking on the trail so I can start ground-driving her on it, and then eventually riding it (I get really bored in the arena)
On the way out there, I decided to work on some trotting in hand. Because I didn't haul/show her in halter as much as I did Ruby (or you know, at all), she has a little trouble wrapping her brain around it. If I run next to her, she thinks it's a race and takes off at the canter -- not the point. About the time she finally got the hang of it, the clip on my lungeline broke (that's what I get for using a crappy old lunge line instead of one of my decent ones). She high-tailed it back to the barn, making a pit stop in the arena. After I caught her and got a new line, we headed back out to where we were when the clip snapped, hung out for a bit, then came back. The running back to the barn had gotten her a little sweaty, so after I untacked her I parked her in front of a fan while I cleaned stalls. She was impatient in the cross-ties at first, until she figured out how good the fan felt, then she decided to doze off. I had to wake her up to put her fly sheet back on and turn her out -- what a goober. 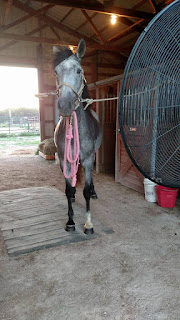 Tomorrow I'll be up early and heading out to a Greg Best clinic -- I want some more good jumping photos for the CDCTA website, and since nobody has submitted any (other than ones I took at various shows over the last 5 years), I decided I would head out and take some myself! I love photographing jumpers, and I've heard really great things about the Best clinics, so I'm really looking forward to it. And since I'm not riding, I have an excuse to break out some shorts or capris and try to get some sun on my blindingly white legs (#sorrynotsorry spectators! haha).
Posted by TrainwreckInTeal at 8:18 PM