OK so now that you’re caught up on my equally wonderful (vacation) and miserable (death in the family) December, and I’ve wowed you with my 2017 goals (hardee har har), let’s move on to what’s actually happening in January! In a nutshell? Nothing. DH and I spent Sunday (the last day of nice weather) visiting family. I was off work on Monday for a state holiday, but didn’t do anything other than stuff Ruby full of candy canes because it was drizzy and gross.

Tuesday I did manage a quick lunge… but in the spirit of complete honesty, I only went to the barn so I could try on her new silver DSBs and teal fly bonnet I got for Christmas. I know, I’m the worst. There was a pole out in the arena so I incorporated that into our lunge session. Ruby was quite offended when I asked her to lunge in smaller circles over the pole, but I think the faux indignation was more due to the ridiculous amount of time off than actually being upset about anything. We had a pretty drastic temperature drop Tuesday as well, which can produce some pretty exciting reactions! Her canter departs were… dramatic. Once she got her snorting and flailing out of the way, she was great.

Wednesday was even colder (side note: Apple users, if you’re not getting your weather from WhatTheForecast, you should be. Us poor Android users are stuck with HumourCast).
Buuuuuuut because my new Majyk Equipe boots arrived, of course I had to go put them on Ruby. My stupid phone (that hates cold weather) died approximately 18 times while I tried desperately to get ONE photo of her new boots (and blingy bell boots, haha), but this was all I got. I LUFFS them. I can't wait to get photos of them actually in ACTION. They will probably end up being Cinna's boots (because the silver DSBs will look better on Ruby), and the bells will as well (too small for Ruby), but I was desperate to try them out, so Ruby never minds being the guinea pig. We mostly walked (it was hella cold).
I know this is a personal preference, but I try to avoid working my horses if it’s under 20 degrees. I might do some bareback walking, or a super abbreviated lunge session (with LOTS of warm up and cool down walking). I could give you any number of excuses for why that’s my temperature cutoff, but mostly it’s because I ride for fun… and when it’s so cold that it hurts to breathe, I don’t find it fun. I find Netflix and my couch full of dachshunds fun. 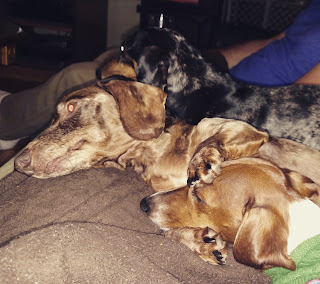 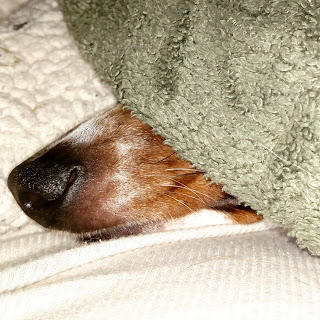 Do you know what I like even less than cold? Cold precipitation. I missed December’s icy snowy fit (by mere hours, as I boarded a plane to Puerto Rico haha), but never fear, January is here! Last night it started snowing and it was still flurrying on my commute. It’s not so much that I mind the actual snow, I just find it annoying that I have to go out and drive in it and do things. It can be fun for photo ops and things, but unfortunately, we’re still in the portion of the year where I leave my house when it’s dark and it’s basically dark when I get home. Boo. 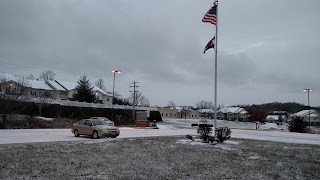 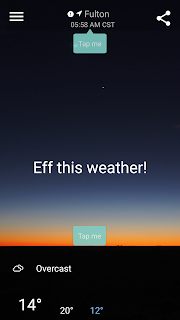 It’s supposed to be a whopping 31 degrees on Saturday, so maybe I can get out and do something!
Posted by TrainwreckInTeal at 6:30 AM