One of my only caveats to buying DH a drone for his (very early) birthday gift this year was that I wanted him to video me working horses. Not that I think the videos will be particularly riveting, I just think it's a unique perspective (on top of being a good training tool). Over the last few weeks, every time he takes the drone out, I had him "buzz" the horses so they get used to the sight and sound (mostly the sound because it's annoyingly loud). 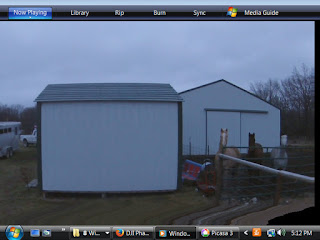 Saturday the weather was nice enough that I wanted to work Cinna at home as well, but the arena still hadn’t been dragged. So Sunday morning I begged and pleaded, and DH headed out to try to start the tractor. I say try, because it’s been very finicky lately, and Sunday was no different. While I did all the chores, he tried various methods of getting it started. Finally we gave up and pull started it with one of the trucks (never my favorite endeavor!). While it was running, DH got both the arena dragged and the dry lot scraped a little. While he did that, I just played with the horses. 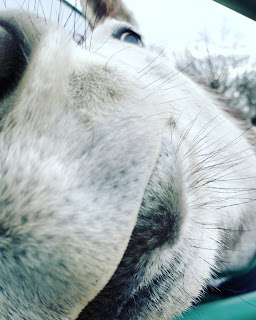 It was still pretty chilly and breezy when he finished up, so we went back inside to let the arena dry out a little more. After a few hours, it was as warm as it was going to get (although still breezy), so I layered up and headed out. I spontaneously decided that it would be Cinna’s trial by fire with the drone – she’s exceeded my expectations with everything else so far, so why not this? I shot off a message to one of my group chats about my plans, and was met with healthy skepticism. And by healthy skepticism, I mean they immediately started laying claim to my possessions if I died. What else are friends for?
I pulled everybody in (the last thing I needed while I was trying to ride under the drone was my idiot geldings running around adjacent to the arena) and walked Cinna out to the cross-ties. I had doubts about the intelligence of my plan when her first reaction upon leaving the barn was to dolphin leap through the air squealing and then slip in the mud and almost go down. She was pretty ‘up’ in the cross-ties, but did let me get her tacked up without any major incidents. I booted her up all the way around with my new favorite ME dressage boots, and promptly remembered she hasn’t worn rear boots when that set off a round of leg shaking.
We made it into the arena and commenced with a little lunging to get her focused on work and express any remaining ya-yas. DH fired up the drone, and spend most of our warm up filming at varying altitudes and distances from us in the ring. This prompted a few… unscheduled departures as she attempted to flee the scene at top speed, but she always came back when I asked, and eventually worked quietly W/T/C on the lunge no matter what the drone was doing overhead.
In the interest of matchy-matchy, I put my new blingy turquoise bell boots on Cinna (even though they don’t 100% match the ME boots so it makes me twitchy). They lasted less than 10 minutes. Unfortunately even though I got mediums (since my horses are fairly normal sized without being either midgets or gigantors), they were a touch too small for Cinna. This made it easy for the fasteners to fill up with the sand arena footing, causing the Velcro to be…. Less than effective. It also didn’t help that Cinna has an insane overreach, and kept grabbing them. After the third time she tore one of them off, I caved and pulled them both off. In the process, I noticed that she ripped one of them pretty badly – boo. Very disappointing since that was the first time I’ve actually really used them. Oh well. 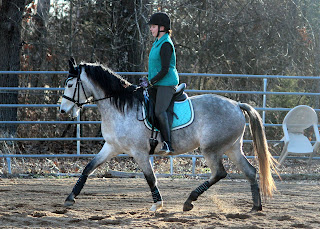 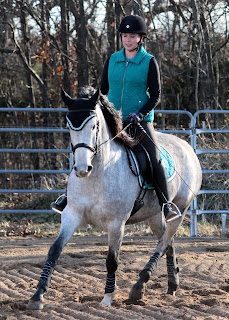 I had DH pull the drone down when I went to get on. My primary goal was to have a useful work session. If we could send up the drone and get some fun footage, that was just a bonus. She wasn’t thrilled about standing still at the mounting block, but I waited her out and she eventually stood quietly for me to climb on. She still felt pretty lit under saddle to begin with, and she had a complete and utter meltdown on one side of the arena (DH had set his drone on an overturned water tub on the far side of the fence). I had him move it, and got her brain back to me with a lot of changes of direction and bend. 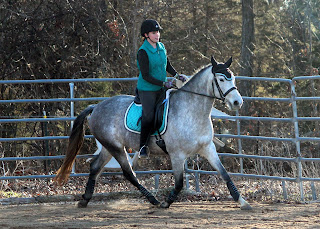 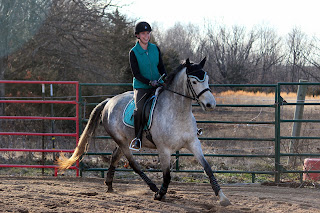 Our initial canter to the left was a shit show – she was absolutely convinced she COULD NOT turn left at the fence, and almost hit it several times. So we regrouped, and attempted some right lead canter. She was a superstar, so after some more changes of directions, I tried the left lead again. Much better! Steering was back and fully functional. 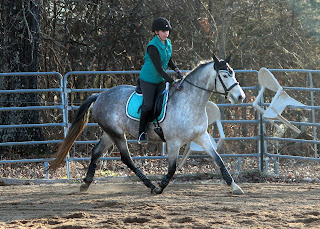 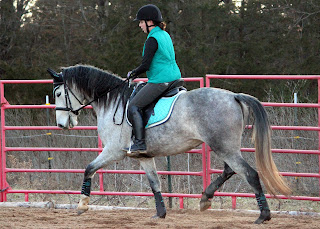 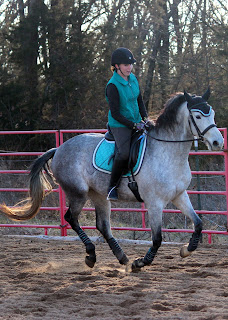 She was woefully out of shape (as am I, obviously), but at the end when I felt more comfortable, I loosened up and even pushed her a little for one last trot pass up the long side of the arena. She felt SO GOOD and as I grinned from ear to ear, I knew DH had to have gotten some good shots of it (I brought the still camera too, just in case the drone thing wasn’t happening). 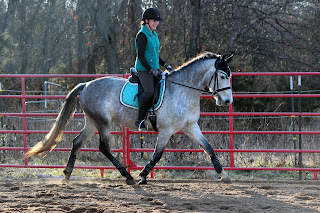 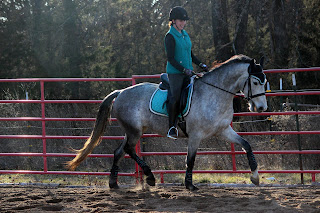 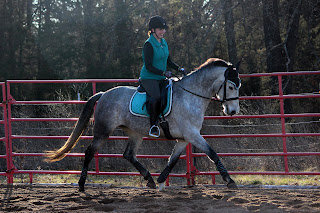 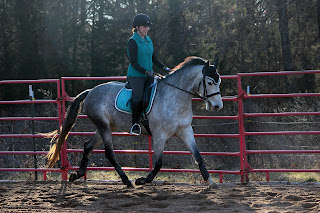 We had a nice long cool-down period, and I told DH to send the drone back up. Pretty sure he was convinced I was going to die, but he did it anyway. She flicked an ear at it and had a few tiny jumps, but overall, she stayed focused on me and trusted that things were okay. She was being so good I even worked on our free walk a little (giving her rein to play with is not always something I’m willing to do in the beginning of a ride). Before we quit, I even did one big circle of slow trot and a centerline, just to give DH practice with trying to follow patterns with the drone. She deserves all the cookies in the world for being such a tolerant baby horse! This video is just some walking when he sent it up the first time -- the one with trotting and centerlines is longer and hella boring so I need to edit it down a bit!
Ride #15 in the books – love this horse. 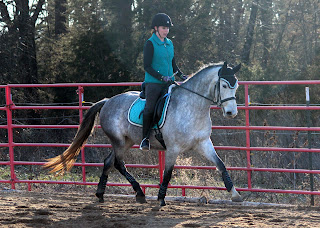 Although apparently my friends were kind of sad I didn't die.....lol. 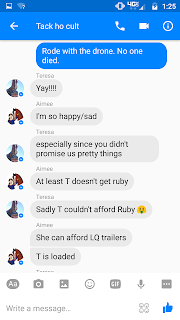 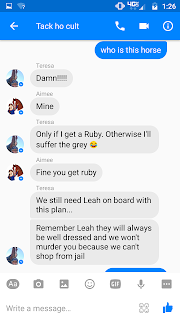 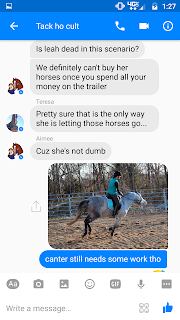