Mother Nature needs to take her meds. For real. I took Friday off work because they were forecasting a wicked ice storm (Winter Storm Jupiter, in case you care). The whole week leading up to it was hype hype hype -- as in, the governor actually declared a state of emergency Thursday before anything even happened. DH is considered "essential personnel", so he has to be at work no matter what happens. With the amount of ice forecasted, there were warnings of power outages. Since we have electric heat, pretty much any time there is a threat of power outages, I stay home from work. No big deal, I accrue a shit ton of vacation every year, gotta use it for something. 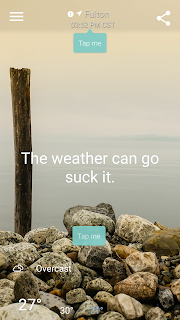 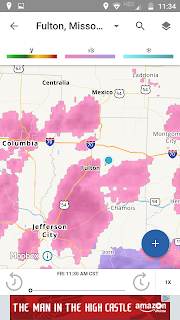 Thursday I wrapped up all the work stuff that couldn't wait over my 4-day weekend, and then came home and prepped the farm. We got the generator out and ready, extra gas, and set up a propane heater as a last resort. I dragged extra hay into the barn, made sure the heater was on for the barn cats, and snuck out briefly to visit Ruby. Friday morning, I waited for the storm to arrive. And waited... and waited some more.
Finally, around noon some precipitation started. It looked deceptively light, so I crashed out on the couch to make a dent in my DVR. Around 3, I made a walk around the property to make sure everybody was okay, and almost landed on my ass about six times. DH got off work around 4, and we debated the merits of him trying to make it home (they keep cots at the prison for weather events like this). I sent him some photos of our ice thickness, and he decided to try it. Apparently, the ice was much thicker in the city where we work, but MoDOT had been fairly on top of salting, so the roads weren't too bad (I'm SHOCKED. The last few winters MoDOT has been fairly useless). 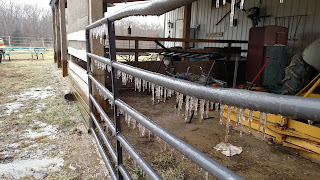 Saturday, DH got up extra early to head to work. I held down the fort at home (code for more catching up on my DVR, haha). I did manage to be marginally productive, as the temperatures slowly rose and the ice started melting. The most exciting thing about Saturday was the eagerly anticipated arrival of my new bridle for Ruby, a PS of Sweden knockoff I scored from a FB swap site. 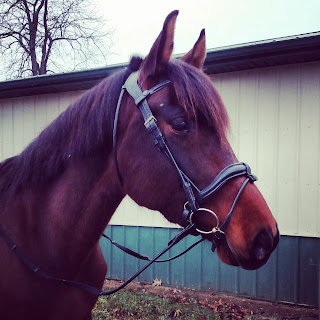 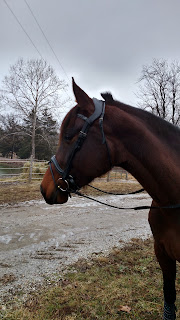 Of course, this meant Ruby had to spend some time modeling it when I went out to the barn to do chores. The noseband is comically large, but I think if I punch some holes in it and trim the excess leather, it'll be just right! I will be taking the flash and probably the throatlatch off, I just wanted to mess with all the pieces. 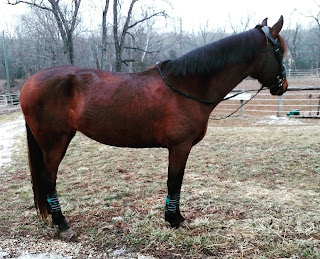 The massive amounts of precipitation makes riding outside in the near future unlikely (boo), but at least we didn't have any power outages or major shenanigans from the ice storm!
Posted by TrainwreckInTeal at 6:00 AM