Year-End Awards and Escaping the Arena

Last Friday was the 2016 awards banquet for my local GMO, the CDCTA. Although showing wasn't a major priority for me in 2016, Ruby did manage to rack up enough scores to garner the title of Reserve Champion at Training Level. The fun thing about our GMO is they give you choices for the year-end awards. For 2015, when both Topaz and Ruby won awards, I got some fun Irish knit anti-sweat sheets, which are perfect for horse shows (minus the fact that they're WHITE -- I have teal dye and keep meaning to dye at least one of them teal.... lol).
This year, one of my choices was a helmet bag, which was perfect! I sold my last helmet bag as part of a set when I was planning on replacing everything with the Kensington black ice pattern. However, the cost of the Kensington stuff (and the availability of the helmet bag) had delayed my purchase. And then I ended up with all the fun Art of Riding stuff, so I was kind of holding out for a helmet bag that matched my current set. This helmet bag should get me through in the interim, and it's surprisingly spacious! Plenty of room for my gloves and hairnets and bobby pins and whatever other junk I want to shove in there.
Although I knew about the year-end award, the night still offered some surprises! I've served as the VP for the club for the last year, but our current President was nearing the end of her term. She had served as the President for several years, and was definitely ready to pass the torch. Last fall, she and several of the other board members talked me into accepting the nomination for President (which I qualified with the caveat that I would step aside if anyone else qualified really wanted it). No one else had a burning desire, so I now officially have my own gavel and the responsibility to run meetings. Scary thought, huh?

The biggest surprise of the night was receiving the President's Award -- while I would volunteer with a smile no matter what, it was really touching to know that my efforts last year didn't go unnoticed, and that I am considered a dependable club member who can always be counted on to lend a hand. 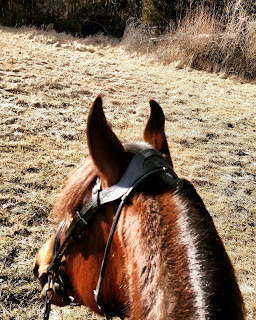 The awards banquet kicked off a really great weekend. Saturday, some barn friends and I escaped the arena for a mini-trail ride. Although we only got out for about half an hour, it was still really fun. It was cold and windy, but layering helped -- a little. The woods felt great, and the footing was fine. The open fields were a little cooler, but it was worth freezing a little to have some wide open space! 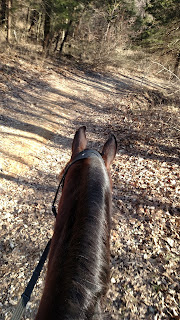 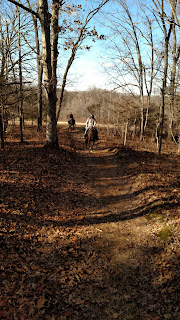 Ruby started off very calm and forward, but in the places I usually let her trot and canter, she got a little antsy. While trotting and cantering the hills is great conditioning, I need to remember to make her just walk sometimes. After she got amped she was very hard to settle, and spent most of the second half of the ride jigging, because she wanted to GO. After we made it back to the barn, I took her into the arena and burned a little energy trotting and cantering in there for a bit. 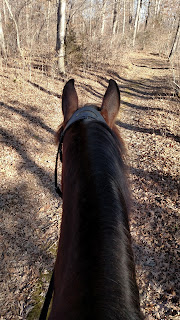 Best way to end a Saturday night? Spending half an hour unwinding in the hot tub with DH after a delicious steak dinner. Yum!