I love state holidays. I slept in until almost 7 a.m. today -- amazing! I really meant to write this post last night and schedule it for early this morning, but clearly that didn't happen. Oh well. I'll blame complete and utter exhaustion from spending the vast majority of Friday, Saturday and Sunday outside doing ALL THE THINGS! Friday after adulting for a little while (working on stupid taxes), I went outside and played with Cinna.
I started by clipping her bridle path and cleaning up some of the goat whiskers under her chin. Considering how little work we've done on clipping, she was tolerable. Then we had another trailer loading session, which we quit early on because she followed me right on like a champ, no hesitation, about four times. Hopefully that translates over into the next time I actually need to take her somewhere... We also went for a hand walk out on the trail, detouring by the mailbox. She spooked at the mailbox, so she got to eat treats off it. We looped through the back part of the trail, and she dragged me over to one of the stumps that scared the crap out of her last time -- apparently she remembered my "eat cookies off it until it's not scary anymore" training method and thought she better check.
After I finished up with her, I headed out to hack Ruby on the trails. We had some company for part of the first loop, which was nice, but then we finished up alone. Lots of trotting in the hay field! I also took a shedding blade to Ruby and started pulling off some winter coat. Although with the weather we've been having, there's no doubt spring is coming! 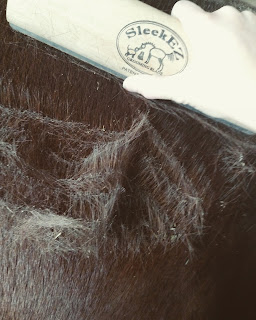 Saturday I was productive around the farm in the morning, and then had an absolutely epic afternoon at the barn with Ruby! Ruby and her new trail BFF Molly did 3 separate loops out on the trails, leading out two of the newer boarders. I just wanted to soak up as much of the sunshine and beautiful weather as I possibly could, since there's no way it can last. 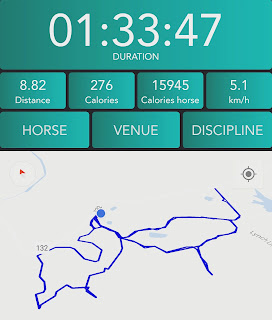 Sunday my initial plan was to trailer Cinna off-farm for her first big trail excursion, but that plan had a small hiccup -- I haven't received my updated Coggins from last week's vet visit. Typically I have them electronically the same week, so I need to call up there and see what's going on. Even though in more than 10 years of hauling my horses out to trail ride, I have never actually been stopped and asked for a copy of my Coggins by anyone, I figured better safe than sorry, so we stuck to the house. On the plus side, not having to spend two hours trailering out and back to a trail gave DH and me time to get some serious stuff knocked off our to-do list.
We also managed to fit in a ride on our "trail", looping back and forth a few times totaling probably a mile and a half. Cinna was pretty "up" and jigging the first pass or two, but she did eventually settle down and flat walk. We even managed to pass quite a few scary stumps without needing Trigger to give us a lead, and she didn't react at all when a branch noisily whacked me in the face/helmet (my fault, wasn't paying enough attention). 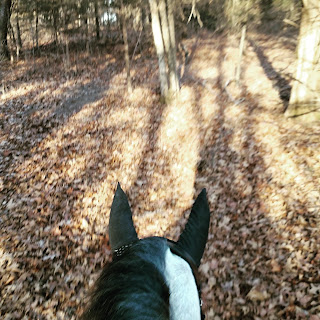 We did plenty of stopping and standing, and she was a champ when I had to climb off and then remount after my FitBit fell off. She was less of a champ when we circled through the back pasture to finish off, threatening to bronc and just generally being a little obnoxious. So we did some figure eights at the trot around Trigger until the naughty fit passed. It was so warm that both horses were sweaty (Cinna from the extra trotting and Trigger because he's essentially a wooly mammoth right now), so they actually got hosed off. Outside. In February. What the eff Mother Nature? I don't mean to complain because I really have enjoyed all these random 70+ degree days, but I have the awful feeling it will be like 120 this summer to make up for it. Or we'll have a blizzard dump a foot of snow next week. Or something. 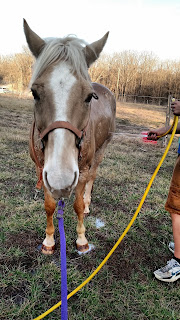 Of course, being horses, they immediately ran out and covered themselves in filth. But it's okay, they're calling for rain today so hopefully they get a good rinse off ;) Aside from enjoying my day off by sleeping in, I'm also prepping for tonight's GMO meeting -- my very first as president! I need to write up my agenda and make sure my gavel is in good working order... haha. 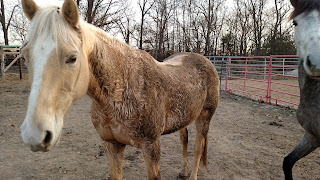 Over the weekend I also had a chance to pull some GoPro footage off my friend's camera that she always brings out when we trail ride -- enjoy this footage of me cantering Ruby through a field at Rudolf Bennitt last week, including some hands-free cantering. Love that horse <3
How about you? Is anyone else experiencing freakish good (or bad) weather?
Posted by TrainwreckInTeal at 7:58 AM