Trying to get back to the daily grind after an epic equine weekend always feels a little rough. Tuesday was Valentine's Day, but I will still able to sneak in a quick ride on Ruby after work. She apparently had a bad case of the dumbs and forgot how to horse, and seemed to be completely and utterly baffled by the application of any and all aids. Like seat? What's that? Leg? No comprendo. Steering? Can't. I got a wee bit frustrated and after we'd both worked up a sweat, I finally just made her walk umpteen laps of the arena and we worked on stopping off my seat. About three laps in apparently her brain poofed back into her skull, and then she was fine.
Wednesday I focused on Cinna -- if I'm going to show her next month she clearly needs wayyyyy more work, and I wanted to see if the teeth float changed some of her bit-gnawing tendencies. She was marginally more pleasant to bridle than she's been over the last few weeks, and then she worked really well. She came out wanting to run at mach 10, but took correction quite well and soon was peacefully W/T/C both directions. I tossed the Vienna reins on her, but left them loose. I did notice significantly less chewing on the bit, so yay, progress!
We also worked on trailer loading, since it was still hooked up and over by the barn. Cinna either loads like a champ, or throws a massive hissy fit. Since every other horse I have basically self-loads, this very much annoys me. I know it's a symptom of lack of practice, but I also frequently forget to practice, so Wednesday I decided to remedy that. I loaded my pockets up with cookies and went over and opened the doors. 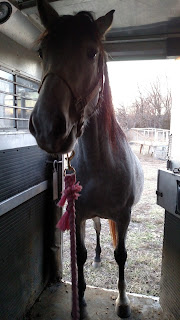 I know some of her issues when she's being a pill about loading come from me and my expectations, so I have to learn to dial it down a notch and be more patient. Hopefully frequent practice when I'm not on a schedule will help make it less of an event for her. I climbed on the trailer and pulled out my phone, and it took less than 5 minutes before she got curious enough to join me. After three successful loadings/unloadings plus some time just tied in the trailer eating hay, I called it a day! 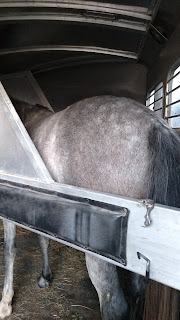 Thursday the weather was unseasonably beautiful again -- I feel like some of you might be getting an inaccurate idea about what our weather is usually like in February. Usually it's cold, snowy and miserable, not sunny and 60+ for weeks on end. I'm sure we'll pay for that weather somehow, but for now, I'm just going to enjoy it. I made it out to the barn in record time, and took Ruby out to hit the trails. 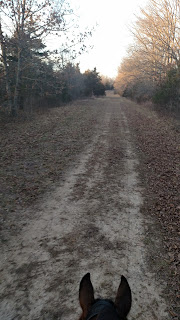 We had enough daylight to do both main loops of the trail (although just to be safe on timing, I did lots of trotting/cantering -- wheeeee!). We ended in the hayfield with some trot sets. She was pretty wired from the cantering earlier, but she did eventually settle in to power trot up and down the length of the field. I really wish someone was there with a camera -- towards the end she was giving me this insanely floaty trot and she felt so connected. The slightest adjustment of my body and I felt like I could move her anywhere I wanted. Maybe over the weekend I can convince DH to bring out the drone and give it a shot! 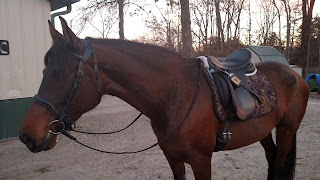 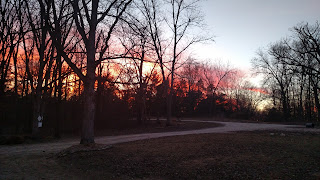 Today I took a vacation day from work to get started on our taxes (since I can't seem to find any time in the evenings to make a dent in them), and I'm hoping if I finish up early enough, lots more horse time!
Posted by TrainwreckInTeal at 7:17 AM